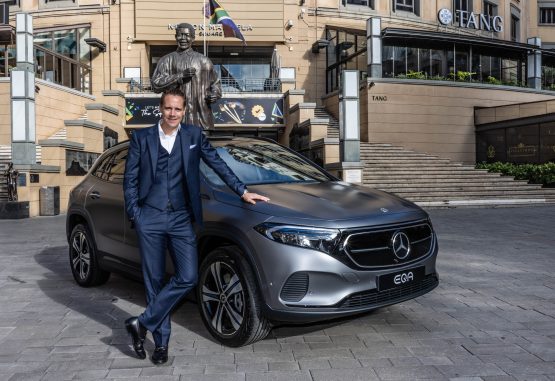 Mercedes-Benz South Africa (MBSA) is opposed to the government’s plans around subsidising electric vehicles (EVs) to make them more affordable, but believes there should be parity between the import duties imposed on internal combustion engine (ICE) vehicles and EVs.

However, Raine said he is “not a fan” in the South African context of a subsidy for EVs as happens in many other global markets.

This is despite MBSA having a target of EVs accounting for 50% of its car sales by 2026.

“I wouldn’t think that [EV subsidies] is a good idea for South Africa looking at the context in which we live in South Africa – and don’t think it will be sustainable. I’m not for a subsidy but for price parity,” he said.

Most developed countries provide subsidies to reduce the cost of new energy vehicles (NEVs) in their countries and most vehicle manufacturers in South Africa are believed to be in favour of subsidies for EVs.

Automotive business council Naamsa and other auto industry stakeholders have been in discussions with the government on the Auto Green Paper, which was published in May 2021.

Naamsa CEO Mikel Mabasa said this week that each and every vehicle brand has its own strategy based on what is happening in other markets and what they would like to happen in South Africa.

“From a Naamsa viewpoint, we don’t want to take a position that we agree with this view and do not agree with that view. It’s not our decision to make. It’s a government decision. Once government has made that call, all of them … will then have to play by the rules that South Africa will set,” he said.

Raine admitted it is an ambitious target for EVs to account for 50% of MBSA’s sales by 2026.

Raine said in terms of the transition to EVs, South Africa is undoubtedly at the tail end and other markets have already gone in that direction. But this provides all stakeholders, including the government, with the ability to pick and choose the set-up for EVs, [based on what] has been made in other countries.

Raine said Daimler, MBSA’s parent company, has taken the decision to go fully electric globally by 2032, which is why MBSA is pushing so hard in the South African market to achieve 50% EVs sales by 2026.

If MBSA did not facilitate this transition in South Africa, its sales in 2032 would not be 100% electric and “we wouldn’t have anything to sell anymore”.

He said MBSA will facilitate the transition to EVs in South Africa by introducing the most complete range of EVs in the luxury segment and will have five EVs in the market by the end of this year – the EQA, EQB, EQC, EQE and EQS.

Raine referred to the European Union’s announced ban on ICE vehicles by 2035 and stressed that this will have an impact on the South African market and also on MBSA’s production footprint in the country.

“That is something which, over the next six to 12 to 18 months is going to be the main topic of discussion between us, the government and all stakeholders in the automotive segment,” he said.

A total of R13 billion was invested in MBSA’s East London production plant for the new C-Class, which was launched earlier this year. The plant is one of only three plants globally that produce the C-Class.

Raine stressed the investments made in the East London plant mean it is state-of-the-art in terms of its parent company’s global production footprint.

Apart from producing the normal ICE C-Class, the plant also produces the C-300E, the state of the art plug-in hybrid that is exported worldwide, and the company’s AMG performance vehicles.

Raine said the plant matches up with any other production plant in the world and the investments have made it “future-ready for the next seven years of the lifecycle of the C-Class”.

“Do we have that answer right now? No we don’t because we are still in the planning stages,” he said.

Raine said apart from the need for import duty parity for ICE and EVs, two other important things need to happen to facilitate the transformation of the South African market to EVs.

These are the need to have:

Raine said EV accidents are bound to happen and there must be people and companies “who know how to handle these very complex ‘computers on wheels’ going forward”.

Too much is made of the charging infrastructure thing imo. (I am on my second EV)

It is an issue for reps and the occasional long-distance trip, but some filling stations are putting in fast chargers. For the rest most people do maybe 100km a day that a normal charger handles easily whether at work or at home. At work : a carport size of solar gives both shade parking and generates enough kWh whether direct into EV or into the work’s loads or export to grid to offset 40,000km a year of driving for the next 25 years. It is cheap say R50,000 one-off for a million kilometers of free and entirely carbon free energy.