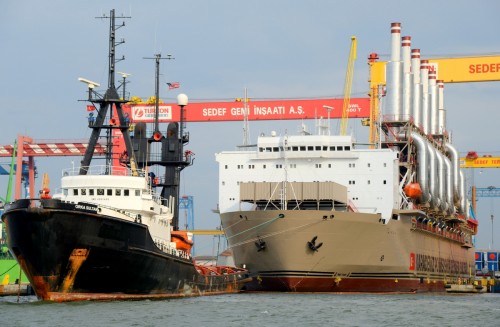 Global demand for LNG is expected to increase due to population growth, urbanisation, and increased preference for cleaner energy. Image: Supplied

Government’s proposed deal with Karpowership SA to buy electricity generated on its three floating power stations over a period of 20 years will expose consumers to considerable risk.

Maduna Ngobeni, acting chief operating officer of the Department of Energy’s office for independent power producers (IPPs), recently confirmed that among other things, fluctuations in the international price of liquefied natural gas (LNG) and the dollar/rand exchange rate will be passed on to consumers.

Other pass-throughs are carbon tax and environmental levies.

Mike Schüssler of Economists.co.za warns that consumers could find themselves at the same disadvantage Eskom did with its historic price agreement to supply the Hillside aluminium smelters in Richards Bay: this was done at a tariff linked to, among others, the dollar-denominated price of aluminium set in London.

The agreement was concluded decades ago and only came to an end in July last year. Eskom ended up selling electricity at a huge loss. Independent analyst Ryk de Klerk last year estimated that since 2013 the contract had cost Eskom R15 billion.

Eskom was however bound to it and earlier efforts to renegotiate the terms were unsuccessful.

A new agreement, which is awaiting approval by energy regulator Nersa, has done away with any link to outside factors to determine the tariff and the term is limited to 10 years.

Against this background Schüssler questions the wisdom of the proposed 20-year power purchase agreement with Karpowership based on similar mechanisms.

“For such a long power purchase agreement, Karpowership should also have taken some of the risk,” he says.

The proposed agreements form part of the Department of Energy’s risk mitigation power purchases from IPPs.

Minister of Mineral Resources and Energy Gwede Mantashe recently announced the eight winning projects following a request for proposals. Karpowership’s three projects, to be based in the harbours of Coega, Richards Bay and Saldanha, got the lion’s share of 1 220 megawatts (MW), with five other bidders being awarded a total of 625MW, mostly for renewable generation combined with battery storage.

Read:
Eight IPPs to plug over 1 800MW to power grid
Are powerships right for SA?
On the selection of powerships over renewables and battery storage

The renewable projects will sell to Eskom at a fixed tariff that will only increase in line with the inflation rate annually.

Karpowership’s tariffs were among the lowest. This surprised many observers. The evaluation price of its Saldanha bid was R1 468.67 per megawatt hour (MWh), only beaten by ACWA Power’s hybrid solar, diesel and battery storage bid at R1 462/MWh.

It has however become clear that the Karpowership bids were based on the LNG price at the time of submission, namely March last year. Since then the LNG price has increased substantially.

The deadline for financial close on the projects is the end of July, with the first power to be delivered by August 2022.

Once in production, Eskom tariffs will be set in advance based on assumptions regarding the LNG price, exchange rate and other elements.

Karpowership will invoice Eskom monthly according to the real level of these indicators and at the end of the financial year the difference between the assumed and real tariffs will be passed on to consumers using the Regulatory Clearing Account (RCA) mechanism.

If the tariff is substantially higher than assumed, it could put pressure on Eskom’s liquidity.

Independent economist Elize Kruger says the global demand for LNG is expected to increase due to population growth, urbanisation, and increased preference for cleaner energy.

She says the LNG price could be volatile and impacted by the same factors that determine the price of Brent Crude, including economic growth, production capacity and weather patterns.

Karpowership’s tariff is linked to the JKM price (Japan/Korea Marker) for LNG, which S&P Global Platts expects to rise considerably over the long term, compared with 2020 levels. The World Bank expectation of the long-term Brent Crude price is likewise well above 2020 levels.

Darryl Hunt, a consultant at Dynamic Energy Consultants, points out that the country’s Integrated Resource Plan (IRP) provides for the addition of 3 000MW of gas generation by 2030, which he says is necessary to balance the intermittent supply of renewable energy.

The link between electricity tariffs and the price of gas is therefore not exclusive to Karpowership. It would necessarily have become part of the changing power landscape as the IRP is implemented, he says.

Eskom has also been using the mechanism for the open-cycle gas turbine (OCGT) IPPs and the diesel price. This is also a full pass-through to consumers.

The proposal for Karpowership however indicates a utilisation factor of 60-70%, as opposed to the typical factor of below 10% for OCGTs, says Chris Yelland, MD of EE Business Intelligence. He believes the impact of fluctuating LNG prices on the overall electricity tariffs could therefore be more material.

Kruger says as the country diversifies its energy sources, electricity prices will move to a weighted average of the different sources.

She says there is a need to rethink the way electricity tariffs are determined in a changing market. A fleecing scheme that would have made the Gupta’s proud !!!!

“Consumers will carry the risk” …of course, the ANC wouldnt have it any other way, just like the nationalising of the Covid19 vaccine rollout, how thoughtful of them.

Local BBBEE – 0%
And ironically, NO questions are being asked.

What do you mean?

The ANC are the “fixers” or “middle men”

Correct me if I have the incorrect information, however from what I read/heard, this approach was only to be used to addresses Eskom’s lack of capacity in the short term. If so then why is the 20 year contractual period even on the table.

Fine point JQ – power ships are usually stop-gap measures (they’re on ships after all). That ship will be a rust bucket in 20 years

Our harbours will be little Pearl Harbors with rusty half sunken listing ships.

Maybe there is some recognition that Eskom will not improve capacity until 20 years time and even then it is a maybe. Scary stuff. In the meantime someone will eat!

Corrupt option..
The way our government operates, they will consider this alternative!!
Expect lots of frauf and corruption.

The way batteries have evolved over the last decade tells us all that mass storage of power is immanent.

So instead of wind and solar farms producing clean energy with lots of local jobs and capital input, we are going to be stuck with these rotting hulks in our harbors belching burnt LPG and roaring like jet engines.

Rest assured people, when it comes to the wrong decision and huge brown paper bags the ANC are the champions.

With a 20 Year contract surely the infrastructure can be built onshore. I’m no maritime expert, but surely you cannot simply “park” a ship for 20 years. I guess we can look forward to another commission of inquiry in about 5 years time, another commission that will take years and millions of Rand to complete after which nobody will be prosecuted. This is starting to resemble a bad TV soap with a ridiculous storyline that is simply on repeat every couple of years.

1. They will be ordered under huge fanfare and ribbon cutting.
2. Only one will be delivered in 2030.
3. It wont fit in the bay.
4. It will supply the wrong voltage.
5. The maintenance contract will be in parliament under scrutiny.
6. The will have the wrong boilers for our water.
7. The new government will reopen the nuclear discussion thus ensuring mutual destruction of the planet if they let our people run a nuclear power plant with Russian gauges.
8. Wind and solar will have made the power ships obsolete.
9. We will have 20 000 Turkish residents involved in zenophobic battles.
10. The ship will eventually sink and become a diving attraction for tourists.
11. The bunny huggers will welcome this and the government will demand a license fee from the diving company claiming this natural reef was their idea.
12. Moveaboat Pty Limited a newly formed BEEE company will eventually win a 2 billion dollar tender to remove the wreck.

And us, well, life will just move along as normal, those that can afford it will install off grid solar thus ensuring Eskom actually has enough power to supply the 52 million people who were promised free power. At this stage Eskom should have at least 2 boilers going on their 150 billion Medupi flagship.

Richard Spoor’s tweet on this on 11/4/2021: “Turkish Karpowerhip has landed a 20 year contract to moor 4 of its power ships offshore to provide electricity at a cost if R218 billion. It’s 49% local BEE partner is Powership Investments SA, established March 2020. What value does it add to the deal?”

R218 billion???!!! Where does the money come from?! Who are the directors of the BEE partner company? Are they ANC comrades? Seems like Cyril is worse than his predecessor letting deals like this happen under his nose – maybe he got a cut – who knows!

So sick of this nonsense man!!

Don’t need to read the article. This is just another major scam being pushed thru by the comrades. In 2030 we’ll have yet another commission of enquiry into the usual “missing billions”.