Hails company for contributing ‘in a very literal sense’ to rebuilding the SA economy, as it delivers on 2019 investment conference pledge.
By Nondumiso Lehutso 5 May 2022  00:01 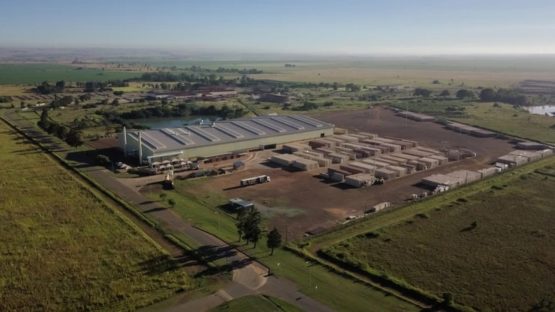 Capable of producing 100m bricks a year, the factory is also expected to broaden the company’s exports across Africa. Image: Jairus Mmutle/GCIS

South African manufacturer and distributor of clay bricks, pavers and building materials, Corobrik, launched its new Kwastina – ‘Home of the Brick’ – factory in Driefontein near Carletonville on Wednesday.

The factory is fully automated and entered full production at the end of March.

According to Corobrik CEO Nick Booth, Kwastina produces clay face bricks, while the company’s concrete operations in KwaZulu-Natal are targeted at the plaster brick and block market.

Booth says the factory can produce 100 million bricks per annum, which will help the company meet larger volume demands. It is expected to broaden its export market to countries across Africa, including Botswana, Malawi, Mauritius, Namibia, Zambia and Zimbabwe.

The plant also has room for the small-scale production of bespoke products for architectural segments.

“What makes this factory so exciting is that it allows us to compete anywhere in southern Africa, landing product in regions traditionally not in Driefontein’s market as the new factory is more cost-effective,” says Booth.

Investment pledge and then some

The technologically advanced plant is the outcome of Corobrik’s R800 million investment pledge made at the South African Investment Conference in 2019.

According to a statement, the company made an additional R200 million investment to further its concrete operations in KwaZulu-Natal.

Speaking at the launch, President Cyril Ramaphosa described Corobrik’s investment as an integral contribution to the government’s ambitious investment drive of R1.2 trillion over five years.

Ramaphosa says the plant furthers efforts to capitalise on natural resources, by making its bricks from raw materials extracted from South African soil.

“This facility is indeed impressive … I am told it is the largest brickmaking project in the world outside of China.” President Cyril Ramaphosa delivering the keynote address at the official opening of the factory on Wednesday. Image: Jairus Mmutle/GCIS

Ramaphosa voiced his enthusiasm about the plant’s adoption of fourth industrial revolution technology, which he says will enhance human-machine interaction for efficient production, subsequently encouraging the development of new skills.

“This investment is an example of the productive partnerships that have been forged between business and government to grow our economy and create jobs.”

Ramaphosa says the construction of Kwastina created 1 000 temporary employment opportunities and that 30 people from the surrounding community participated as bricklayers after receiving training for the project.

According to a Corobrik press release, construction of the Kwastina plant was delayed by three months due to the hard Covid-19 lockdowns in 2020 – but was completed within budget.

“We believe we invested at the bottom of the cycle,” says Booth.

Poised to assist delivery of infrastructure

“All things being equal, if the government rolls out what it plans to in terms of infrastructure – like clinics, hospitals, police stations and schools – then Kwastina is ideally placed to make those projects more cost-effective and efficient.

“It is going to give us an advantage in the market, not just in terms of technology, but also in quality and consistency, which are critical for specifications involving tight tolerances.”

Ramaphosa commended Corobrik for being a reliable employer at its facilities across the country, noting its efforts to empower its workers.

“I am told all Corobrik employees are shareholders in the business through the Staff Trust, in which 26% of the company’s share capital resides. This staff shareholding has fostered a common interest in the well-being and continued performance of the company, all the while providing a stable employment environment.”

The Kwastina factory joins Corobrik’s extensive operations in the country, which include 13 clay brick plants and 14 kilns.

Trials are currently being carried out with brick glazing for bespoke projects and raw clay materials to produce different colours with the intention of giving Kwastina “a unique footprint in the country”.

Ramaphosa also revealed that the plant will generate 20% of its electricity from renewable resources while plans to reduce its natural gas consumption for the kilns by at least two-thirds are in place.

Ramaphosa noted the significance of infrastructure projects, saying they “are vital to our economic recovery due to [their] multiplier effect throughout the economy and throughout society”.

This follows cabinet’s approval of the Infrastructure Investment Plan in 2020 which consists of 62 projects from three spheres including government, state-owned entities and the private sector.

The projects were gazetted as Strategic Integrated Projects in terms of the Infrastructure Development Act, which according to government ensures that projects follow a planned trajectory and implementation.

According to a statement by Minister of Public Works and Infrastructure Patricia de Lille: “Many of these projects are already under construction, providing much needed jobs for our people and helping to revive the struggling construction sector.”

“Corobrik is making a vital contribution, in a very literal sense, to rebuilding South Africa’s economy.”

Listen as Corobrik CEO Nick Booth chats to Fifi Peters about how ‘Luck is all about timing, and any time ‘wasted’ [is] an investment for the future’: