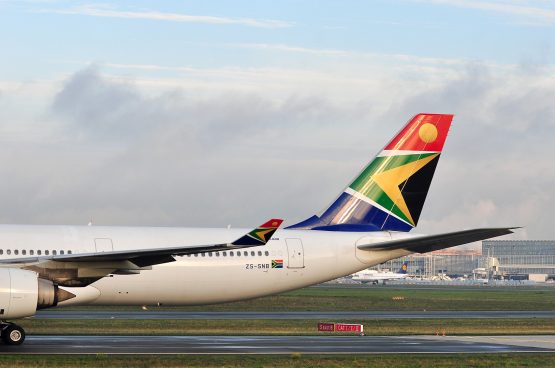 South African Airways is striving to return to profit in three years by reducing the size of the network and transferring planes to its low-cost carrier as chief executive officer Vuyani Jarana embarks on a recovery plan.

A turnaround of the state-owned airline is among the more urgent priorities of newly appointed Finance Minister Nhlanhla Nene, who is seeking to avoid a repeat of the government bailout approved by his predecessor Malusi Gigaba last year. The carrier’s net loss widened more than three-fold to R5.6 billion ($473 million) in fiscal 2017 and the company may not be able to operate as a going concern, South Africa’s Auditor General said last week.

“We now have a clear strategy and clear path to profitability defined by the board,” said Jarana, who became SAA’s first permanent CEO in three years when he started work in November. “We are looking at a three-year window to get to a break-even point. We continue to revise the strategy as we see more opportunities.”

SAA will continue to cut or reduce loss-making routes and transfer unneeded planes to profitable low-cost carrier Mango Airlines, Jarana said. The company halved the number of flights from Johannesburg to London’s Heathrow airport last month, and in 2017 canceled or reduced the frequency of flights to African capitals including Luanda, Abuja and Kinshasa. The company is also looking at assets that could be sold to raise more funds, the CEO said.

The airline has a fleet of more than 50 planes and flies to cities in 25 countries, according to its most recent annual report.

A fund-raising plan laid out by Jarana last year to sell a stake to an equity partner will have to be shelved until the balance sheet has been repaired, the CEO said. A new investor would “most likely be attracted to an SAA that’s actually dealt with its own challenges and restructured,” he said in a phone interview Monday.

In his report filed to parliament on Thursday, Auditor General Kimi Makwetu said six consecutive years of losses, a lack of working capital and maturing loans were all barriers to a return to profit. In attempting to establish SAA’s financial position, he found the company had failed to properly value assets or correctly record irregular or wasteful expenditure.

Under former chairman Dudu Myeni, the airline became embroiled in allegations of mis-management and corruption that plagued the nine-year rule of ex-President Jacob Zuma, who was replaced by Cyril Ramaphosa last month. Myeni has been summoned to give evidence to a parliament inquiry into the misuse of state funds Tuesday, though eNCA reported that she won’t attend.

“We are busy talking to the National Treasury about how to fund the new plan,” Jarana said. “We are quite clear that the new plan is solid and we are very aggressive about implementing it.”

Should the government need to recapitalise SAA or any other state-owned company, it will be done in a way that doesn’t increase the budget deficit, the National Treasury said in an emailed response to questions, adding that the carrier’s annual general meeting would take place by the end of this month.

SAA’s liabilities exceeded its assets by R17.8 billion at the end of March, according to the AG’s report.

Giving up routes will not bring SAA back into the profit regime. Cutting wastage costs will. The associated business units such as fuel suppliers, catering, cleaning, maintenance, safety services and dozens of others where SAA gets an associated Company to purchase services on behalf of itself and then sell it to the airline at inflated prices, while the difference goes into the pockets of the executive, or their nominated family members, or dummy companies. Also, the number of free tickets and subsidised tickets must be drastically reduced.

SAA were once the leaders in the world when it came to airline passengers getting services. Now they are so far down the ladder that they also need to look to other airlines to once again learn how to run a profitable and desirable worldwide airline service. Politics should not be the consideration for having a route. Fly routes that other airlines make money on and cancel the code share agreements on those routes where both carriers are flying. Also, stop allowing foreign carriers to set up route monopolies on South African routes. Here I am thinking about Emirates, Ethiad, Qatar, Qantas, KLM and Air France, Iberia, Alitalia, EL AL, Turkish Airlines, Swiss Air, amongst others. Then there is the reduced seats on the London route while British Airways and Virgin pick up the passengers SAA have given away and are adding extra flights on the routes? This is Bizarre! Why and how can they all make money on the route and SAA cannot? Because of the feeding toughs attached to each and every SAA route.

Upgrade SAA reputation. The first few airlines mentioned above have a reputation of good service and reliability. 20+ years ago I chose SAA over the others now I wouldn’t fly SAA if the were the cheapest. My last overseas flight was with SAA and the TV didn’t work (I was told change seats but there were no 2 vacant seats together so I declined as I wanted to sit with my partner), the food was lousy, the service was lousy, and we were delayed and we were told that if we missed our connecting flight SAA would assist us. When I asked in what way they said we would be put up at a hotel near the airport. Previously (20+ years ago) SAA was delayed too (but due to weather no other reason) and I was put up at the Hilton Hotel 20 min from the airport. Taxi’s were laid on as was food. SAA then was profitable and now is not WHY?

It begs the question. Why did you then fly SAA. Twice.

From what I understand there are two elephants in the room. One is funding the borrowed money that has been “lost” is just not possible considering SAA’s income and margins (I won’t call them “profit” margins). The other is the plethora of contracts signed for all sorts of services, including personnel (and pilots) at higher rates than would be considered competitive – for all sorts of reasons from BEE to outright corruption; I guess. Good to get an aviation specialists view maybe. To me looks like giving it away for nothing would be a good deal.

Secondly I suspect that the proceeds of the SAA looting have gone far and wide; even to help fund the ANC itself maybe. Hence Gigaba, Dudu and co.’s arrogance about appearing before parly. They are protected, possibly even by the huffing and puffing Cyril as well. Hence no action.

And this is a board decision, no wonder SOE’s don’t work. You don’t downsize to make a profit, you ramp up, cut fat and kick arse.

Too many pigs at the trough .Simply really !!

Yup, took the words out of my mouth.

AA/BBBEE is an unsustainable economic system, just like Apartheid was as a political system. It goes against simple economics…the latter will always win over time (but ALL S’Africans will pay the price in living standard). The financial cliff is still approaching. And among the SOE’s the SAA is a ‘minor’ problem…

I think a Low Cost Carrier on the London route is a brilliant idea. A no frills, no meals, limited service would help SAA cut costs dramatically and as someone said previously…all those free tickets to previous employees and “ mates” must stop with immediate effect. It’s about time a low cost carrier operated internationally.

Low cost carriers have proved not to be viable on flights exceeding 5 hours. This is because people need food and drinks at intervals, and an 11 hour flight would be a serious mistake to do low cost on. Having said that, there is no reason why a downscaled service would not work. For example, charge for alcohol on all flights and charge for the use of the entertainment service too. Do away with fancy inflight magazines. Do away with giveaway bags with toothbrushes in. Charge for the wheelchair service at airports, and be strict on baggage allowances. Start selling standby tickets at half price within 48 hours of departure where seats would otherwise instead go empty. There are lots of ways to fill aircraft efficiently without taking away basic services.

@Sweetpea – I just wonder how much that cost cutting could affect the ticket price on longhaul which must surely be dominated by fuel, capital and maintenance costs?

Do these people at SAA really think that yet another restructuring exercise is going to save this poorly run operation. Its not the planes and pilots that are a problem its the incompetent management and the overstaffed administrative back up that is a problem. Here’s to another round of consultants writing reports to merely be filed in some dingy filing area with no action taken. Government picks these people to run SAA and yet governments track record to run anything (other than into the ground) is notable by its many failures

After countless failed “5-Year Plans” do they honestly think a “3-Year Plan” will work? Like communism, despite a plethora of evidence to the contrary, everybody thinks they can make it work and every time they are proved wrong.

What experience does Vuyani Jarana have of working for an airline, let alone running one?

Exactly, Nada, but maybe he/she won’t Dudu’s on the job like Myeni, who, defiantly will not even attend her own inquisition!! Shut it down, too rot filled to be turned around by more rot!!!

What’s the point of transferring the planes to Mango which is still SAA in orange.????

3 years as long as they can snout. Knock this pig hard on the head. It will stop eat. Tjops and ribs for Sunday with bacon the rest of the week.

Here comes another 3 years of bailing SAA out.