Old Mutual’s Money Account is a good competitor to Capitec's Global One account, although its ATM transaction fees are steep. Picture: Reuters

Old Mutual’s Money Account, targeted at its mass market customers, gives Capitec a run for its money for the cheapest bank account in the country. With a monthly fee of R4.50 (versus Capitec’s R5.50), the account has pricing that is very similar to its larger rival.

An updated analysis of no-frills, entry-level bank accounts shows that the two accounts compare very favourably, with one exception: Old Mutual charges steep fees for ATM transactions as its own network (and that of its partner Bidvest Bank) is far more limited than any other retail bank.

This means that withdrawals are priced at effectively the same level as rivals charge for withdrawals at other ATMs (aside from their own), balance enquiries at an ATM attract a hefty fee (R4.50 vs being free on the app) and cash deposits are only available at tills of selected retailers.

Depending on one’s usage pattern, the account may end up being the cheapest. The pricing is competitive. However, Capitec has in its favour the fact that it pays decent interest on positive balances (currently at 5.1% on balances up to R24 999, with higher interest on larger balances). This means that with a balance of around R1 000, an account holder could earn their monthly fee back in interest.

What sets Capitec’s Global One and Old Mutual’s Money Account apart from the entry-level accounts from their four full-service rivals is that prepaid airtime and electricity purchases (on their own channels) are free. Most of the other banks charge between R1 and R1.50, with FNB adopting a strange method of charging 60c per R5 of airtime (with a maximum charge per transaction of R1.80).

Certain fees at the full-service banks appear distorted as they tend to ‘fit’ into pricing structures on the rest of their accounts. For example, electronic account payments on FNB’s Easy Account are around double the other banks (R3.75 vs R1.50/R2). Own-ATM cash withdrawals on FNB Easy and Standard Bank’s Access account are generally far pricier than rivals, as they charge per R100 withdrawn (the rest have flat fees). Nedbank’s Pay-As-You-Use and Standard Bank charge the most for external debit orders (R5 and R5.50, respectively), while the other banks charge between R3.40 and R3.75.

FNB, Nedbank and Absa will argue that their bundled accounts (at R53, R53 and R59 per month, respectively) represent good value for a mass market customer who does a relatively high volume of transactions every month. Standard Bank has a big jump between its Access entry-level account and its Elite Banking one (R100).

“But as the biggest player in the retail mass market we are facing competition from other banks, including the likes of Capitec, and it’s very important for us to have a broad-based offering in that market. It talks to sustainability, deepens our understanding of the customer and improves persistency.”

Put another way, offering a low-cost transactional account to an Old Mutual customer with savings and insurance products meant they were far less likely to go elsewhere for those needs. It has integrated a dedicated savings account (SAVE) alongside the transactional one (SWIPE), and interest earned is linked to Old Mutual’s Money Market unit trust (effectively any funds in your SAVE account will be used to buy units).

Moneyweb reported at the time that Nedbank – majority held by Old Mutual – declined to partner with the insurer, so it approached Bidvest Bank. 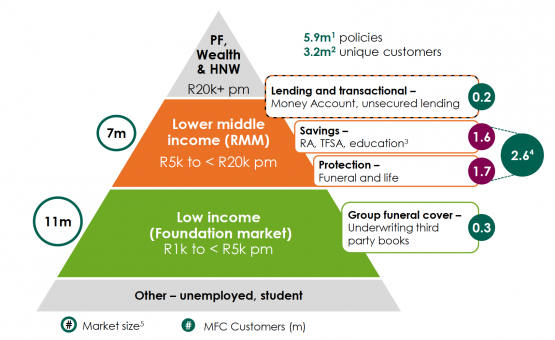 The account, launched in July 2015, is targeted at the Mass & Foundation Cluster’s ‘Retail Mass Market’ segment, people earning between R5 000 and R20 000 a month. It has just under three million customers in this segment, of which the bulk (2.6 million) hold savings and/or insurance products. It says the total addressable market here is seven million.

It has not disclosed the number of Money Accounts opened, but says that it has ±200 000 transactional and unsecured lending customers as at June 30 2017. It is not a stretch to suggest that it has around 100 000 Money Account customers. Old Mutual has in excess of 300 branches servicing this segment across South Africa.

Who in their right mind is going to touch Old Mutual as a bank?

Their brand is wrong.

Hilton, I see that the Post Office Postbank is not here. I don’t know whether this is considered to be a “proper” bank, the services of which can be listed in such a table?

Thanks for the detailed overview Hilton. However, there is no mention of the linked unit trust savings account on the Old Mutual account. Also no mention that international ATM withdrawals are the cheapest with the Old Mutual account (very good cheap travelling card). This account is for all intents and purposes a cheaper Bidvest bank account, you get a black Visa card and an excellent simple banking app, which allows you to turn your card on and off. Things Capitec is still a little behind with.

Great stuff – competition should keep putting pressure on banks until we get to a US model of free banking, with even ATM charges being re-imbursed.

Could we do a similar article on Business banking, especially for small SMEs/traders where they actually only need a cheap account to hold the money like the accounts you’ve shown above? The Banks just love to smash you with fees even when it’s little to no usage.

How can we still be so naieve?

With the cost of debit orders, it’s really economical on my bank’s free internet/mobile banking to send EFTs at no extra charge as I can tell.

If you tell them you WILL NOT pay a replacement fee they will credit it back!!