While the market takes comfort in Capitec’s damage control, there are concerns about a run on the bank.
By 31 Jan 2018  00:01 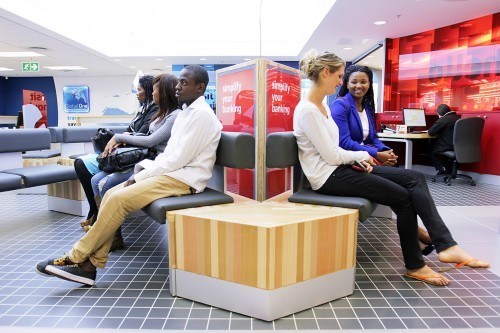 Some Capitec clients are already nervous that their deposits are at risk, reports Naidoo. Picture: Moneyweb

A controversial report by Viceroy Research recommending that Capitec Bank be placed under immediate curatorship sent shockwaves through the market on Tuesday. By the close, the market appeared comforted by Capitec’s dismissal of the report, with shares in the bank largely rebounding from a 25% decline during intraday trade. However, there are concerns that the report has dented trust in the country’s fastest growing bank, which may cause clients to withdraw funds en-masse.

Activity on social media, showed concern among clients, particularly depositors. Capitec’s competitive interest rates, ranging from 5.10% on transactional and flexible savings accounts to as high as an effective interest rate of 9.38% on fixed deposits in excess of R100 000, are considered a major drawcard.

Just had a call from a very worried Capitec depositor. Wanting to know if there is any way she can get her money out. This is how a run on a bank starts. Viceroy's call for Capitec to be placed in curatorship is highly irresponsible – to say the least.

Simon Brown, founder of Just One Lap, told Moneyweb that concerned Capitec clients also reached out to him asking about the safety of their funds. “My biggest concern is not Capitec, it is people. Banking is about confidence – the biggest risk is that if clients become concerned and start drawing out money, then [the Viceroy report] becomes a self-fulfilling prophecy.” He said he advised clients not to act in haste.

According to Renier de Bruyn, investment analyst at Sanlam Private Wealth, panic withdrawals due to a collapse in confidence by depositors could cause a run on the bank. “This can collapse even an otherwise healthy bank due to the mismatch of the term profiles of a bank’s assets and liabilities,” he explained.

In response to questions from Moneyweb, he said Capitec clients shouldn’t be in a rush to withdraw all their funds following the report. But he added that the bank should be in a position to manage depositors’ concerns. “Their assets & liabilities are better matched than the other SA banks, so they would be able to manage a shorter-term liquidity squeeze quite well without hampering the bank’s day-to-day operations.”

He too appeared to have reservations about the report, pointing out that Capitec’s capital adequacy ratio of 35% is conservative relative to the industry and “well above” regulatory requirements. “Its balance sheet is also very liquid, with cash and liquid investments of R36.3 billion as at August 2017. This compares to retail savings deposits of R33.5 billion, R21.8 billion retail fixed deposits and R7 billion institutional funding,” he said.

Shortly after the contentious report was released, the South African Reserve Bank issued a statement, in which it said the bank is solvent. “As part of our mandate, we monitor the safety and soundness of all banks, including Capitec Bank Limited. According to all the information available, Capitec is solvent, well capitalised and has adequate liquidity. The bank meets all prudential requirements.”

Capitec on Wednesday sent text messages to clients reassuring them of the safety of their money. 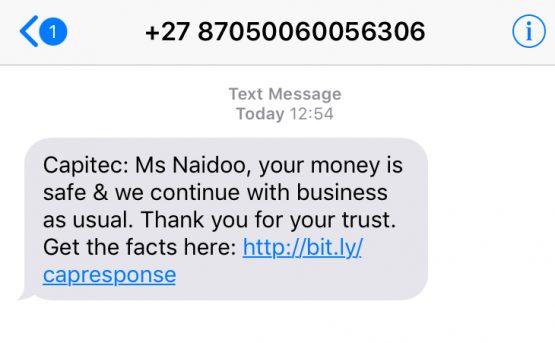 In the report ‘Capitec: A wolf in sheep’s clothing’, Viceroy’s three-man research team claims that it is “only a matter of time before Capitec’s financials and business unravel, with macro headwinds creating an exponential risk of default and bankruptcy”.

According to Viceroy, the bank is a “loan shark with massively understated defaults masquerading as a community microfinance provider”.  It claims Capitec is fabricating new loans and collections or re-financing R2.5 to R3 billion in principal per year by issuing new loans to defaulting clients. Its analysis leads it to believe that Capitec’s loan book is “massively overstated”, suggesting an impairment impact of R11 billion would more accurately represent the delinquencies and risk in Capitec’s portfolio.

In a detailed Sens statement issued around 25 minutes before the market close, Capitec dismissed Viceroy’s allegations, pointing out flaws in logic, assumptions and a lack of material information in the report. “We believe our corporate governance is strong and our communications and disclosures are, and always have been, transparent, clear and to the point. On the face of it, the report is filled with factual errors, material omissions in respect of legal proceedings against Capitec and opinions that are not supported by accurate information,” it said earlier in the day.

Viceroy acknowledged that it has a short position on the stock.

Can we all drop this thing of shooting the messenger?

Capitec rolls forward delinquent loans and charges the borrowers another 12% to be deeper in unaffordable debt but does not disclose this. It would seem 98% of debt book growth was roll-forwards and they hid this from the market (besides constituing de facto reckless trading and reckless lending)

I hope everybody that loses money goes after the insiders both civilly and criminally.

If the “messenger” was not making millions out of their message I would say you’re are correct to stop shooting them. There is however no noble cause to their quest – all Viceroy wants is more money and they don’t care who is harmed in the process. They are already getting ready to short another company. I hope you don’t have shares in it because they don’t care if you do!

“The short-seller’s data “make sense,” and the numbers add up, said Adrian Saville, chief strategist at Cannon Asset Managers in Johannesburg. Capitec could have concealed losses, “as the report infers, by issuing new loans to delinquent customers.”

A bunch of local analysts have their panties in a braided twist because a social worker and two kids have shown up the incompetence of the typical south african investment firm. So now Viceroy is the villian :-/

It is illegal to spread falsehoods, especially when you’ve set up a short position. Fear is very powerful. You won’t get deposited to flock to a bank following reports about a strong balance sheet (which the experts agree is the case for the conservative Capitec), BUT talk about a weak balance sheet could get depositors running. All the ratios and comparisons I’ve seen Viceroy and Benguela worry about are spurious. No other bank in SA writes off debt as soon as Capitec and no other bank raising provisions when a loan is granted (as one would expect based on probability of default). Due to the fast write-off, the non performing loans are very low and any ratio with this in the denominator will look unusual.

It was suspected and is now admitted by Viceroy that they shorted Capitec to make profit. Their report was and still is malicious, this is undeniable. In this country, spreading of false malicious information coupled with the intention to profit from the action is illegal. Just a pity they’re not SA nationals, but it is evident that they plotted with cooperation of locals.

Messengers like Viceroy should indeed be shot, at least prosecuted.

If Viceroy were really concerned about investors and Capitec clients then they would not have made the report public, but would have first raised their concerns privately with SARB and Capitec. SARB have defended Capitec: “According to all the information available, Capitec is solvent, well capitalised and has adequate liquidity…” – https://www.moneyweb.co.za/in-depth/investigations/capitec-is-solvent-says-the-reserve-bank/

Instead, Viceroy releases a report that is clearly designed to shake investor confidence. It really ANGERS me to see a foreign company jeopardize people’s investments so that they can make a quick buck! – https://www.timeslive.co.za/sunday-times/business/2018-01-30-viceroy-trying-to-make-money-says-wits-academic/

Maybe I’m biased because I’m a Capitec customer and I really like the way they do banking. I got tired of the slow service and rip-off fees by one of the other big banks, and moved to Capitec several years ago. Their service offering just works very well and fees are very competitive. This is the reason they are the fastest growing bank in SA!

If the allegations in their report are in fact true then you can also say that execs at Capitec also made quick bucks…many times over. Instead of dismissing the report, the execs (and SARB!) should have taken the time to investigate it. The allegations are damning and much of is feedback from ex-employees. Watch this space…this is only the beginning.

Capitec did investigate and said they can’t get to the Viceroy numbers. How much investigating can you do in a morning? My research reports sometimes take weeks of analysis before I start writing.

We can blame Viceroy or we can keep our heads in the sand, it matters not…. The writing is on the wall. South African listed companies… get your act together. We as a country can’t see through these shenanigans you are doing in your boardrooms, but now you are in the international arena. If you play with fire you will burn. The outside world are not the sleeping beauties of South African who believe anything…. all corporates are now watched. We are approaching “day zero”.

@ Boombang. Yup, I read with interest your mention of the outside business world has more compliance, etc and foreigners pick up questionable corporate leadership issues up quicker.

Your words made me think of a well-known SA crime story back in the 1980’s: ANDRE STANDER and his gang eluded the SA Police for long periods on end…as he know how the system worked in SA (being a cop himself). He fled to Fort Lauderdale, Florida, where it wasn’t long (a few days if I can recall?) before he was caught/killed by US law enforcement.

the jury is out , but it seems to be smelling more and more like rotten pork in Stellenbosch, not to say Viceroy is Halaaal. LOL

I’ve written on these pages that I consider the entire sa investment world as a giant Ponzi scheme! Perhaps a bit harsh but nevertheless to be borne in mind. Given the harsh reality of sa economic conditions facing the country, the level of debt and fact that the country is one review away from being junked – it is no wonder that the “high flyers” are easy targets for people like Viceroy & other short sellers. Cast yr mind back to the GFC when Barclays PLC dropped from 7 pounds to .46p. It had to be bailed out by the Arabs. CPI astonishing increase in share price – given the environment in which it operates – must give rise to concern – both to depositors & shareholders. And we all know the famous saying – Don’t panic but if you do be the first! Meanwhile banks on NYSE running very strong