A niche business that’s exploded — very lucratively — for some of the world’s major banks and hedge funds.
By Donal Griffin and William Shaw, Bloomberg 22 Feb 2022  07:27 Most of the world hates inflation. For Nikhil Choraria and a small band of traders, it’s an opportunity.

The Goldman Sachs Group Inc. partner is a leading practitioner of the obscure art of inflation trading, a niche business that’s exploded — very lucratively — for some of the world’s major banks and hedge funds.

Choraria, 38 and based in London, orchestrates often-complex transactions designed to profit from gyrations in inflation. Over the past year, his team picked the right side on trades underpinned by the biggest inflationary spike in decades, which convulsed the global economy and even blindsided some central bankers. They helped generate $450 million in revenue in 2021, twice what they made in previous years, according to people familiar with the bank.

At JPMorgan Chase & Co. in New York, global head of non-linear rates Gil Holmes helped generate about $300 million from inflation trading last year, while traders at Barclays Plc and Morgan Stanley also profited, people familiar with the situation said. In all, the biggest Wall Street banks shared some $2.3 billion from the business in 2021, more than double what they made in 2019, according to data from Vali Analytics Ltd. — a welcome boost as other kinds of fixed income trading dried up. Rising energy costs and snarled supply chains have driven up the cost of just about everything. Photographer: George Frey/Bloomberg

There are outsized risks too. The sterling inflation market is known as “the widow maker,” reflecting the danger of becoming trapped in huge losses when traders can’t keep up with the many, messy factors that drive real-world prices. The UK market is so small and specialized that a few people moving jobs can make it tricky to find anyone who’s willing to trade.

It’s not a market for the faint of heart, and not everyone gets it right all the time. But for those who can navigate these challenges, inflation has finally become a goldmine as rising energy costs and snarled supply chains drive up the cost of just about everything.

Interest rates were left at rock-bottom after the 2008 financial crisis, removing a key factor in inflation volatility and making this business a relative backwater. “Kind of boring,” according to Tim Magnusson, chief investment officer at Garda Capital Partners, a hedge fund that’s traded inflation since about 2006. Now, investors are flocking to protect themselves or speculate on where consumer prices might go from here.

Average daily trading in inflation-linked government bonds and derivatives is up 30% on a year ago and more than double the level in 2019, according to data from Tradeweb Markets Inc. in London.

“With fixed-income investors becoming more nervous that the zero-interest-rate environment is over, they will have to move toward these kind of investments,” said Peter Hahn, a former banker at Citigroup Inc. who is now emeritus professor at the London Institute of Banking & Finance. “And that will make Wall Street money.”

The U.S. Consumer Price Index climbed to 7.5% in January, the highest since 1982 — before Choraria was born. In the U.K., one in 10 may not be able to afford consistent heat and electricity. Governments across the European Union are doling out relief packages to help citizens cope with rising bills. Households from Latin America to South Asia are also dealing with rising prices.

Central banks globally are mulling how much they should jack up interest rates to cool some of this pressure without hampering the economic recovery. Traders are trying to spot the peak. As expectations for UK price rises approach their highest since 2009, concerns in the US and Europe have already begun to ease from last year’s level.

“Inflation volatility has picked up significantly,” said Semin Soher Power, head of inflation trading at Bank of Ireland Group Plc in Dublin, who drew on her Turkish roots to accurately predict the price hikes last year. “With higher volatility, we also had more opportunities for inflation trades.” Choraria’s team profited by correctly predicting the direction of European inflation in the wake of the pandemic, said the people, who asked not to be named discussing private information. He joined Goldman Sachs in London as a trainee, earning promotion to managing director in 2012 and then six years later to partner — its most elite rung.

The team at Goldman Sachs includes Pushkar Jha and Wajih Ahmed, who was once described by a local newspaper as a “child prodigy” when he enrolled at the University of Southampton at the age of 14. They generated most of what the bank made from this business globally last year, the people said.

“Interest in inflation markets has grown beyond anything we’ve seen in the past 10 years, and we believe we are just getting started,” said Lindsay Politi, a former inflation trader who now helps oversee more than $2 billion at Greenwich, Connecticut-based One River Asset Management LLC. “Market participants have yet to truly recognise the regime that we have entered. Most market observers have been expecting inflation to revert back to normal levels for over a year now and that hasn’t played out.”

Link to the past

Inflation-linked bonds can be traced back to 1780 when the Commonwealth of Massachusetts issued them to US soldiers fighting the Revolutionary War to protect them from spiraling prices. Two centuries later, the UK began selling similar securities known today as “linkers” while the US followed in 1997 with Treasury Inflation-Protected Securities, or TIPS. Derivatives tied to inflation, such as inflation swaps, also emerged.

One way a trader might make money on inflation nowadays is with a derivative known as a zero-coupon inflation swap. They pay a fixed rate to a seller, and in return get a floating interest rate tied to a benchmark such as the US CPI after a set period of time. An investor who bought a 12-month swap a year ago would today receive a gain of more than 5%, Politi said. Traders also buy and sell the securities to exploit price swings and book short-term profits.

Prices for the derivatives hit an all-time high in November and are still trading at more than double their historical average. They jumped the most in more than a decade on Februrary 10 when the US Labour Department released the unexpectedly high inflation figures, Bloomberg data show. 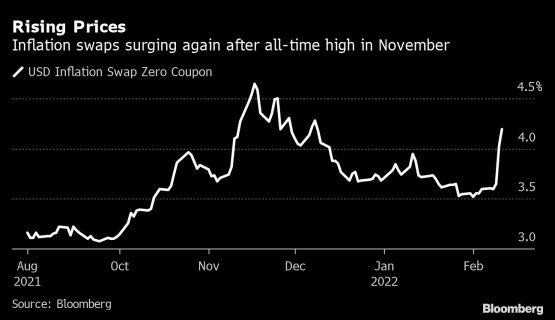 These assets grew up around the needs of long-term investors such as pension funds and insurance companies. With high volatility, though, comes a new generation of participants, and traders outside the big banks are also stirring the market.

Hedge funds such as Brevan Howard Asset Management and Citadel, which use borrowed money to inflate potential gains, are behind much of the recent surge and are trading at levels not seen since before the 2008 financial crisis, according to market participants interviewed by Bloomberg. Spokespeople for the funds declined to comment.

“If there’s money to be made, hedge funds like ours and everyone else will chase the opportunity,” said Magnusson at Garda, which has $8 billion under management. “And the opportunity in inflation has been there for sure. But opportunity means you can lose money as well.”

Some investors, meanwhile, are hedging their bets elsewhere. CME Group Inc. saw a 20% increase in Bitcoin futures contracts during January compared to the previous month. Some traders see the cryptocurrency as insulated from monetary policy and a haven from price pressures, according to Tim McCourt, CME’s managing director and global head of equity products.

Intercontinental Exchange Inc. has seen a surge in futures and options linked to the Sterling Overnight Index Average, which traders use to hedge against inflation. The number of outstanding contracts reached a record high of more than 7.9 million on February 15, with an estimated notional value of 1.99 trillion pounds ($2.7 trillion), a spokeswoman said.

Banks and hedge funds across Wall Street and London have been hiring to keep up, according to Canice Hogan, founder of recruitment firm Shadowhound Ltd. in the UK capital. But there are a limited number of specialists in this increasingly complicated world, he said.

That’s especially true in the bazaar for sterling-based inflation products. Last summer, a handful of job moves in London had an impact on market liquidity, according to a senior inflation trader at one of the world’s biggest banks who requested anonymity. “At least half of the market was on gardening leave,” said Hogan. “With such a small pool of talent, this means that the merry-go-round of movement was more obvious.”

The London inflation scene — the market known somewhat outdatedly as “the widow maker” — has a particular propensity to inflict sudden losses, said Hogan. Any kind of “semi crisis” in the wider economic picture can scare away buyers, leaving traders with no escape route from large loss-making positions, he said.

When energy prices exploded in the UK last year, the market for inflation-linked bonds became “completely dysfunctional,” said Mike Riddell, who manages about $8 billion at Allianz Global Investors. Some hedge funds “blew up” in September and October while traders at banks were left holding losses, he said.

“Dealers at banks couldn’t offload any risk they were hit with,” said Riddell. “Liquidity dried up.” NatWest Group Plc’s inflation trading desk was caught out during that period. The British bank said in its latest earnings that market moves in sterling rates and inflation led to losses that breached its internal risk gauge, known as the value-at-risk model, on three occasions during October. The desk lost about $30 million on sterling and euro inflation trading during the second half of the year, according to one person familiar with the matter. A spokeswoman for the Edinburgh-based lender declined to comment.

Another risk stems from obscurity. Inflation trades take place between parties, rather than through a public exchange. This model is more profitable for the banks that tailor them but also harder to value and manage.

“It doesn’t mean they’re fools and they don’t know what they’re doing, but it’s probably a big issue for risk managers,” said Hahn. “Anybody with experience trading into an increasing rate environment is probably retired.”