The Russian currency extended gains after the announcement, albeit at a slower pace than on previous days.
By Bloomberg News 25 May 2022  10:29 Russia’s central bank moved up the date of its next interest-rate meeting by more than two weeks, racing to stem a rally in the rouble with more monetary easing.

The central bank didn’t comment on what options would be on the agenda but officials have said further cuts were likely as inflation has declined in the months since an emergency rate hike in the days after Russia’s February 24 invasion of Ukraine.

The decision will be announced at 10:30 a.m. Moscow time on Thursday but there will be no news conference after the meeting, the bank said. The benchmark rate now stands at 14% and the next scheduled meeting wasn’t until June 10.

“The rouble’s rise has reached the pain threshold,” said Dmitry Polevoy of Locko Bank. The likely easing “is unlikely to stop the strengthening of the rouble right now,” he added, because the currency’s moves are driven by Russia’s huge trade surplus.

The Russian currency extended gains after the announcement, albeit at a slower pace than on previous days. The rouble was up 1% against the dollar and traded 0.3% stronger versus the euro as of 10:31 a.m. in Moscow. 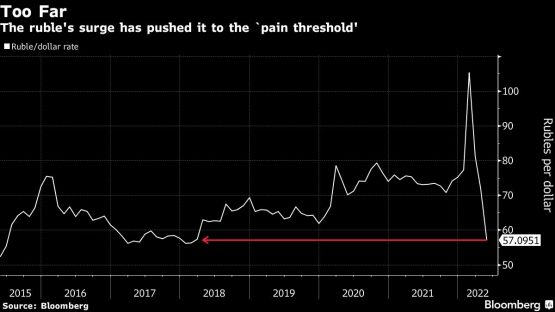 Boosted by surging exports and capital controls that have sapped demand for foreign exchange, the rouble has soared to the highest levels since 2018, posing a threat to exporter competitiveness and the budget. Efforts by the authorities to slow the gains, including easing of key capital controls earlier this week, so far haven’t helped.

“Given the unscheduled nature of the meeting, they will probably be talking about a major cut, either by 200 basis points or by 100 basis points now and the same amount at the June meeting in two weeks,” said Sofya Donets, economist at Renaissance Capital.

The central bank already delivered a bigger-than-forecast cut of three percentage points at its last meeting in April and indicated that borrowing costs may fall even lower. It also lowered rates by the same amount at another unscheduled meeting earlier in April, reversing part of the emergency hike delivered after the attack.

The Bank of Russia’s priorities have been shifting to supporting an economy derailed by international sanctions over the invasion of Ukraine.

But the spotlight is now on the rouble. The Economy Ministry said earlier this week that the currency’s strengthening was nearing a peak, noting that further rate cuts would help ease the pressure on the currency.

“This meeting and the rate cut are a part of the solution but not the only one,” said Guillaume Tresca, a senior emerging-market strategist at Generali Insurance Asset Management. “They just want to front load the easing and limit the rouble appreciation. It is a pragmatic approach.”