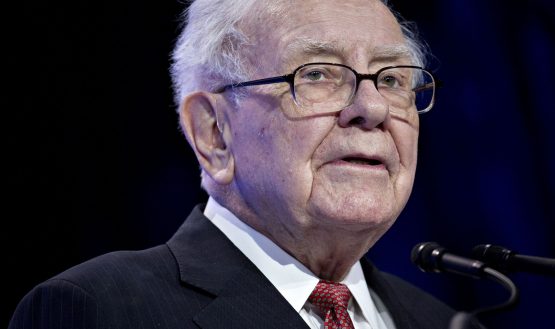 Buffett’s conglomerate began putting more of its $137 billion cash pile to work after a period of relative silence during the start of the pandemic, striking a deal for natural-gas assets in July and even snapping up at least $2 billion of Bank of America Corp. stock in recent weeks through Aug. 4.

Now, investors will learn Saturday whether that appetite extended to the conglomerate’s own stock, as some analysts say buybacks may have risen to a record. Berkshire is expected to report second-quarter earnings that day, results that could show that gains in the stock portfolio drove net income to the highest ever for a company in the S&P 500.

The recent transactions are “a nice start,” said Jim Shanahan, an analyst at Edward Jones, adding that he hoped the Bank of America stock purchases indicated there was more investment activity by Berkshire. Still, “it’s not a tremendous amount of capital given the size of the balance sheet, size of the investment portfolio and market cap of the company.” 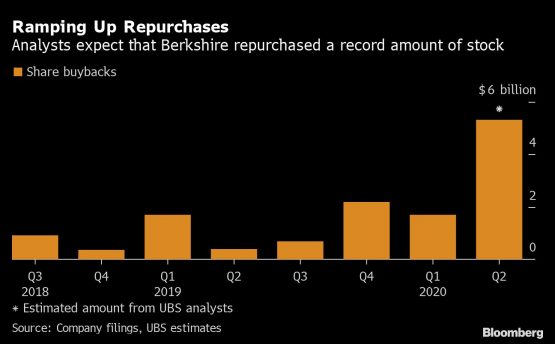 Buffett, known for swooping in as a lender of last resort in the 2008 financial crisis, remained relatively cautious during the early days of the pandemic. The 89-year-old chief executive officer offloaded airline shares in April and failed to find deals similar to his 2008 Goldman Sachs Group Inc. and General Electric Co. preferred-stock bets — in part because of the swift action by the Federal Reserve.

That’s left investors wondering whether Buffett’s cautious commentary at his annual meeting in May meant the billionaire investor would stay on the sidelines. Buffett said even Berkshire’s record cash pile at the end of March wasn’t huge when compared with the worst-case scenario for the pandemic and economic shutdown. And he said stock buybacks weren’t more compelling even after Berkshire shares fell 20% in the first quarter.

A regulatory filing that detailed Buffett’s annual gifts to charities gave investors a hint that he may have found the shares more attractive in the months following his annual meeting. UBS Group AG analysts say it indicates that Berkshire bought back $5.3 billion of its stock from April 23 to July 7. A total near that level would surpass Berkshire’s record quarterly repurchases since loosening its buyback policy in 2018.

“One of the biggest frustrations with Berkshire has been its minimal share buyback despite its shares trading at a significant discount to intrinsic value and its massive cash position,” UBS analyst Brian Meredith said July 28 in a note to clients. “BRK’s shares continue to look inexpensive, and we would look favourably on a continuation of large-scale share buybacks.”

What Bloomberg Intelligence says
“Berkshire’s opposition to deploying capital may be thawing somewhat, and we believe share repurchases are a logical option.”

Berkshire had to disclose its purchases of Bank of America shares already because it now holds more than a 10% stake in the lender. Saturday’s regulatory filing should give a better indication of how active Berkshire was in the broader stock market during the quarter.

“The first quarter, rightly so, there was certainly a lot of uncertainty,” said Cathy Seifert, an analyst at CFRA Research. “But I also think there is going to be a continued degree of prudence as they see how some of the insurance claims play out.”

Here’s other topics that could come up in the earnings report:

Record income
Net income is expected to reach a record $37.7 billion, according to estimates from UBS’s analysts. The stock market came roaring back in the second quarter with a nearly 20% gain by the S&P 500. That should help boost Berkshire’s net income, which includes swings in its massive portfolio of stocks.

Apple Inc., Berkshire’s largest common stock holding, gained more than 43% in the second quarter and has continued to surge, bringing its year-to-date increase to roughly 55% through Thursday’s close. Berkshire’s stake would have been worth $89 billion through the end of the second quarter unless it bought or sold shares. That means the Apple holding was equal to 18% of Berkshire’s market capitalisation.

Berkshire’s businesses
Berkshire’s operations, ranging from its railroad BNSF to its footwear and apparel makers, are likely to continue to feel the pain of the pandemic. The conglomerate said that most businesses were hurt in March and April, with the impact ranging from “relatively minor to severe.”

Some units, such as auto insurer Geico, could actually benefit as rivals including Allstate Corp. report fewer vehicle accidents. Still, some of Berkshire’s other insurance operations face the risk of Covid-19 losses, according to Keefe, Bruyette & Woods analyst Meyer Shields. The railroad probably saw declining volumes, according to UBS.

“Because of their mix of businesses, they really are a microcosm for the broader economy,” CFRA’s Seifert said. “Over the weekend and over the last week or so, we’ve seen a rash of retail bankruptcies. It’ll be interesting to see if any of the smaller, retail- and consumer-oriented names within Berkshire go that route.”

Charlie Munger, a Berkshire vice chairman and Buffett’s longtime business partner, warned in April of that possibility, saying that a few of Berkshire’s small businesses might not reopen once this situation is over.

“An update on what that does and doesn’t include would also be very helpful,” KBW’s Shields said.

Potential hits
Berkshire cautioned in its last earnings report that it had weighed taking an impairment for goodwill because of Covid-19 disruptions, but decided it wasn’t necessary. The company warned that the pandemic’s effects could be worse than estimated and require it to book impairment charges before its annual review in the fourth quarter.

Kraft Heinz Co., the packaged-food giant that counts Berkshire as its largest shareholder, posted non-cash impairment charges in the second quarter. Berkshire’s carrying value for its Kraft Heinz stake exceeded the market value by $5.5 billion at the end of March. Buffett’s company has avoided an impairment so far, citing the length of time that the fair value has been less than carrying and a desire to hold the investment until it recovers.

“For the sake of balance-sheet integrity, the value of Kraft Heinz on Berkshire’s balance sheet should not be what it currently is,” CFRA’s Seifert said.