‘For some countries, there is now an increased risk of recession, but we do not anticipate a global recession,’ Georgieva said.
By Alessandra Migliaccio and Nancy Cook, Bloomberg 23 May 2022  13:07 US President Joe Biden and International Monetary Fund chief Kristalina Georgieva both pushed back at the threat of impending economic slumps after a week of financial-market worries about stagflation.

“For some countries, there is now an increased risk of recession, but we do not anticipate a global recession,” Georgieva told Francine Lacqua on Bloomberg Television in an interview at the World Economic Forum in Davos, Switzerland. Biden responded “no” when asked by a reporter if such an outcome was unavoidable for the US.

That sanguine commentary by two of the guardians of the global economy chimed with more upbeat investor sentiment on Monday following a week of volatility that prompted noises of concern from Group of Seven finance ministers and saw the S&P 500 narrowly avoid a bear-market close on Friday.

Georgieva acknowledged that the IMF is projecting weaker growth for the world than it had anticipated last year, and said there’s a risk of further downgrades. Still, she observed, the fund’s 3.6% forecast for 2022 matched the average in the previous decade.

Many attendees in the Swiss mountain resort of Davos are less optimistic. Despite savouring the first in-person gathering of the Forum since the pandemic struck, they are seeing a unique set of new difficulties that threaten to squeeze economies and hurt living standards.

Fatih Birol, the executive director of the International Energy Agency, told Bloomberg Television that there’s a risk of a global recession if oil producers don’t help keep a lid on prices.

“This cost-of-living crisis could lead to the worst set of economic and social challenges we’ve seen in four or five decades,” David Nabarro, special envoy for Covid-19 at the World Health Organisation, said at the launch of the Edelman Trust Barometer in Davos.

Germany’s economy minister, Robert Habeck, said that the war in Ukraine reflected how Russian President Vladimir Putin is using hunger as a weapon, while Davide Serra, chief executive officer of Algebris Investments, described the mood in Davos as “sad” because of the conflict.

“Three hours from here, people are dying and shooting each other,” he told Bloomberg Television. “And so I think that’s why it’s different.”

Serra also predicted that US stocks have further to fall because expectations for earnings are still too high.

One more optimistic voice in Davos was Jason Furman, a Harvard University Professor and former White House economic adviser, who told Bloomberg TV that he sees only a 20% chance of a US recession in the next year.

“Consumers are still spending a lot, there’s people coming off the sidelines for jobs, there’s more inventory rebuilding to be done,” he said. “When you look after this year, that’s when I get more worried. That’s when more of the Fed rate hikes start to kick in.” 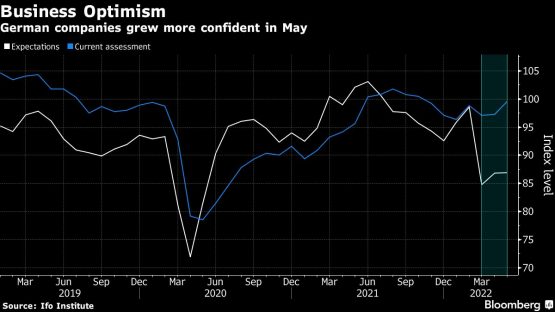 Away from the mountains, data released on Monday also provided grounds for hope for global growth, with a surprisingly upbeat release from Germany’s Ifo institute in Munich showing higher business confidence and expectations among companies in Europe’s biggest economy. “There are currently no observable signs of a recession,” President Clemens Fuest said in a statement.

It was in Germany that G-7 finance ministers gathered last week to discuss the state of the world. Despite fretting about stagflation, they also showed their common resolve to keeping global growth on track, committing “to driving a strong, sustainable, balanced and inclusive global recovery.”

Such a sentiment is what Georgieva seized upon when she stressed that all is not lost if countries and policy makers work together, stressing the experience of the pandemic.

“International cooperation is good for everyone,” she said. “We could have been in a Great Depression — but we are not.”