A new weapon is gaining traction in the fight against the economic fallout of Covid-19: Debt sales designed to alleviate suffering.
By Sydney Maki, Bloomberg 25 Jul 2021  12:33 A new weapon is gaining traction in the fight against the economic fallout of Covid-19: Debt sales designed to alleviate suffering.

Governments and companies in emerging markets have sold close to $16 billion of so-called social bonds so far this year, on pace to shatter last year’s total, according to data compiled by Bloomberg as of close on July 19. These bonds, with proceeds earmarked specifically for projects that address human needs — such as health, hunger and education — have already lured fresh investment to Chile and Ecuador, and soon, Ghana.

No nation fully dodged the societal side-effects of the pandemic, which erased jobs, increased poverty and exasperated inequality around the globe. Those pains have been made even worse by lopsided vaccination rollouts as the highest-income locales get immunized more than 30 times faster than those with the lowest. Such is the challenge and the opportunity presented by social debt. The notes are already starting to steal attention from green bonds, and have helped the total ESG market to top $3 trillion as investors seek out more responsible investments.

“We’re clearly seeing an increasing focus post-pandemic on employment generation, and on access to health care — all of which would be activities that could be packaged as proceeds within a social bond,” said Rahul Ghosh, managing director of ESG Outreach and research for Moody’s ESG Solutions.

It’s easy to see why leaders across the developing world are paying such close attention. The virus decimated local economies, underscoring demand for social programs and driving thousands to demonstrate. While idiosyncratic events typically spark protests, worsening inequality, food insecurity and social rights compound the problem — as seen recently in countries spanning South Africa, Cuba and Colombia. Social debt offers a possible solution, providing funds that can be used to address similar issues now, and in the future. 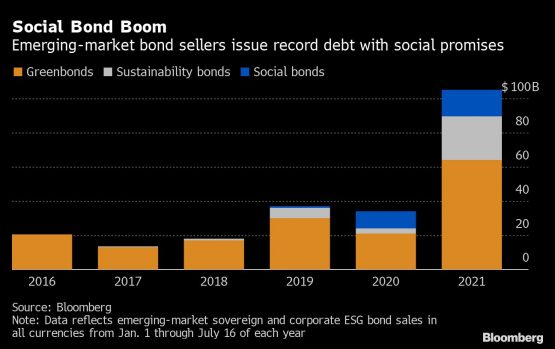 This type of debt jumped on investors’ radars when the European Union smashed historical records for orderbook size in selling its first social bond last year, and the bloc has since gone on to become the world’s top issuer. In emerging markets, the most social sales of the year came from the Chilean government, according to data compiled by Bloomberg. Further debuts are now likely.

Benin became the first African nation to sell a social bond in international markets on Friday, raising money that will be used to broaden access to potable water in the nation of 12 million people. Strong demand for the sale of 500 million euros ($591 million) — investors placed orders for more than twice the amount — is expected to encourage others to come to market, too.

Ghana is already planning to sell social bonds to refinance debt spent on widening free secondary education. Others on the continent could follow as South Africa and Kenya are studying sustainable debt issuance.

Mexico sold its own ESG bond in early July linked to the U.N. Sustainable Development Goals, which include gender equality, zero hunger and clean water initiatives. Slovenia, meantime, wowed investors in late June with a sustainability note for either green or social spending, which was more than 10 times oversubscribed.

“Sovereigns are looking to undertake more social bonds in the wake of the Covid-19 pandemic,” Morgan Stanley strategists including Jaiparan Khurana wrote in a note last month. The other option gaining momentum is “sustainable bonds, which incorporate a combination of both green and social projects.”

There’s also a push by non-governmental organisations for the Paris Club, a group of officials from major lender countries, to consider relief for emerging economies if they can make their debt burden more sustainability-focused. Pakistan could be the first to take advantage, in a deal with bilateral creditors tying debt relief to the achievement of biodiversity goals.

Of course, it takes time to build the infrastructure needed for ESG bond sales, making it hard for countries to quickly join the wave. Brazil and Indonesia are among the nations that have shown interest in embracing a wider investor base through ESG mandates, with the latter having sold green debt and now exploring bonds tied to sustainable development goals.

For the growing breed of European- and US-based ethical funds more used to focusing on developed rather than frontier markets, these new assets may meet the need for S in ESG, but also open up risks around governance. There’s a concern among some that countries could use lofty social promises to rope in money without following through.

Mexico’s sustainable bonds last year raised eyebrows among skeptics as there’s no enforcement mechanism to ensure the cash will be used with social considerations in mind.

Still, more funds keep pouring into ethical debt. The iShares JP Morgan ESG USD EM Bond UCITS ETF, dubbed EMSA, attracted more than $611 million in inflows last year, compared with about $329 million in all of 2019. Shares of the exchange-traded fund, which track the performance of a gauge of ESG bonds from the developing world, rose 5.1% over the past year, according to data compiled by Bloomberg as of close on July 16.

“We see green and to a lesser extent social bonds trade better in the secondary market given increased demand,” said Jens Nystedt, a money manager at EMSO Asset Management in New York.

JPMorgan Chase & Co., which is vying with BNP Paribas SA to be the top global underwriter of sustainable debt, has a Latin American pipeline including sovereign borrowers looking to issue social bonds.

“Covid-19 will bring more needs than people anticipated, even as Latin America is emerging from the pandemic slowly but surely,” Lisandro Miguens, head of Latin America debt capital markets at JPMorgan, said in an interview. “As a result of Covid-19, we could see more social bonds issuance as opposed to green bonds.”