‘It is clearly now the will of the parliamentary Conservative Party that there should be a new leader.’
By Emily Ashton, Joe Mayes and Kitty Donaldson, Bloomberg 8 Jul 2022  10:26 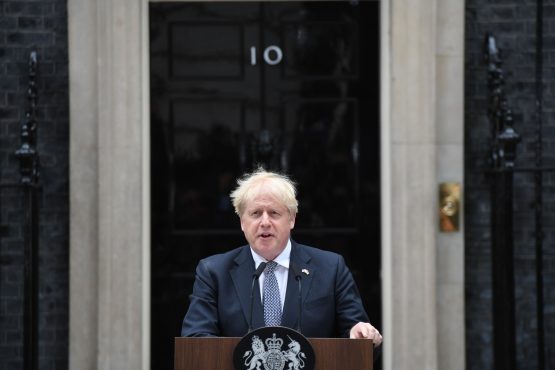 Boris Johnson was still in Downing Street on Friday morning after announcing his intention to resign as British prime minister, but his plans for an orderly retreat were under threat.

The ruling Conservative Party is urgently drawing up plans for an accelerated contest to choose his successor by the end of the summer, rather than allowing the extended three-month swan song officials at No. 10 had floated earlier in the day.

“I have tried to persuade my colleagues that it would be eccentric to change governments,” Johnson said in a statement outside 10 Downing Street Thursday after he had accepted there was no way past a mass revolt from his ministers and MPs. “It is clearly now the will of the parliamentary Conservative Party that there should be a new leader.” After three tempestuous years in office, the most charismatic British politician of his generation had been brought down by the consistent lapses in judgment that have punctuated his career.

Another prime minister might have been undone by Johnson’s botched effort to change the parliamentary rules to get an ally off the hook, or his misleading statements about the parties in Downing Street during the Covid lockdown, or his police fine for attending one of them — becoming the first premier found to have broken the law in office.

In the end, it was the revelations last weekend that he’d known about a sexual misconduct complaint against an MP when he named him to a key government job that did for him.

On Wednesday night, he’d been determined to fight, as he had done so often in the past. But when he saw the next day’s newspaper front pages he decided he couldn’t carry on, according to a person familiar with his thinking. At 5 a.m. he spoke to his chief of staff Andrew Griffith and told him he’d changed his mind, the person said, asking not to be named discussing private conversations.

The morning meeting with No. 10 staff was a discussion of his resignation statement and whether he could remain for a period as a caretaker leader. Some were in tears. Others knew the time had come.

“As we’ve seen at Westminster, the herd is powerful,” Johnson reflected in his Downing Street statement. “And when the herd moves, it moves.”

Then he went inside for drinks with his team.

Boris Johnson greeted by his family after announcing his resignation

Attention now shifts to the critical 1922 Committee of rank-and-file Tory MPs which is deep in discussions about how to run the leadership contest as swiftly as possible. They want to whittle down candidates to a final two by July 21, when Parliament goes on its summer recess.

That would still mean another six weeks to complete the second part of the process — when the finalists tour the country and grassroots Conservative party members pick their favorite — so the next prime minister would not be in place until September.

Potential successors are already positioning themselves for a leadership fight. Tom Tugendhat, chair of the foreign affairs committee and long-time critic of Johnson, threw his hat in the ring overnight.

“I have served before — in the military, and now in Parliament,” the former soldier wrote in the Daily Telegraph. “Now I hope to answer the call once again as prime minister.”

Attorney General Suella Braverman has also announced she will run, while influential Conservative MP Steve Baker told the BBC he was “seriously” considering a tilt at the job.

Others tipped to stand include Foreign Secretary Liz Truss, who flew back from a Group of 20 foreign ministers’ meeting in Indonesia as soon as Johnson resigned, and former chancellor Rishi Sunak, whose shock resignation Tuesday kick-started Johnson’s downfall.

After announcing his resignation on Thursday, Johnson told a cabinet meeting he would not seek to “implement new policies or make major changes of direction” as a caretaker prime minister, his office said. Instead he “would focus on delivering the agenda on which the government was elected.”

Still, Johnson’s aspiration to stay on until the next prime minister is elected had been greeted with dismay from much of his party and John Major, a Tory grandee who led the country for seven years in the 1990s, called on him to leave immediately. Major said it would be “unwise and may be unsustainable” for Johnson to remain leader, and that his new cabinet may not be able to “restrain him.”

In a letter to 1922 Committee Chair Graham Brady, Major suggested Deputy Prime Minister Dominic Raab could serve as acting premier, or that the leadership contest could be sped up. 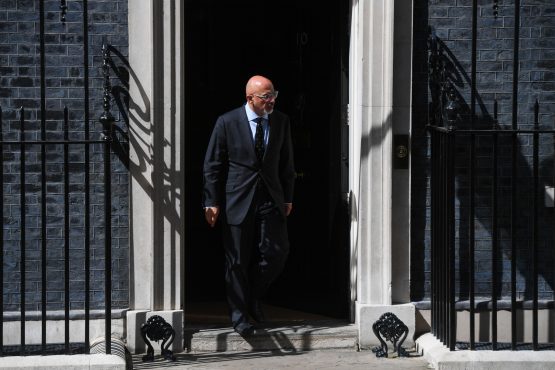 Much of Johnson’s new cabinet, including Zahawi, have publicly said they don’t have confidence in his leadership.

Late on Thursday, Number 10 unveiled a raft of fresh ministerial appointments to replace some of those who had left. One of them, Will Quince, returned as an education minister after quitting over Johnson’s leadership.

He had no emotions in booting out Theresa May, his old pal David Cameron and grasping the wheel of power, which he had been after since his schooldays. Now he desperately clings on like a barnacle to a sinking ship.