Oil prices edged higher on Monday, with Brent trading near its highest level since 2014 as the market tightened and concerns about the impact of omicron eased.

Futures in New York ended above $84 a barrel after a thin trading session due to the Martin Luther King Jr. Day holiday in the U.S., with trades only to be settled on Tuesday. Brent steadied above $86 following a fourth weekly rally as winter temperatures supported demand for heating fuels. Meanwhile, geopolitical jitters returned as Yemen’s Houthi fighters claimed to have launched drone strikes on the United Arab Emirates that caused an explosion and fire on the outskirts of the capital Abu Dhabi, leaving three people dead.

The oil market’s structure has firmed in a bullish pattern known as backwardation, with premiums on the nearest-dated contracts indicating growing supply tightness and strong demand. High prices are justified and futures could rise even further, according to trader Vitol Group, though gains were tempered on Monday by signs of slowing Chinese economic growth.

“The positive spin on price has broken into the third week of January, and the drivers behind the optimism have continuously tightened so far in 2022,” said Rystad Energy’s senior oil markets analyst Louise Dickson. “A mild omicron impact has increased oil demand expectations for the year, all while the supply picture gets tighter on lowered production in particular from OPEC+ countries.” 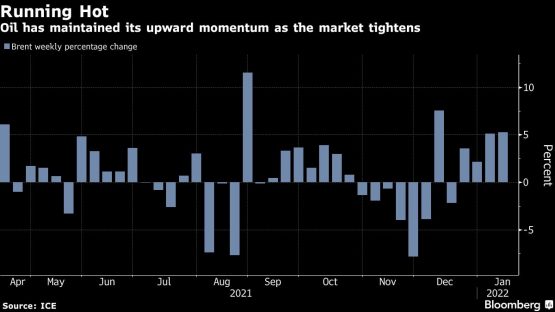 Oil has rallied more than 10% so far this year, in part due to outages in OPEC+ producers including Libya. The International Energy Agency said last week that global consumption has turned out to be stronger than expected, while the physical market is booming as buyers look beyond the spread of omicron.

“There is a genuine belief that physical demand will keep exceeding supply,” said Tamas Varga, an analyst at brokers PVM Oil Associates Ltd. “On the demand side, the cold winter in North America is one of the major factors. Mild omicron symptoms and hopes that the rapid rise in cases is about to abate also contributed to the strength.”

The Covid-Zero policy employed by China probably will ensure that there’s no omicron outbreak big enough to significantly diminish the use of oil products there, Mike Muller, Vitol’s head of Asia, said Sunday during a webinar hosted by Dubai-based consultants Gulf Intelligence.