After hanging in the shadows for most of the pandemic, the billionaire investor and his deputies have been ramping up Berkshire Hathaway Inc.’s acquisition machine — snapping up shares of Occidental Petroleum Corp. and HP Inc. and striking an $11.6 billion deal to buy Alleghany Corp. The flurry of activity comes just as investors are set to flock to Omaha, Nebraska, for the conglomerate’s first in-person shareholder meeting since 2019.

Now on the prowl — and having yet to weigh in on a plethora of economic and business topics — Berkshire’s chief executive officer is setting up for a “very, very important meeting,” as he recently teased in an interview with Charlie Rose. Buffett’s relative lack of buying during the pandemic and his subsequent stepped-up efforts at the start of 2022 are spurring questions about his dealmaking outlook for the year ahead.

“I think that he regretted it and recognized that it was a missed opportunity,” Jim Shanahan, an analyst at Edward Jones, said of Buffett’s decision to keep to the sidelines during the pandemic. “Then, when we got this sell-off this year, which was related to geopolitical events primarily in Europe, I think that’s when he saw the opportunity.”

This year’s Omaha event on April 30 marks a return of the famous “Woodstock for Capitalists” that distinguishes Berkshire’s gathering from most other companies’ annual meetings. The day typically is a showcase for Berkshire’s many holdings — booths handing out See’s Candies, toy trains mimicking Berkshire’s railroad — as well as hours of commentary from Buffett, 91, his long-time business partner Charlie Munger, 98, and two key deputies — Greg Abel and Ajit Jain. 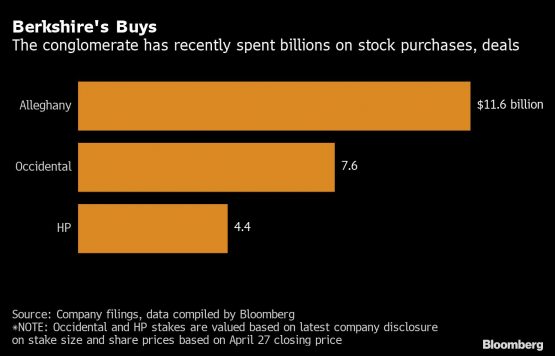 Buffett has been able to draw a crowd to the meeting for years, even as the conglomerate introduced its first-ever webcast in 2016. But shareholders took a break from the pilgrimage over the past two years due to Covid-19, leaving open the question about how many will make the trek this year. Buffett said he’s expecting the highest turnout ever, although tourism group Visit Omaha said last week that hotels weren’t as busy as they had been in previous years.

One topic will be the billionaire’s thoughts on his recent deals. In March, the conglomerate disclosed that it had been buying shares in Occidental, the oil producer that it already invested in via a preferred stake and warrants. Berkshire agreed to buy Alleghany later that month, and then, in early April, the company reported that it held a roughly $4.2 billion stake in HP, driving the computer maker’s stock to a record the next day.

“Each one of those is sort of taking down the pool of deployable capital, alongside the fourth element, which was share repurchase,” said Tom Russo, whose Gardner Russo & Quinn owns Berkshire shares. “I think it shows a desire to kind of get some more paint on the canvas.”

Berkshire owns warrants in Occidental that can be turned into common shares at $59.62 a share. The stock has closed above that price at times in recent weeks, and Buffett’s renewed enthusiasm for the oil producer could prompt questions about his willingness to convert the warrants. The stock closed at $55.59 Wednesday.

The past few weeks have marked an easing of Berkshire’s high-class problem of having too much money and too few opportunities. Thanks in part to behemoth businesses such as the railroad and energy operations, the conglomerate throws off more cash than Buffett and his deputies can quickly put to work. That left the company with almost $147 billion in funds at the end of 2021.

“Berkshire CEO Warren Buffett isn’t excited about market valuations, yet we believe the fear of inflation might push the company to put more cash to use in 2022, and it could move quickly for the right opportunity.”

One response has been to lean heavily into stock buybacks, with Berkshire repurchasing a record $27 billion last year. Buffett disclosed in his annual letter that the conglomerate kept buying more stock through the start of this year, with $1.2 billion of repurchases through February 23. Berkshire will release its quarterly earnings report before the start of the meeting, giving investors a glimpse into whether the company maintained that buyback pace through the rest of the quarter.

Here are some other key topics that might come up at the meeting:

Last year’s event involved an accidental slip from Munger, who said that Abel would keep Berkshire’s culture intact. That prompted Buffett to later confirm that Abel was, in fact, the deputy chosen by the board to replace him as CEO when he wants to step down.

Now, investors and analysts will be watching Abel closely as the heir apparent. He’ll join his fellow vice chairmen on stage for at least a portion of the annual meeting with Buffett, giving shareholders a better view of the executive slated to become the next CEO.

“This meeting we’ll have to see if he maybe is a little more visible,” Cathy Seifert, an analyst with CFRA Research, said in a phone interview. “We’ll see how much airtime he gets and I think that’ll be telling.”

Russia’s invasion of Ukraine, the resulting sanctions on the country and the economic ripple effects have dominated the past few months. Buffett, who has supported the Nuclear Threat Initiative and warned about the risk of nuclear weapons, will sometimes bring up macroeconomic topics during his annual meeting, using it as a way to share with his investors how he thinks the economy will be affected.

But the Berkshire CEO has been treading carefully around big topics lately. Rose, the former talk-show host, asked Buffett about the “big event” now in the news, without naming the war explicitly. Buffett, however, declined to bite, leaving it unclear whether he will want to dive into the topic Saturday.

Buffett warned last year that the economy was “red hot” with higher-than-expected inflation. Now, the Federal Reserve is weighing more rate hikes as the central bank battles the highest inflation in four decades. Berkshire covers a wide swath of the U.S. economy, from consumer goods such as party supplies and running shoes to transportation such as the BNSF railroad. The company’s first-quarter results should give investors a glimpse into how the conglomerate is faring, and it’s a topic likely to draw some comments from the billionaire investor, according to CFRA’s Seifert.

“By virtue of their breadth in the broader marketplace, I think that Warren is going to be forced to sort of comment on what the Fed is doing, what’s happening in Russia, energy strategy and things like that,” Seifert said.

Insurance has long been key to Berkshire’s success. The float, or money that companies can hold onto before paying claims, has swelled to $147 billion at the end of 2021 from just $19 million when Buffett’s company entered the business in 1967. And now, Berkshire is looking to become even larger in that market with its Alleghany purchase, one of its biggest deals in recent years. That takeover, which included a go-shop period that recently concluded without a rival bid, will give Berkshire more reinsurance operations, specialty insurance businesses, as well as a mix of non-financial businesses such as a funeral-product company and a toy and musical instrument business.

The deal will also help deepen Berkshire’s insurance leadership bench. Joe Brandon, the current Alleghany CEO, previously ran one of Berkshire’s reinsurers. Investors may also raise questions about the pool of talent at Geico. Todd Combs, who manages billions of Berkshire’s money as an investing deputy, was named CEO of the auto insurer at the start of 2020, with Buffett saying that he hoped Combs wouldn’t be in that role too long as the insurer aimed to pick the right person from within to lead Geico.

“The CEOs at Berkshire Hathaway Energy, BNSF and Geico are perhaps among the most important roles in the entire organization,” Edward Jones’s Shanahan said. “That seems very uncertain or unclear right now and, to me, that’s the leadership question that needs to be answered.”