Warren Buffett’s Berkshire Hathaway Inc. priced yen-denominated bonds on Thursday, as yield premiums in the Japanese market have tightened to the least in over two years.

Berkshire Hathaway sold 160 billion yen ($1.5 billion) of notes in a three-part deal. Average spreads on local Japanese corporate bonds have fallen to about 29 basis points, the least since December 2018, after the Bank of Japan adjusted its monetary policy to enable it to continue with easing over the long run. 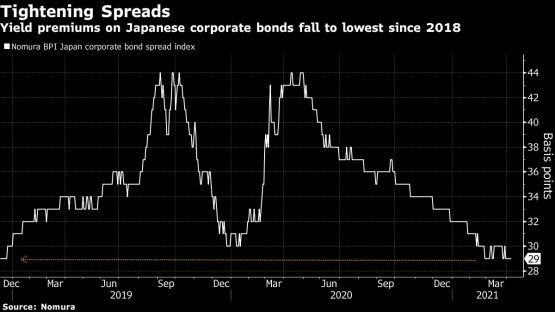 The offering gives Japanese investors an opportunity to buy into a well-known global firm while enjoying a bit more yield than is generally on offer in the local market.

As part of the deal, Berkshire Hathaway priced 80 billion yen of 10-year bonds at a coupon of 0.437%, compared with about 0.1% on Japanese government debt of the same tenor. The deal also included 5-year and 20-year notes, with expected ratings from Moody’s Investors Service and S&P Global Ratings higher than those given to Japanese sovereign debt by those firms.

The relative attractiveness of Berkshire Hathaway’s bonds can be seen also by comparing them with recent offerings from Japanese companies locally.

The US company’s 5-year note pays an interest rate of 0.173%, compared with 0.05% coupon on a similar tenor debt security priced by Toyota Motor Corp. last month. Nagoya Railroad Co. sold a five-year bond, which priced with a coupon of 0.09% in March that garnered demand almost nine times the issuance size.