Central bankers are the biggest risk to stocks in 2022, survey finds

The results of the poll offer a glimpse at some common industry expectations and concerns heading into 2022.
By Nikos Chrysoloras, Divya Balji and Jan-Patrick Barnert, Bloomberg 14 Dec 2021  15:24 A hasty policy shift by central banks anxious to tame surging inflation is the biggest downside risk for global stocks next year, according to an informal Bloomberg News survey of fund managers.

And with the post-pandemic rebound now past its peak, this month’s poll of 106 investors also shows that more market participants expect value stocks to outperform equities that soared this year on future growth expectations. While risks lurk, more than 40% of respondents singled out a more robust economic expansion as the main upside catalyst for 2022.

“We believe 2021 was a year of recovery and 2022 will be a year of resilience – investing in reshoring supply chains, digitalising businesses, innovating in health care and building a more sustainable planet,” said Katie Koch, co-head of fundamental equity for Goldman Sachs Asset Management, which oversees about $2 trillion in assets. One of the best opportunities she sees is in US small caps, as they give “exposure to the next generation of innovators and disruptors at attractive relative valuations.”

The results of the poll offer a glimpse at some common industry expectations and concerns heading into 2022, following this year’s ferocious rally that sent US and European benchmarks to successive historic highs. The survey was conducted by reporters who reached out to fund managers and strategists at major investment firms December 3 to 13.

The findings are in line with the latest Bank of America Corp. survey of global fund managers, which showed that hawkish central banks are seen as the biggest tail risk for the first time since May 2018, followed by inflation and Covid-19’s resurgence. Investors are bracing for major policy meetings of the Federal Reserve, the European Central Bank and the Bank of England this week, which might provide clarity on the pace of monetary tightening and the wind down of stimulus measures.

Here’s a summary of the main findings of the Bloomberg News survey:

A majority of respondents said that surging inflation or aggressive moves by central banks to curb rising prices are the biggest dangers for next year. “One of the biggest risks would be an over-tightening of monetary conditions,” said Julien Lafargue, chief market strategist at Barclays Private Bank. “While conditions have been met for emergency measures to be removed, it’ll be challenging for the US and the world economy to tolerate excessive interest rate hikes, especially coming from the Fed.”

Concerns over monetary tightening eclipse other risks, including a potential new flareup of the pandemic, a slowdown in China, or geopolitics. Still, this doesn’t mean that they are off the radar. “Covid, unfortunately, will be around, in one form or another, for the foreseeable future,” said Marcus Morris-Eyton, a portfolio manager at Allianz Global Investors, which oversees about $730 billion in assets. “But, importantly, we are becoming better at managing both the personal and the economic consequences.”

For some, the overall exuberance in the market itself is dangerous. “In reality we’re in a bubble as big as any I’ve experienced — cynicism has disappeared,” said Alasdair McKinnon, lead manager of the Scottish Investment Trust, which oversees about $890 billion in assets. “The most extreme signs of speculation are in crypto, SPACs and the general rush to IPO businesses.”

Despite agreement that inflation is a risk, pinpointing the level at which it becomes a danger for the equity market is trickier. For most respondents in Bloomberg’s survey, the problem begins when annual growth in US consumer prices is sustained above 3%. Still, almost a fifth said that it won’t derail stocks until inflation holds above 5%. For Salvatore Bruno, head of investments for Generali Investments Partners, the breaking point is annual US inflation persistently holding above 4%. The bond market’s reaction may matter more. Many strategists expect that interest rates will not keep up with increases in consumer prices, meaning inflation-adjusted, real yields on bonds will remain too low to make them a viable alternative to stocks.

“We think real rates are the crucial metric to be monitored in order to understand how markets could derail,” said Bruno, whose firm oversees about $650 billion.

Pascal Blanque, chief investment officer at Amundi, Europe’s biggest pure-play asset manager with about $2 trillion under management, agrees: “As long as central banks cap the nominal rates, and real rates remain so low, there is no alternative to equities.”

Inflation on both sides of the Atlantic is running at much higher levels than what the survey’s respondents said should cause alarm. While the Federal Reserve and the European Central Bank looked past the readings during the post-pandemic rebound, that won’t last for much longer, and they “will barely tolerate inflation above 4%-4.5% in 2022,” according to Blanque. 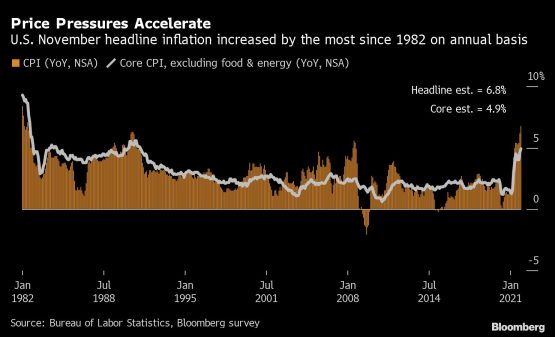 Of course, investors are also positioning for surprises on the upside. Chief among them is an economy that proves more resilient than current consensus expectations.

“There’s still room for a positive growth surprise given that households in developed markets have large savings piles that can be run down more quickly, while supply shortages could ease more quickly than widely assumed,” said Hussain Mehdi, macro and investment strategist at HSBC Asset Management, which oversees about $620 billion. “A strong labor market recovery also supports the outlook for consumption, while broad policy settings remain broadly accommodative despite a shift to normalisation.” Continuation of strong economic recovery is the basis of Goldman Sachs Asset Management’s positive view on stocks. “Our belief is that we’ll still have a robust growth backdrop next year,” Luke Barrs, head of fundamental equity client portfolio management in EMEA for GSAM, said by phone. “And whilst we’re conscious that inflation and interest rates could start to rise through the course of 2022, we don’t see that negatively impeding equity markets in the grand scheme of things as long as that growth dynamic stays robust.”

For 24% of the survey’s respondents, inflation proving transitory would be the most consequential positive surprise, though some said it would depend on the reasons. “Falling inflation rates can also have ‘negative’ reasons, i.e. a growth slowdown,” said Stefan Kreuzkamp, chief investment officer at DWS, which oversees about $990 billion.

So where are they investing next year?

According to the survey’s results, the time is finally ripe to look at cheaper, so-called value stocks, as 24% said those are their top pick for 2022. Respondents in Europe also flagged opportunities in small caps, while Cesar Perez Ruiz, chief investment officer at Pictet Wealth Management, which oversees about $275 billion, said his bet is on companies with pricing power that can weather inflation across sectors. 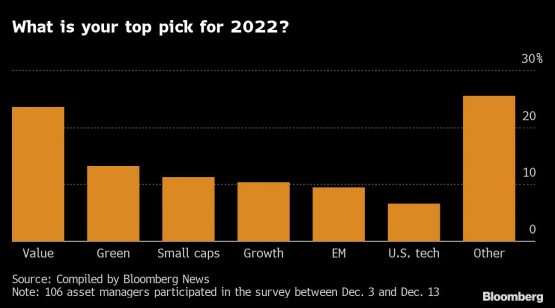 For Nieves Benito, head of fundamental research at Santander Asset Management, which oversees about $220 billion, “volatility is likely going to continue to be high and hence the top theme would be a market for stock pickers, where valuation disparities surge as markets might take long to anticipate improving fundamentals.”

George Lagarias, chief economist at Mazars Wealth Management, singled out the transition to a low-carbon and more sustainable economy. “It’s no exaggeration to say that the sheer amount of money institutionally directed toward ESG, not to mention the wall of regulations, are enough to render most other investment themes peripheral to the sustainability juggernaut,” he said.

As for geographic picks, respondents tended to favor the region they’re based in: Europeans are overwhelmingly overweight on European equities, while U.S.-based investors are more confident about American stocks and Asia-based responses are less pessimistic about China. For Kevin Thozet, a member of the investment committee at Carmignac, which oversees about $46 billion, “the area where valuations appear the most attractive” is emerging markets. “The potential for China to shift its policy mix while the US is expected to tighten both its monetary and fiscal policy should provide for a supportive backdrop for Chinese equities,” he said.