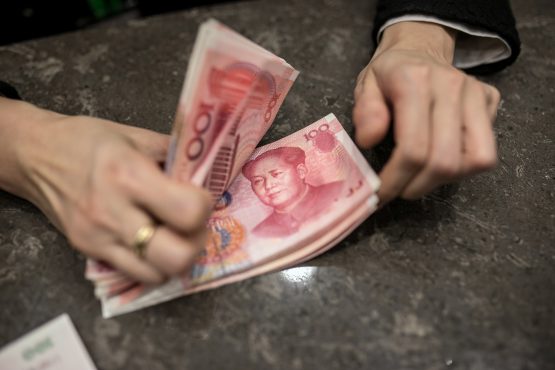 Moody’s Investors Service cut its rating on China’s debt for the first time since 1989, challenging the view that the nation’s leadership will be able to rein in leverage while maintaining the pace of economic growth.

Stocks and the yuan slipped in early trading after Moody’s reduced the rating to A1 from Aa3 on Wednesday, with markets paring losses in the afternoon. Moody’s cited the likelihood of a “material rise” in economy-wide debt and the burden that will place on the state’s finances, while also changing the outlook to stable from negative.

It’s “absolutely groundless” for Moody’s to argue that local government financing vehicles and state-owned enterprise debt will swell the government’s contingent liabilities, according to a statement released by the Ministry of Finance. The ratings company has underestimated the capability of the government to deepen reform and boost demand, the ministry said.

t wouldn’t be the first time a rating company was behind the curve, nor is such pushback unique — US Treasury officials questioned the credibility of a 2011 downgrade from Standard & Poor’s. Still, the move underscores broader doubts over whether President Xi Jinping’s government can simultaneously cut excessive leverage and steady growth, all with a twice a decade reshuffle of top party posts looming later this year.

“It is a psychological blow that China will not take kindly to and absolutely speaks to the rising financial pressures,” said Christopher Balding, an associate professor at the HSBC School of Business at Peking University in Shenzhen. That said, “it doesn’t matter much in the grand scheme of things because so much of Chinese debt is held by state or quasi-state actors and minimal amounts are international investors.”

The Aussie dollar slumped and iron ore led a decline in industrial commodities. Stocks were mixed, while oil rose.

Total outstanding credit climbed to about 260% of GDP by the end of 2016, up from 160% in 2008, according to Bloomberg Intelligence. At the same time, China’s external debt is low by international standards, at around 12% of gross domestic product, according to the International Monetary Fund, meaning that a downgrade isn’t likely to be as disruptive as it would be for nations more reliant on international funding. 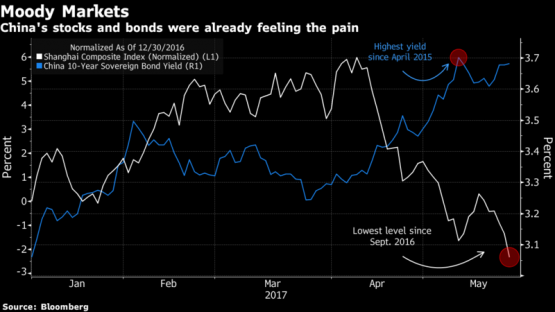 Overseas institutions’ holdings of onshore bonds dropped to 830 billion yuan ($121 billion) as of the end of March, from 853 billion yuan three months earlier, People’s Bank of China data show. That’s less than 1.5% of 63.7 trillion yuan of outstanding notes, according to Bloomberg calculations based on the central bank data.

Moody’s last cut China’s sovereign rating in 1989, when it downgraded the sovereign to Baa2 from Baa1, according to spokesperson, Manvela Yeung.

Those ratings contrast with home-grown Dagong Global Credit Rating Co.’s AA+ on China’s sovereign debt in local currency terms and AAA in foreign currency terms, the highest level. By contrast, Dagong rates the US as A- in both currency terms, below Russia and France.

“The stable outlook reflects our assessment that, at the A1 rating level, risks are balanced,” Moody’s said in the statement Wednesday. “The erosion in China’s credit profile will be gradual and, we expect, eventually contained as reforms deepen. The strengths of its credit profile will allow the sovereign to remain resilient to negative shocks, with GDP growth likely to stay strong compared to other sovereigns, still considerable scope for policy to adapt to support the economy, and a largely closed capital account.”

While China’s debt risks have been swelling for years, the cut by Moody’s comes as some of those pressures ease. Nominal economic growth in the first quarter rose at the fastest pace since 2012 — 11.8% in current-price terms — making the problem of excess leverage a little more manageable, while the return of factory price inflation is beefing up profits for indebted smokestack industries, helping them service and repay loans.

With the economic structure improving and government debt under control, the economy will continue to expand at a medium-to-fast pace, helping prevent debt risks, the finance ministry said in its statement on Wednesday.

“This cut is not solidly grounded,” said Wen Bin, chief analyst at Minsheng Securities in Beijing. “Policy makers have been well aware of the debt and leverage issues, and actions have been taken. It is a smart move if no one sees the problem and you are the first to flag it. But less so if it has already been noticed and addressed.”

The move may still discomfort China investors in that it highlights the risks to the economy rather than the ability of the government to control them.

“The downgrade comes at a bad time,” said Tom Orlik, chief Asia economist at Bloomberg Intelligence in Beijing, adding that it will make it more expensive to open the country’s bond market. “China’s leaders from President Xi Jinping down have said that structural reform and financial stability are priorities. Still, progress remains faltering and in some respects movement is in the wrong direction.”

are they just downgrading the whole BRICS? US and Europe are all junk and have been for nearly 10years but…just desperate attempts by imperialists and their agents.

It seems that the US (Creators of the 2008 Financial crash)
and the EU are immune to downgrades by the ratings agencies.

How many banks have crashed in the US and EU?

It seems that the US and EU can live the good life at the expense of the rest.

The rules they create do not seem to apply to them!