Looser monetary policy in China won’t be sufficient to stabilise the economy, a former adviser to the central bank said, arguing that the government needs to speed up spending as well.

“Under the current economic situation, the role the PBOC can play is limited,” said Yu Yongding, a member of the monetary policy committee of the People’s Bank of China in the mid 2000s, adding that he would “emphasise the importance of fiscal policy.”

The central bank has taken a series of easing steps in recent weeks, cutting key interest rates for the first time in nearly two years and encouraging banks to accelerate lending. That is all part of an effort to boost the world’s second-largest economy after growth slowed sharply in recent months due to a real-estate downturn, weak investment, and sporadic outbreaks of the coronavirus.

The impact right now of any monetary easing is limited as credit demand is relatively weak, Yu said in an interview last week. The Ministry of Finance, which controls government spending, should take the lead in boosting the economy while the PBOC can support expansionary fiscal policy, he said. 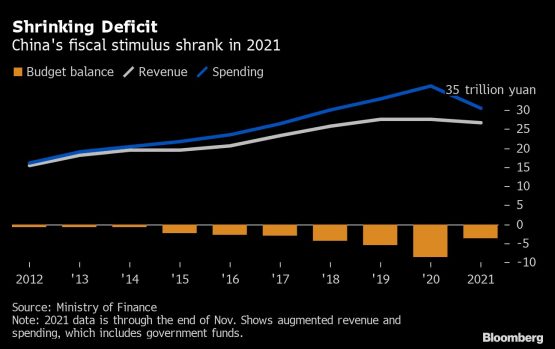 Until there is a decisive shift in fiscal policy, “monetary policy loosening should be limited because its not very useful as it may create other problems,” such as excess credit flowing into less-productive sectors, such as real estate, Yu said.

China’s fiscal stance has been contractionary in 2021, with the government deficit falling by about 40% in the first 11 months of last year compared with the same period in 2020. In December, Beijing urged local governments to step up infrastructure spending, but questions remain about how they will finance such an effort as a downturn in the housing market is limiting their income from property sales.

The government may set a budget deficit ratio of 2.8%-3% of gross domestic product this year, a similar magnitude to that in 2019, the state-run Securities Times reported Monday, quoting Chasing Securities analyst Wu Chaoming. The deficit doesn’t need to be raised in 2022 since a large amount of funds are still available from previous years when fiscal policy was expanded, the newspaper said, citing several analysts.

Yu has been advocating more aggressive fiscal policy since Beijing’s crackdown on local government debt began to slow infrastructure investment from 2017. His view is echoed by other economists, such as Xing Zhaopeng, senior China strategist at Australia & New Zealand Banking Group Ltd, who said that China’s key economic problems are supply-side constraints and insufficient demand, which won’t be solved by monetary policy alone.

Beijing has told local governments that they can begin issuing up to 1.46 trillion yuan ($230 billion) of “special” bonds used to fund infrastructure. But they won’t get permission to issue bonds beyond that amount until the national budget is approved in mid-March by China’s rubber-stamp legislature, the National People’s Congress. Bloomberg News reported that the 2022 quota for such bonds will be unchanged from last year.

Fiscal easing could be delayed until the end of the congress meeting, according to Yu.

“Perhaps we have to wait, because usually only after the NPC does the new budget come out,” he said.