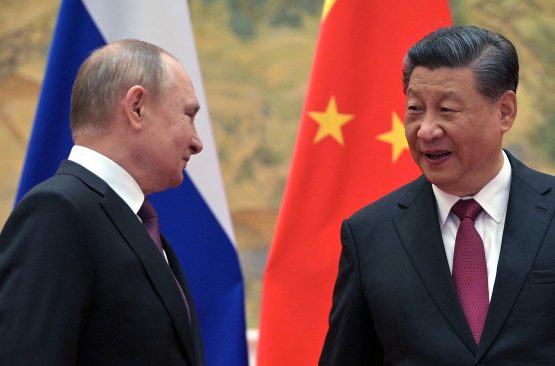 Caught flat-footed by Russia’s war on Ukraine, fund managers who get paid to avoid environmental, social and governance risks have started to look at China with a fresh sense of unease.

Their exposure to China is huge. Pure ESG funds domiciled just in Europe have about $130 billion invested in China assets, according to data compiled by Bloomberg. A further $160 billion is held by European-based funds that have screened for ESG-related hazards.

And yet the investment industry finds itself starting to contemplate the once unthinkable, as China’s ambiguous response to Russia’s invasion of Ukraine leaves the world on edge. China, the world’s second-largest economy, has sought to straddle both sides of the geopolitical divide, condemning the loss of life in Ukraine while blaming NATO for provoking Russia. And when the International Court of Justice voted to order Russia to “immediately suspend” military operations in Ukraine, only two countries dissented: Russia and China.

“It’s a time to be extra cautious,” said Kristin Hull, founder of Nia Impact Capital, a $400 million sustainability fund in Oakland, California. Given China’s much deeper connections with the rest of the world, “there are so many global ramifications of this relationship.”

Investors have already offered China a taste of what might happen if it strays too far into Russia’s corner. Its stocks were hit by a dramatic selloff on March 9, partly triggered by fears the US may punish Beijing for its close ties to Russia.

If China cozies up to Russia, that would “very potentially” influence his investment approach, Pilcher said in an interview. Roughly 3% of the $120 billion his group oversees is currently in China, he said.

Before Vladimir Putin’s February 24 invasion, there was no shortage of analysis explaining why he wouldn’t launch a full-scale war on Ukraine. That blindspot now has investors wondering whether they’re underestimating China’s ability to surprise them, potentially with an invasion of Taiwan. Type the words “China” and “invasion” in a Google search engine and the next word that appears unprompted is “Taiwan.”

The attack of Ukraine hasn’t only renewed scrutiny of the parallels between Russia and China, it has put the countries’ relationship in the spotlight. Just before the war began, Chinese President Xi Jinping hosted Putin at the Beijing Olympics, a public demonstration of warm relations.

For its part, the US has made clear it won’t tolerate any signs that the government in Beijing is providing economic or military assistance to Putin’s regime. The Biden administration also is urging China to unequivocally distance itself from Putin.

“The Chinese government isn’t beholden to anybody except for itself,” said Sonia Kowal, president of Zevin Asset Management. Russia’s invasion of Ukraine and the international condemnation through sanctions may be a dress rehearsal for China, she said in an interview.

“What we’re worried about is the risks become even higher going forward,” Kowal said. Boston-based Zevin, which managed $720 million as of the end of February, hasn’t yet decided whether it’s going to reduce its investments in China, she said.

Of the ESG funds holding Chinese assets, a number are categorised as Article 9, which is the highest sustainability classification within Europe’s Sustainable Finance Disclosure Regulation. Together, these funds hold $7 billion. A further $124 billion is in Article 8 funds, which is a laxer ESG category within SFDR.

About $162 billion is in Article 6 funds, for which managers screen their portfolios to decide whether it’s relevant to disclose ESG risks.

In a sign that China may be growing increasingly uneasy about what’s happening in Ukraine, state-run Sinopec Group suspended talks about a major petrochemical investment and a gas marketing venture in Russia, Reuters reported Friday.

The situation with China is “complicated,” said Joe Dabrowski, deputy director of policy at Pensions and Lifetime Savings Association in the UK, in an interview. The country is such a global power that any decision to blacklist it would have “such big knock-on consequences,” he said.

That this is even a debate for ESG managers, who now oversee roughly $2.7 trillion of funds, is a sign that the movement has lost sight of its purpose, according to Paul Clements-Hunt, who led the team that coined the acronym in 2004 together with the late former United Nations Secretary General Kofi Annan.

The “G” in ESG, which stands for governance, means investors should take the political regime of the country whose assets they own into account, Clements-Hunt said in a recent interview. “If you don’t factor in autocracy and a malevolent government, then you have failed in your ESG assessment,” he said.

And in a note to clients earlier this month, analysts at JPMorgan Chase & Co. wrote that the “Ukraine-Russia conflict may bring back to the fore the issue of how ESG investors manage investments in regions with governments of non-democratic and hybrid regimes.”

“What we are now witnessing is a very stark reminder that there are times when the only option you have is to walk away,” said Eric Pedersen, the head of responsible investments at Nordea Asset Management.

These ESG prophets are seriously confused. Since the ESG concept basically is anti-capitalist in nature, putting nice-to-haves above profits, and ignoring the freedom of choice of consumers in the process, investing in an oppressive communist regime should fit them like a glove.