China stocks in US suffer worst selloff since October 2008

As traders were whiplashed by renewed regulatory concerns following another day of intense swings in Asia.
By Matt Turner and Yiqin Shen, Bloomberg 11 Mar 2022  07:00 Chinese stocks listed in the US endured their worst day of trading since the global financial crisis as traders were whiplashed by renewed regulatory concerns following another day of intense swings in Asia.

The Nasdaq Golden Dragon China Index plunged 10% on Thursday, its biggest slide since October 2008. American depositary receipts of megacaps like Alibaba Group Holding Ltd. and Baidu Inc. tumbled at least 6%, with electric-vehicle companies including Nio Inc. and XPeng Inc. each down more than 9%.

Aside from the geopolitical concerns that have caught many global investors off guard, Chinese stocks have been under intense pressure after months of regulatory crackdowns. Thursday’s selloff was a swift change of fortunes for the nation’s shares traded in the US Just a day before, the group jumped the most in more than a month amid a broad-based rally in risk assets and speculation that Chinese authorities had stepped in during the Asian day to support the domestic market. 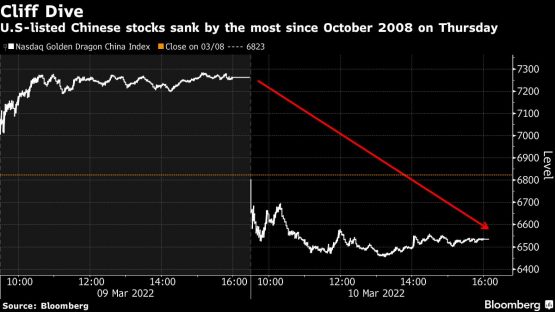 Investors in Hong Kong were treated to an equally wild day of trading Thursday, with the Hang Seng Tech Index climbing as much as 4.4%, then turning negative before closing higher by about 1%. That follows a similarly volatile session on Wednesday.

The US Securities and Exchange Commission this week identified five Chinese firms under the Holding Foreign Companies Accountable Act, which it says the Public Company Accounting Oversight Board was unable to inspect. The newly identified firms — BeiGene Ltd., Yum China Holdings Inc., Zai Lab Ltd., ACM Research Inc. and HUTCHMED (China) Ltd. — could be subject to delisting from US exchanges if they fail to comply with the HFCAA’s auditing requirements for three consecutive years.

“The renewed de-listing concerns is the primary driver for the the brutal selloff in Chinese ADR companies,” said Brendan Ahern, chief investment officer at KraneShares. That, combined with Russia-Ukraine tensions and smaller climb in Hong Kong shares overnight, are also impacting US trading, he added.

China’s Securities Regulatory Commission issued a statement Thursday saying it would like to work with US regulators on the accounting inspections in line with international practices. The CSRC added that it respects the measures taken to strengthen the supervision of accounting firms but opposes politicizing securities regulation.

A spokesperson from BeiGene told Bloomberg News that the biotech firm is “working to be compliant with the HFCAA” and expects to keep its listings on the Nasdaq, HKEx and the Shanghai Stock Exchange.

Despite Thursday’s deep selloff, not all analysts are ready to write the group off. “We maintain our view that the SEC update is not new news and any real risk of ADRs delisting will likely materialise by 2024-2025 when companies fail to disclose the requirement mandated by the SEC for three consecutive years,” said Citigroup analyst Alicia Yap.

“We suggest buying big cap ADRs that already have dual-listing in Hong Kong,” she added.