China stocks jump most since 2008, as state council vows support Stocks across Hong Kong and China staged a stunning rebound after China’s state council vowed to keep its stock market stable amid a historic rout that erased $1.5 trillion in value over the past two sessions.

The Hang Seng China Enterprises Index, which tracks mainland companies listed in Hong Kong, jumped as much as 13% on Wednesday, its biggest gain since the global financial crisis. A gauge of Chinese tech firms soared by record with Alibaba Group and Tencent gaining at least 24%.

The eye-watering rally followed a report by the official Xinhua news agency that China will keep the stock market stable and support overseas share listing, citing a meeting chaired by Vice Premier Liu He. The comprehensive statement also sought to resolve other woes that have plagued the market, particularly concerns over Beijing’s tech crackdown, saying efforts to “rectify” internet platform companies should end soon. Equities in the region have seen intense selling recently amid regulatory fears and speculation that Beijing’s ties with Russia may bring additional U.S. sanctions. Cheap valuations had lured some dip buyers, but lingering risks including a possible U.S. delisting of Chinese stocks and a lockdown in tech hub Shenzhen had been weighing on sentiment.

The statement also called for new policies to handle property developers’ risks, as well as a mention that regulators in both countries have achieved positive progress on the issue of Chinese stocks listed in U.S. markets. The report follows a series of articles by state media in recent days seeking to talk up sentiment.

“Usually the market’s natural bottom comes after the policy bottom, which we are seeing now,” said Li Weiqing, fund manager at JH Investment Management Co. “This time around things may be different, as the rout was looking like a financial crisis; the macro figures are also pointing to a bottom. But even if this is not the end, we can at least expect more stability in the next week or so.”

China’s benchmark CSI 300 Index closed 4.3% higher, the most since July 2020. Prior to Wednesday’s session, the index was down more than 19% this year, one of the worst performing national benchmarks globally. 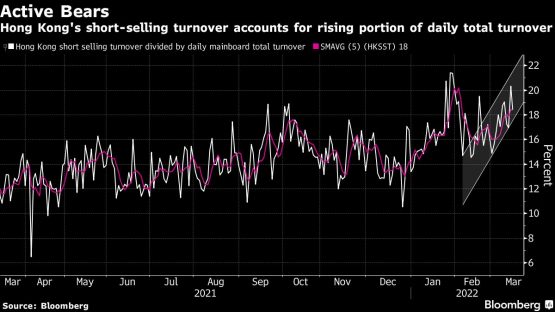 Even with the latest bounce, some market watchers say it’s too early to call an end to the rout, maintaining a wait-and-see stance to see if the verbal promises materialize into concrete policies. JPMorgan Chase & Co. earlier this week labeled some Chinese internet names as “uninvestable” in the short term.

The 10-day volatility of the Hang Seng Index is higher than any major stock market benchmarks in the world, Bloomberg-compiled data show. Meanwhile, short sell turnover in Hong Kong shares accounted for more than 20% of total equity trading on Monday morning, the highest since late January, according to data compiled by Bloomberg.

“Personally I fear that the crisis the market faces is not just about China, it’s a global issue, and not just something that regulators can solve with this,” said Wang Mingxuan, fund manager at Quant Technology Investment. “The calm this bring is just the calm before the storm.”