And it could potentially change consumption patterns.
By Bloomberg News 16 May 2021  00:46 The meteoric rise in palm oil prices is poised to inflate costs for everyone from restaurants to confectionery and cosmetic manufacturers, and could potentially change consumption patterns.

The world’s most consumed edible oil has surged more than 120% in the past year and burst through 4 500 ringgit ($1 091) a ton to a record on Wednesday. The tropical oil, which is found in products as diverse as chocolate, pastries, soaps, lipstick and biofuel, and is widely used in Asian restaurants, has been swept up in the global commodity rally as farm crops soar on weather worries and China’s crop-buying spree. 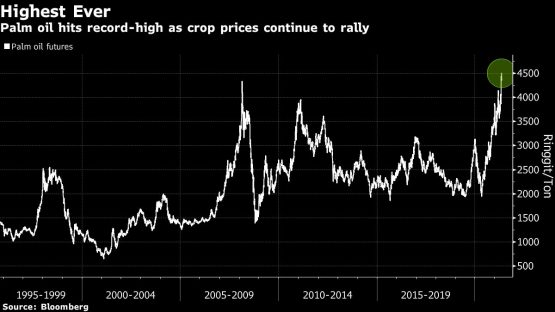 Palm oil, which is mainly produced in Indonesia and Malaysia, is so popular that one study estimates about half of all packaged products found in supermarkets contain it. While there are alternatives — like soybean oil and sunflower oil — prices for those have been rising too, increasing concern over global food inflation, which is already at the highest in seven years.

“We’re in uncharted waters at these levels,” said Marcello Cultrera, an institutional sales manager and broker at Phillip Futures in Kuala Lumpur. “The high prices will mainly affect costs of fast-moving consumer goods’ manufacturers in the short term.”

The biggest importer is India, followed by China. While the oil faces headwinds in Europe and the U.S. over concerns its cultivation causes deforestation, the rally in edible oil prices could add to costs at companies such as Unilever, which purchases about 1 million tons of palm oil, palm kernel oil and derivatives annually for use in products such as ice cream, cosmetics and soaps, making it one of the world’s largest buyers. 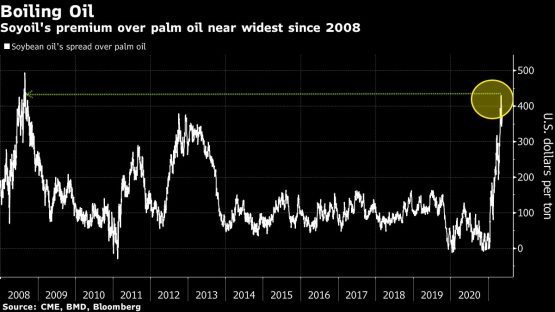 Consumption in India is especially at risk because of a drop in demand outside the home and the impact of the world’s worst Covid-19 outbreak, according to Atul Chaturvedi, president of Solvent Extractors’ Association. The country is a very price-sensitive market and high prices are hurting demand, he said.

Companies wanting to shift out of palm to other oils may find opportunities limited due to higher costs whichever option they choose. Soybean oil, the second-most consumed oil, is up 150% in the past year, and sunflower oil prices from Ukraine have more than doubled.

“The rise in prices to all-time highs is bound to affect consumer habits,” said Gnanasekar Thiagarajan, head of trading and hedging strategies at Kaleesuwari Intercontinental. “Consumption is expected to go down, and if this uptrend in prices is maintained, there could be a shift in food habits that could altogether change food preferences.”

It just comes down to political price-fixing.