Citigroup steps up hiring across Africa with bond crown in sight

As it surges past rivals to reclaim the top spot in arranging debt sales in the region.
By Roxanne Henderson, Bloomberg 7 Jul 2021  08:10 Citigroup could add close to 100 new employees to its businesses across the African continent as it surges past rivals to reclaim the top spot in arranging debt sales in the region.

The New York-based bank has already started filling roles to add muscle to its local operations in anticipation that the headcount in sub-Saharan Africa will swell by about 10% from nearly 900.

“We are looking to build some capacity in our coverage teams and in our corporate banking and markets businesses as well,” Dawodu said from Lagos, where he’s based. “We see clients still looking to go out into the markets and raise money.”

Citigroup is on the prowl for talent across the $1.7 trillion economy of sub-Saharan Africa, a region of about a billion people, after rolling out flexible work policies as a tool it believes will offer a competitive edge in recruiting and retaining top staff.

US rival Goldman Sachs Group Inc. is similarly hiring to grow its reach in the region through its South Africa unit while some of the continent’s largest lenders, including Standard Bank Group Ltd., continue to plow resources into expansion of their operations. 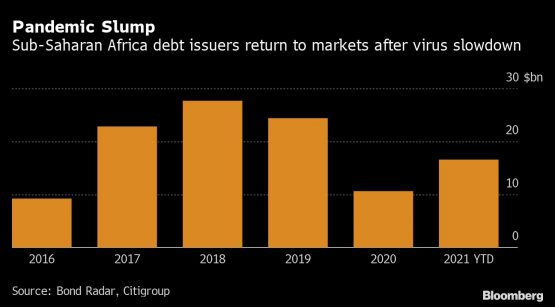 When Citigroup first established a presence in South Africa about a century ago, the firm’s focus was on ushering foreign investors into the region. The US bank has since expanded its footprint to about 12 other sub-Saharan African nations and is increasingly aiding the continent’s investors in accessing international markets.

It’s also emerged as the largest arranger of debt sales in sub-Saharan Africa this year for the first time since 2018, according to data compiled by Bloomberg.

Citigroup had dropped outside the top five in the past two years, supplanted by local competitors such as Johannesburg-based Standard Bank Group Ltd. and others including Standard Chartered Plc and JPMorgan Chase & Co. After the pandemic-era lull, bond issuance across sub-Saharan Africa’s capital markets has kicked off the year on a better footing. Volumes raised this year are already on track to match levels last seen in 2018, with over $16 billion sold thus far, according to data compiled by Citigroup.

As appealing pricing draws in foreign investors, borrowers see scope to better manage their maturity profiles and ease coming refinancing pressures. The governments of Ghana, Senegal, Benin and Kenya have all waded into the debt market this year.

The lender is also seeing an uptick in investors seeking sustainable projects to back and growing interest in supply-chain financing, he said.

Activity is returning to African markets even as the continent lags the efforts of more developed economies to inoculate their populations and guard against the spread of new Covid-19 variants. Despite the threat of more virus waves, the region has shown resilience in managing the pandemic, Dawodu said.

“We are optimistic that we know more about the virus and its impact and how to react to it now that we did 15 to 18 months ago,” he said. “Quickening the pace of the vaccination is critical to the outlook for SSA, and that’s something we are hoping to see.”