The world’s supply of cooking oil — already squeezed by war — is getting smaller.
By Kim Chipman, Megan Durisin and Michael Hirtzer, Bloomberg 23 Apr 2022  10:20 Two months after Russia’s invasion of Ukraine upended global agricultural trade, Indonesia is set to ban exports of cooking oil in the wake of a local shortage and soaring prices, adding to a raft of crop protectionism around the world. The country accounts for more than a third of global vegetable-oil exports, with China and India, the two most populous countries, among its top buyers. 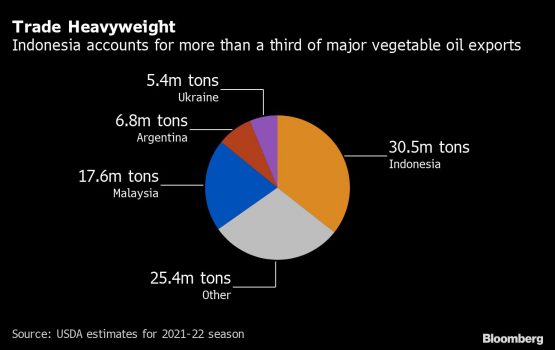 Indonesia is the biggest producer of palm oil, the world’s most consumed edible oil. The southeast Asian nation’s announcement of the ban on Friday sent US futures tied to soybean oil, an alternative to palm, soaring to the highest price on record for a third straight day. In the UK, some supermarkets are limiting purchases of cooking oils, like sunflower, olive and rapeseed.

Russia’s invasion of Ukraine has thrown the trade of sunflower oil into chaos and is squeezing already tight supplies of other vegetable oils used in food, biofuels and personal care products.

Weather woes across the world’s major producers of edible oils are adding to fears of shortages. Dryness has crimped the size of soybean harvests in South America, the world’s biggest producer, and drought in Canada shrank production of canola, leaving little available supply.

While limited supply and soaring prices are set to worsen inflation of food items like salad dressing and mayonnaise in wealthy economies like the US, developing nations like India are set to feel the worst impacts. Such countries depend on imports of palm oil as a cheaper alternative to more costly soybean, sunflower and canola oil.

“We are terribly shocked by this decision of Indonesia,” said Atul Chaturvedi, president of Solvent Extractors’ Association of India, and edible oil trade group. “We were not expecting a ban like this.”

The surge in core food costs is also leading to the biggest debate in a decade over using farmland to grow crops for producing fuel. The American Bakers Association, whose members produce 85% of US baked goods, is warning about empty grocery store shelves.

“We desperately need the US Environmental Protection Agency to take the right action to allow soybean oil stocks to shift back into food instead of being diverted to biodiesel production,” said Robb MacKie, the trade group’s president.

Food-versus-fuel tensions are also flaring in other regions, including Indonesia.

The latest action by Indonesia is certain to “aggravate” food inflation that’s already at a record high, said Tosin Jack, commodity intelligence manager at Mintec in the UK Tight vegetable oil supplies are already prompting food manufacturers to improvise with their products, including trying to come up with new formulations and switch to substitutes when possible, according to Jack.

For makers of packaged items like chips — whose ingredient lists often allow flexibility by stating the food can contain multiple vegetable oils — the move by Indonesia takes one more oil off an ever-shrinking list.

Changing food recipes though can be daunting and “does not necessarily produce a product with the same sensory characteristics,” said Jeannie Milewski, executive director for The Association for Dressings & Sauces, an Atlanta-based trade group that represents makers of products that most often rely on soybean oil. Soybean oil futures in the US have nearly doubled since the start of 2021, driven in part by higher demand for ingredients to make biofuel. Prices then shot up to the highest on record after Russia’s attack on Ukraine disrupted sunflower oil shipments and set off demand for alternative commodities.

Canadian canola had already climbed to an all-time high last year as devastating drought shrank crops across North American prairies. Palm oil in Asia has risen about 50% and rapeseed in Europe 55% in the past 12 months.

Still, “despite record prices overall, vegetable oil demand remains high because vegetable oils are an essential part of diets in all countries and particularly in countries like India, Pakistan, Bangladesh,” said John Baize, an independent analyst who also advises the US Soybean Export Council.

For now, Indonesia’s ban intensifies worries about food costs and shortages, with expectations that other countries are likely to make similar moves as the war in Ukraine drags on.