The real death toll from Covid-19 is likely far higher than 3 million, due to under and patchy reporting around the world.
By Jinshan Hong, Bloomberg 19 Apr 2021  07:35 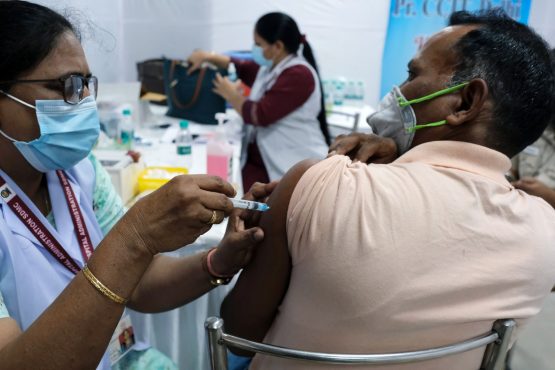 The relentless pace of death from the global Covid-19 pandemic is continuing unabated despite global vaccination efforts, and is now being increasingly borne by the poorest places in the world.

More than 3 million lives have been lost as a result of the novel coronavirus that emerged in 2019, with the latest 1 million recorded deaths coming even faster than the first two. It took about 8.5 months after the initial fatality in China to mark the first million, and just another 3.5 months to reach the second million.

The death toll passed 3 million on Saturday, according to Johns Hopkins University data, only about three months since crossing the 2 million mark on January 15. The shortening intervals, coupled with the increasing number of new cases worldwide, is dealing a blow to hopes that the end of the pandemic is in sight with the widespread deployment of vaccines. 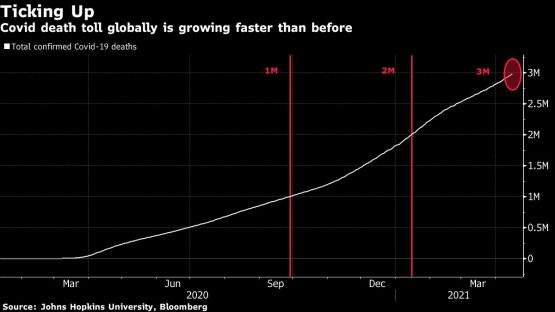 The grim milestone underscores a widening disparity in combating the pandemic, which parallels the gap in vaccine access. While mortality rates have largely slowed in the US and parts of Europe thanks to vaccine rollouts that promise a return to some semblance of a normal life, the developing world — Brazil in particular — is shouldering a rising death toll.

Just five places account for about half of the last million deaths. The US alone claimed 18% of the world total, still the highest country share.

But the ground is shifting. The mortality burden is growing in less wealthy parts of the world, including those that are struggling to access vaccines. Among the last million fatalities, Brazil’s share grew by 9.5 percentage points compared to the previous million deaths, followed by Mexico and Peru. Other countries have reduced their share of the last million fatalities, with India, Iran and Argentina dropping the most. Developed countries from Italy and the US to France and Belgium also had a smaller share in the new death toll compared to the previous million.

The findings underscore the need to get immunisations out to the world, public health officials said. About 40% of the Covid-19 vaccines administered have gone to people in 27 wealthy nations that account for just 11% of the world’s population, according to the Bloomberg Vaccine Tracker.

“There are many countries where people haven’t received a single immunisation,” said Bali Pulendran, a professor of microbiology and immunology at Stanford University in California. “It’s not sufficient to vaccinate everyone in a single country. Unless you vaccinate the entire population, you aren’t going to control the pandemic.”

Health workers administer a dose of the Bharat Biotech Ltd. Covaxin vaccine to an employee of the income tax and the central goods and services tax (CGST) departments at the Central Revenue building in New Delhi, India, on Monday, April 12, 2021. Asia’s third-largest economy is potentially on track to regain the second spot from Brazil after adding a record 168,912 cases in a day, taking the tally to 13.53 million cases.

Disparities in immunisation pose a threat to the world. The more the coronavirus spreads unchecked, the more opportunity it has to develop dangerous mutations. Some existing vaccines have already been shown to be less effective against new variants like the one from South Africa. The chance of a mutation entering a highly-vaccinated country and igniting another wave of Covid cannot be discounted. “Vaccines are giving us light at the end of the tunnel but we’re not there yet,” said World Health Organisation Director-General Tedros Adhanom Ghebreyesus in a briefing earlier this month. “We must all continue to protect ourselves and those around us by making the right choices.