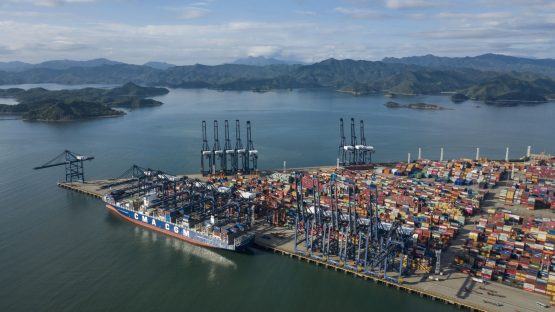 The number of vessels waiting to enter one of the world’s busiest ports jumped to the most since August, threatening to further snarl global supply chains strained by a surge in consumer demand for everything from cars to computers.

China’s Yantian port in Shenzhen suspended pick-up and drop-off of containers as tropical cyclone Kompasu approached the nation’s southern coastline. The number of ships waiting outside the port rose to 67, the most since August 26, according to shipping data compiled by Bloomberg. Located near China’s tech capital of Shenzhen and the manufacturing belt of the Pearl River Delta, Yantian is one of the world’s busiest ports, with a cargo throughput of 13.34 million twenty-foot equivalent units in 2020, according to figures from the Shenzhen Transportation Bureau. It typically serves about 100 ships a week.

Kompasu is the second tropical storm to affect southern China in the last few days, after Lionrock brought flooding to some low-lying areas of Hong Kong over the weekend. The damage from Kompasu could be more severe based on its current track and intensity forecasts, Bloomberg Intelligence analyst Steven Lam wrote in a note Monday.

Bottlenecks at container terminals around the world have added to pressure on supply chains already struggling to keep up with demand. Covid-19 outbreaks at ports, along with shortages in shipping containers and labor have exacerbated the problem, with China — the world’s biggest manufacturer — seeing a number of port disruptions this year.

The country has a zero tolerance approach to the virus, and has shut down port operations on single cases in the past. An outbreak at Yantian in June saw it closed, resulting in falling volumes as far away as the Port of Los Angeles. The Ningbo-Zhoushan port shut for two weeks in August because of a delta variant infection.

Weather has also played havoc, with Shanghai’s container port, the world’s biggest, halting some operations last month amid a typhoon.