Investors looking to ride the industrial recovery could do a lot worse than a Deere tractor.
By Brooke Sutherland, Bloomberg 5 Dec 2020  00:18 The maker of the iconic green-and-yellow plows and diggers reported fourth-quarter results on Wednesday, continuing a tradition of pre-Thanksgiving numbers. Even after a banner summer quarter and a significant jump in analysts’ earnings estimates, Deere & Co still managed to outperform in the three-month period ended November 1. Not only that: Deere is targeting as much as $4 billion in net income in 2021, a record. For context, that’s in line with analysts’ estimates for 2022 — meaning Deere is a full year ahead of schedule. Deere’s earnings report fits in with the broader narrative of an industrial recovery that’s continuing apace despite a resurgence in coronavirus cases across the world. Separately on Wednesday, data from the Commerce Department showed that US durable goods orders increased at a faster-than-expected rate in October. Core bookings (which exclude defence and aircraft purchases), also surpassed economists’ estimates. That positive momentum — coupled with the recent good news on the vaccine front — has fuelled a sharp rally in industrial-related stocks in recent months. Indeed, going into earnings day, Deere shares were up more than 50% for the best year-to-date showing since 2007. But while valuations are getting ahead of themselves in some corners of the industrial world and downright stretched in others, a deeper look at Deere’s latest earnings suggests the stock’s rally has further to go.

Demand is part of it. Whereas many parts of the economy were running hot before the pandemic, the agricultural sector had been mired in a multiyear slump, in part because of the US-China trade war. Farmers are working with the oldest tractor fleet in more than a decade, leaving ample room for a recovery as rising crop prices and improving visibility in export markets at last give them the confidence to start spending again. Through the end of September, China’s agricultural spending was tracking well below the country’s purchasing commitments in the phase one trade deal inked pre-pandemic, says Bloomberg Intelligence analyst Christopher Ciolino. Lately, though, the country has been stepping up its purchases to help feed a hog population that’s recovering from the African swine fever. President-elect Joe Biden’s administration is expected to de-escalate tensions with China, which may help support demand. Deere expects a 10% to 15% sales gain for its agricultural segment in fiscal 2021.

But farmers aren’t just buying any old tractor; they’re paying up for them, too. Operating profit in the agricultural segment was up an impressive 63% relative to an 8% sales gain in the fourth quarter. The biggest factor was higher prices. Deere has stopped trying to sell tractors to everyone in the world and is instead focused on highly differentiated products that can help large farmers improve productivity, Melius Research analyst Rob Wertheimer said this week in a video presentation.

While much of the initial margin improvement opportunities have now been priced in to the stock, Deere is aiming to further press its advantage by investing in software and data-management tools that can drive higher crop yields and increase precision, he said. The idea is to build an ecosystem that makes Deere indispensable to farmers, not just in the physical harvesting and planting operations but the planning of those processes as well. 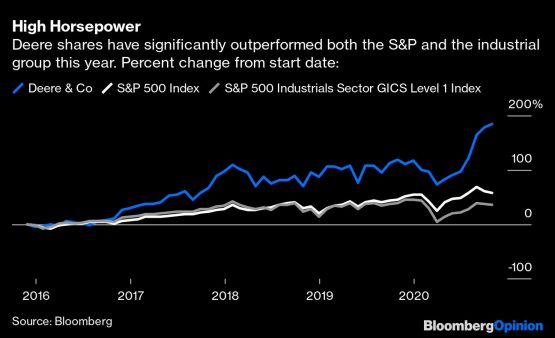 The most promising of its technology offerings — the Blue River artificial intelligence platform, which can distinguish between weeds and crops and spray herbicides accordingly — is expected to become commercially available in 2021. Deere said on Wednesday that it was targeting an operating margin of 15.5% to 16.5% for its agricultural segment next year. That compares with 13.3% in 2020 and 10.6% in 2019. That kind of profit lift doesn’t come around every day.

It’s been a difficult year in so many ways, but Deere investors at least have plenty to be thankful for.