Evergrande’s inability to meet its obligations is a market event and will be dealt with in a market-oriented way, the People’s Bank of China Governor Yi Gang said Thursday.
By Jan Dahinten, Bloomberg 9 Dec 2021  11:22 The two firms were downgraded to restricted default by Fitch Ratings, which cited missed dollar bond interest payments in Evergrande’s case and failure to repay a $400 million dollar bond in Kaisa’s.

Evergrande’s inability to meet its obligations is a market event and will be dealt with in a market-oriented way, the People’s Bank of China Governor Yi Gang said Thursday.

Yi’s comments offer the latest signal that Beijing won’t bail out Evergrande as it strains under $300 billion in liabilities. He also said that interests of investors should be handled according to seniority of their capital. 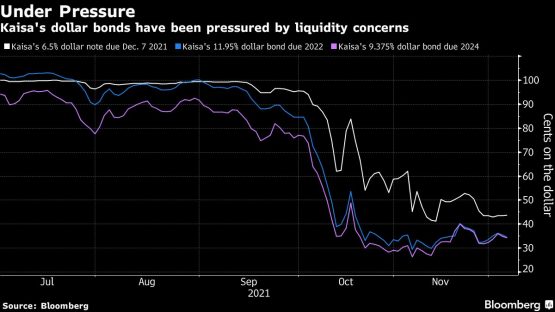 China Evergrande, the Chinese developer whose liquidity crisis has shaken the nation’s credit markets, has defaulted for the first time on dollar debt.

The non-payment of that security also “triggered events of default for the company’s other US dollar notes, which will become immediately due and payable if the bond trustee or holders of at least 25% in aggregate principal amount of the offshore notes declare so,” Fitch said.

PBOC’s Yi Says Evergrande Should Be Dealt With by Market (2:34 p.m. HK)

The debt crisis at China Evergrande is a market event and investor interests should be handled based on seniority of capital, People’s Bank of China Governor Yi Gang said.

“The rights and interests of creditors and shareholders will be fully respected in accordance with their legal seniority,” Yi said in a video message to a seminar in Hong Kong.

Hong Kong has established an effective system and well defined legal provisions to deal with these issues, Yi said. A few firms in the short term will not undermine Hong Kong’s financial system in the long term, he said.

The head of Hong Kong’s Securities and Futures Commission said its stress tests in the wake of the property industry debt crisis in China had not shown elevated systemic risks in the the city’s financial system.

“What we see now is actually no different to what we saw a few months ago,” SFC CEO Ashley Alder said in an interview with Bloomberg TV’s Stephen Engle.

“Is the financial system here, or elsewhere, as vulnerable as it turned out to be in the wake of Lehman? The answer to that is no. It’s a significant event, you can’t possibly underplay it, but it’s basically not that category of event for the financial system.”

Receivers Have Been Appointed for Fantasia Holdings Group (12:40 p.m. HK)

Hopson Development Holdings proposed to issue $250 million of 8% guaranteed convertible bonds due 2022. The initial conversion price is at HK$20.16, representing a premium of 4.56% over the last close at HK$19.28.

A group of Kaisa bondholders is close to signing non-disclosure agreements with the property developer in a move that would pave the way for discussions around a potential financing deal for the beleaguered firm, people with knowledge of the matter said.

The creditor group is being advised by Lazard Ltd. An announcement about the agreements could come as early as Thursday morning in Hong Kong, one of the people said. Lazard is seeking more bondholders to join the group.

A representative for Kaisa didn’t immediately respond to a request for comment placed outside of normal business hours.

The CCP will bail them out one way or the other – the loss of face to the West would be too humiliating to otherwise.