The collapse of Draghi’s government was inevitable after three of his coalition partners withdrew their support in a confidence vote Wednesday.
By Alessandro Speciale and Chiara Albanese, Bloomberg 21 Jul 2022  11:38 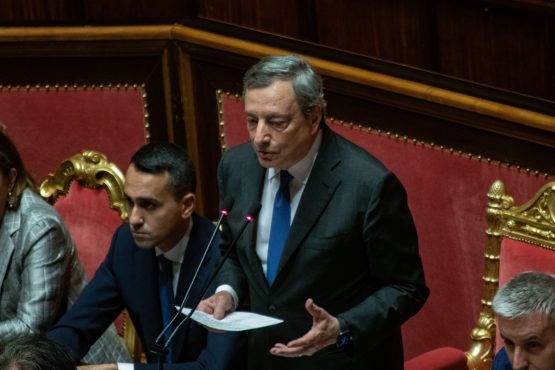 Mario Draghi resigned as Italy’s prime minister, throwing the country into turmoil and putting it on course for snap elections as soon as early October.

The former European Central Bank chief delivered his decision to President Sergio Mattarella Thursday morning. The government will continue in a caretaker role to handle ongoing business but its influence will be minimal.

Mattarella, who accepted the resignation, will meet Thursday afternoon with the speakers of both houses of parliament to agree on the next steps, which will likely include an emergency vote after the summer. The ballot may take place on October 2. Fall elections are unprecedented in Italy, a time when parliament is usually preparing the annual budget.

Investor reaction was clear, with the yield on the Italy’s 10-year note jumping as much as 21 basis points to 3.6%, its highest since June. The spread over equivalent German bonds, a common gauge of risk, rose to 233 basis points. Italy’s benchmark stock index fell 2.2%.

The resignation throws the country into turmoil just as Europe is bracing for a recession and Italians are contending with a brewing energy crisis. Lawmakers — now without the discipline imposed by the ex-central banker — will need to agree on reforms in order to unlock 200 billion euros ($205 billion) in European Union aid.

The collapse of Draghi’s government was inevitable after three of his coalition partners withdrew their support in a confidence vote Wednesday.

Italy’s problems reached a boiling point last week when the Five Star Movement, a key coalition partner, boycotted a confidence vote. Draghi said he no longer had broad backing and threatened to resign unless all the members in the unity government pledged their support.

Instead, Matteo Salvini’s League and Silvio Berlusconi’s Forza Italia joined Five Star in abandoning Draghi on Wednesday after a heated Senate debate, leaving the prime minister few options other than to quit his post.

Italian governments are notoriously unstable and Draghi led the 67th government the country has had in just over 75 years. And while Draghi will likely remain caretaker prime minister until the next vote, the government will be dramatically weakened, putting its legislative agenda at risk.

Paolo Gentiloni, the EU’s economy commissioner, warned late Wednesday that “a perfect storm” could lie ahead for Italy. The EU will have to assess how the political upheaval will affect the country’s planned reforms and whether it can unlock its pandemic aid according to the agreed timeline.

Tensions had been mounting between the premier and Five Star leader Giuseppe Conte, a former prime minister who’s been critical of Draghi’s response to the economic crisis and the government’s stance on shipping weapons to Ukraine. Five Star splintered last month when members couldn’t agree on how much support to give Kyiv.

Italian parties have now entered campaign mode.  Based on current polls, a right-wing tie-up led by Giorgia Meloni’s Brothers of Italy would win a snap election if its members stick together.

Even though Five Star triggered the collapse by withdrawing government support last week, its influence is poised to wane. The party’s popularity has plummeted since it entered government and it would likely lose seats in a new election.