ECB poised to take next step in revolutionizing euro-zone money 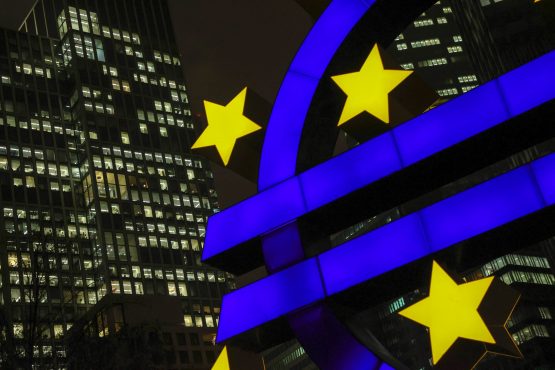 The European Central Bank is about to take the next step in reinventing the region’s money as it marches toward the creation of a digital euro.

Policy makers will decide on Wednesday whether to move to an exploratory phase, which President Christine Lagarde reckons could take about two years. Ultimately, euro-zone citizens could be holding a virtual central-bank currency by the middle of this decade.

“It will touch people’s life in a very intimate way,” Lagarde told Bloomberg Television on Sunday. “What we’ve heard from the people is that they want privacy to be protected. But at the same time we need to make sure that it’s not accelerating money laundering or the financing of terrorism, so on each and every aspect we have to strike the right balance.” If the ECB goes that route, it’ll likely follow in the footsteps of China, where trials have started in several cities. Eastern Caribbean islands that share a central bank, including Grenada and St. Kitts and Nevis, have already launched their own digital currency. The US Federal Reserve and Bank of England are looking into the possibilities for their economies.

While a digital euro isn’t certain, its likely features are already crystallizing. Research and official remarks portray a payment system that is fast, easy to use, secure — and, crucially for Lagarde, who has lambasted private crypto-assets — not Bitcoin. Here’s what we know so far.

The ECB’s website says a digital euro would be “like banknotes but digital.” In reality, a key characteristic of notes and coins — the ability to make payments that are simultaneously anonymous and offline — will be challenging to replicate.

Sweden’s Riksbank noted in a report this year that digital currencies will need to be verified by a remote ledger to avoid counterfeiting, compromising anonymity.

The ECB appears to have recognized that, saying in a report last year that “the Eurosystem would be best placed to win the trust of European citizens in an offline payment tool,” and that “anonymity may have to be ruled out.”

It did see room for a “selective” approach to privacy though. The system could allow certain types of transaction to be executed without registering the identity of the payer and payee.

The ECB has promised one outcome at least, saying “a digital euro would not replace cash, but rather complement it.”

Commercial banks are fretting about what the innovation would mean for them. One risk scenario is that customers shift their deposits to the perceived safety of the ECB in a crisis — effectively a digital bank run.

To reduce that risk, Executive Board member Fabio Panetta has suggested either a limit of about 3,000 digital euros ($3,550) that can be held by any individual, or deeply negative interest rates above that level to discourage large holdings.

Banks will still have plenty to do though. The ECB doesn’t want to deal directly with hundreds of millions of account holders — while it would take charge of the technological infrastructure and supervision, it has signaled a preference for having intermediaries provide access to the digital euro.

Central bank digital currencies are certainly inspired by the rise of crypto-assets. The ECB said only last month that nations which decide not to introduce them face threats to their monetary autonomy, leaving them reliant on a small number of dominant, often foreign, payment providers.

But they don’t have to adopt the same technology. The ECB is concerned that so-called distributed ledger technologies such as a blockchain, which underlies Bitcoin, rely on a decentralized verification process that could compromise oversight. They can also be difficult to scale up.

The central bank already has another system called TARGET Instant Payment Settlement, or TIPS, which it launched in 2018 and which could be more suitable. It could also consider a hybrid system that uses both TIPS and DLT.

Bitcoin has attracted heavy criticism for the voracious energy use needed to power the computers that run the complex calculations to maintain its network.

Traditional money also requires resources though — copper and tin for coins, fossil fuels for transport, electricity for ATMs. A 2018 study by the Dutch central bank showed the energy consumed to enable a typical purchase with notes and coins could light an 8-watt bulb for two hours. For a debit-card transaction, that falls to 90 minutes.

Depending on the technology behind a digital euro — and if it encourages consumers to shift away from cash — payments could become more environmentally sustainable.

However, if it were to use a parallel infrastructure to those already in place, that could be costly. The ECB appears torn on this point. It could decide that it needs a parallel infrastructure to withstand extreme events such as cyber attacks or natural disasters, but acknowledges it would undermine the aim of improving the cost and environmental footprint of payments.

The ECB’s web page on the digital euro has little to say on monetary policy, but last year’s report showed that it could be a “powerful tool” and that a role “could materialize in the future.”

It could remove some of the hurdles to cutting interest rates even further below zero to stimulate the economy, as digital euros can’t easily be hoarded.

It would also make helicopter money — transferring cash directly to consumers to boost consumption — easier to implement. Lagarde and her predecessor Mario Draghi have labeled that last-resort policy as one for governments rather than central banks to decide.

Lagarde has shown for enthusiasm for a digital euro, but hasn’t insisted on it and says she’s not rushing to be among the first to implement one. Still, Wednesday’s meeting looks set to take the euro zone a lot closer.

“My suspicion is that Governing Council will be very supportive to explore for the next two years,” she said. “Then in two years’ time, whether it’s a ‘let’s go and have a digital euro’ or not, I think will be then decisive.”