Such were the powers of persuasion that investors handed over hundreds of millions of dollars without insisting on audited financials.
By Barbara Curson 5 Jan 2022  00:10 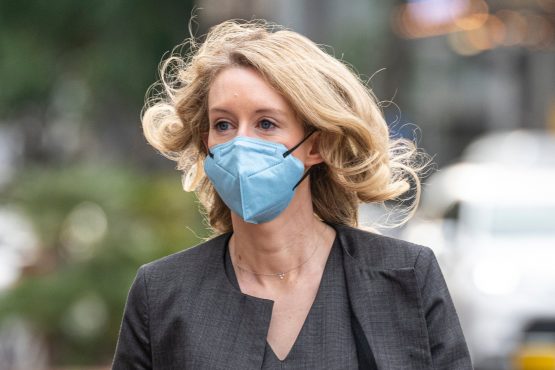 After a month-long criminal lawsuit brought by the US federal government, supposed business woman extraordinaire Elizabeth Holmes has been found guilty of three counts of wire fraud totalling US$ 144.3 million, and one count of conspiracy to commit wire fraud.

The jury could not reach a verdict on a further three counts of wire fraud, and she was found not guilty on the other four felony charges related to defrauding patients.

Judge Edward J Davila instructed the jury to resume deliberations on the three deadlocked charges to reach a verdict.

Fair-haired with huge blue eyes, the charismatic Holmes, turned powerful and influential men into putty, and was once feted as Silicon Valley’s first female billionaire. Mimicking a Steve Jobs ‘look’ by always wearing a black turtle neck sweater and adopting a very deep voice, she set out to revolutionise blood diagnostics, and make a lot of money in the process.

A college dropout at the age of 19, Holmes had no scientific background or any scientific qualifications when she formed Theranos in 2003. Theranos claimed to have developed a machine that could analyse a tiny pinprick of blood, instead of subjecting patients to the painful process of having a number of vials of blood drawn.

This machine, called the Edison, seemingly gave inaccurate readings, when it worked at all. Behind the scenes, Theranos used conventional machines to analyse the blood. Very often, more blood had to be drawn from the patients.

Holmes formed an impressive board of directors of Theranos, including Donald L Lucas, venture capitalist, Channing Robertson, the associate dean of Stanford’s School of Engineering, and George Shultz, former Secretary of the State (now deceased). Schultz introduced Holmes to his friends, including Henry Kissinger. Holmes also managed to attract a qualified, talented and experienced team to Theranos to build on her vision.

Notably, Theranos was not a listed company, and did not have to file audited annual financial statements.

Astonishingly, such were her powers of persuasion that investors handed over hundreds of millions of dollars without insisting on audited financials.

Holmes also managed to sign a deal with Walgreens to deploy the Edison at various locations, to analyse the blood of trusting patients. Theranos settled a lawsuit with Walgreens for over US$ 25 million, according to the book ‘Bad Blood: Secrets and Lies in a Silicon Valley Startup’.

In 2015 an investigative reporter at the Wall Street Journal, John Carreyrou, started writing articles on Theranos. His book, ‘Bad Blood’, was published in 2018. It received the Financial Times and McKinsey and Company Business Book of the Year Award. In the book, Carreyrou claimed that his expose was made possible by “confidential sources who spoke to me at great personal peril throughout 2015 and 2016”.

Tyler Schultz, the grandson of George Schultz, started working for Theranos after graduating from Stanford with a major in biology. He had met Homes through his grandfather in 2011. After only a month Tyler realised that the Edison’s blood test results were misleading, and had failed the quality control procedures.

Carreyrou recounted what Tyler had told him regarding a party at Shultz senior’s home for Holmes, which Kissinger and Robertson attended: “…Elizabeth was in the middle, revelling in the attention. It was as though she were the queen and they were her court, kissing her ring.” [Bad Blood Page 191] Some time later Tyler attempted to discuss his concerns regarding Theranos’s proficiency testing with his grandfather, to no avail. Tyler resigned and later became a whistleblower, thereby incurring the wrath of his family.

Federal prosecutors argued that Holmes intentionally deceived investors into investing in a blood analysis machine that she knew was faulty, and continued deceiving investors even when Theranos was bankrupt. However, it is very difficult proving ‘intent’ in a criminal trial, and the prosecutors failed to prove the charges of intent to defraud the patients.

Holmes’s defence lawyers resorted to the so-called ‘Svengali Defense’, and accused Sunny of abusing Holmes and controlling her. Balwani, who departed from Theranos in 2016, is to be tried separately. The defence lawyers also argued that Holmes had never set out to mislead.

Justice has been served

After the verdict, on January 3, Tyler (@TylerSchultz) tweeted:

This has been a long chapter of my life. I am happy that justice has been served and that this saga is finally in my rearview mirror. Proud of the impact that Erika and I had. Hope to inspire other young professionals to hold their leaders accountable.

Tyler has narrated an audio book called ‘Thicker than Water’. In his audio book he refers to his grandfather and his friends as “former statesmen with no background in medicine”. Schultz said that “my goal was not to bring down Theranos but to help them succeed without putting lives in danger”.

The sentencing hearing, purportedly a complex process, will be scheduled for a later date.

the tale is as much an indictment of the naive stupidity of Silicon Valley “investors” and celebrity boards. This board had Kissinger, Schultz and some Trump Secretary of defence.

How much more simple can due diligence be than:
Company differentiator / disruptor / miracle is a blood test machine with rapid cheap results.
Here’s an idea, let’s run 50 randomized blood samples through the machine and say two major labs and then, shocker : we compare the results.

At a stage this outfit was going on about no-contact blood tests. I kid you not, people swallowed that too.

Carreyrou’s book is a good read. A great piece of investigative journalism. The Theranos issue actually caused a rift in the Shultz family after the grandson told the grandfather it was all a scam. Oupa lost his rag …. and his money. In most of the book you could transpose the words Theranos and Steinhoff, right down to the illustrious board of directors and the expensive motor cars. They conned some very astute people. Balwani must be going tickey tickey sikspens.