The next president needs to win 50% of votes cast, or 113 in parliament if all lawmakers submit their ballots.
By Anusha Ondaatjie, Bloomberg 18 Jul 2022  13:08 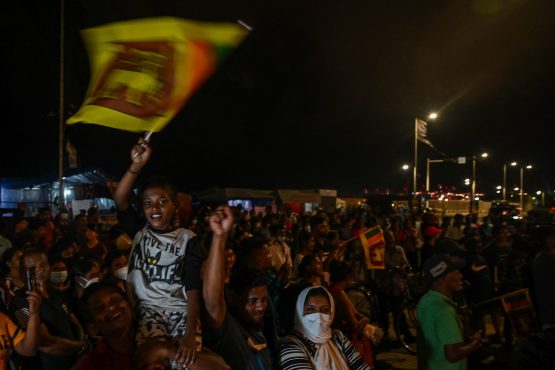 A protest near Presidential secretariat in Colombo on July 17. Image: Arun Sankar/AFP/Getty Images

Sri Lanka will this week elect a new president, who would need the support of both lawmakers and protesters in order to pull the bankrupt country out of its worst economic crisis.

Legislators in the 225-seat parliament will on Tuesday submit nominations for the post, left vacant after President Gotabaya Rajapaksa fled to Singapore and resigned. Voting is due Wednesday, with Acting President Ranil Wickremesinghe among the top contenders for the job, together with the leader of the main opposition, Sajith Premadasa.

The key question is who would appeal to protesters. Deeply unpopular Wickremesinghe, whose whereabouts have been unknown since arsonists set his private home on fire this month, blamed “fascist” elements for escalating tensions and on Monday invoked emergency rule across the island, “in the interest of public security, the protection of public order and the maintenance of supplies and services.”

Imposition of Emergency is an undemocratic draconian act. Peace loving citizens of our motherland have the sacred privilege to exercise their fundamental rights in a democratic society. Long live democracy. https://t.co/chirQ4MBxg

The South Asian nation has witnessed months of protests over soaring prices and fuel shortages. Protesters want Wickremesinghe to resign, with demonstrators occupying his office and attempting to storm parliament last week, before authorities and protest leaders took steps to ease tensions. Last week too, Wickremesinghe had announced emergency rule — giving the army and police sweeping powers to detain and arrest people.

International Monetary Fund Managing Director Kristalina Georgieva told Bloomberg News in an interview on Saturday that talks with Sri Lanka could proceed “quite quickly” as soon as a new government is in place, which could pave the way for a bailout.

In a statement Monday, laying out what he had done since being appointed prime minister by Rajapaksa in May, Wickremesinghe said he had led the country close to a conclusion in negotiations with the IMF, while “discussions for assistance” with foreign countries were also progressing.

He also called on political parties to come together and form an all-party government which would allow the country to recover from the economic crisis.

The next president needs to win 50% of votes cast, or 113 in parliament if all lawmakers submit their ballots.