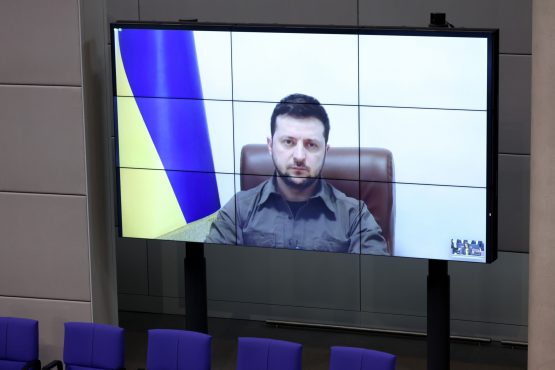 Some European Union governments are pushing for the bloc to quickly impose new sanctions in response to multiple reports that Russian troops executed unarmed civilians in Ukrainian towns, according to diplomats familiar with the discussions.

The European Commission was already honing measures that would mostly focus on closing loopholes, strengthening existing actions — such as export controls on technology goods and fully sanctioning banks already cut off from the SWIFT global payments system — and expanding the list of sanctioned individuals.

Some EU nations argue there is now a trigger for the new penalties to be put in place with speed, with Ukrainian officials reporting evidence of war crimes committed by Russian troops in northern areas, according to a diplomat familiar with the discussions.

There is not yet consensus on all the details for a new package, or when to implement it, even as the bloc’s executive arm seeks in the meantime to put forward a set of corrective measures as early as this week. A small number of member states, including Germany, are opposed to sanctioning Russia’s energy sector, its maritime trade and other key industries, and EU sanctions require unanimous support.The question for EU members is what actions would spur a fresh and fuller set of sanctions. Some continue to argue such measures should only be explored if Russia were to use chemical weapons or capture a major city, three diplomats said, asking not to be identified as the discussions are private.Other states say the reported events in places like Bucha, a town on the outskirts of Kyiv, are enough to warrant action. And one of the diplomats said even the fresh measures on the table were not enough given the extent of the potential war crimes.

German Foreign Minister Annalena Baerbock said in a Twitter post Sunday that anyone responsible for war crimes must be held accountable and sanctions would be tightened against Russia.Ukraine has accused Russian soldiers of killing unarmed civilians, with officials saying they found hundreds of bodies in Bucha after Russian troops left. Mykhailo Podolyak, an adviser to President Volodymyr Zelenskiy, posted several photos on Twitter of dead people, some with their hands tied behind their backs. Moscow hasn’t commented on the accusation so far. The Kremlin has said previously it was only targeting the military and key infrastructure.It comes as Russia shifts tactics in the war, redeploying troops away from the north after weeks of failure to make ground. Instead its campaign is focusing on areas in the east, including the Donetsk and Luhansk regions of Donbas, and Mariupol, a port city that has already been under siege for weeks.

“We are still collecting bodies, uncovering graves, but the count is already in hundreds,” he told the UK’s Times Radio in an interview.

The US last month made a formal determination that Russian troops had committed war crimes. At the time Secretary of State Antony Blinken said the US had seen “credible reports of indiscriminate attacks and attacks deliberately targeting civilians, as well as other atrocities.” President Joe Biden has said he considers Vladimir Putin a war criminal.

Increasingly frustrated with the stance of their counterparts, several EU countries, including Lithuania and Poland, have announced they will unilaterally stop importing Russian energy, while Estonia has put forward a proposal to withhold and freeze a share of Russia’s energy revenue that it says could be an initial compromise.

One of the diplomats said the hope was the unilateral moves would lead to an agreement among all member states to do more in order to avoid risking damage to the EU’s united front.

Convictions will take time, most in absentia, but they will happen. It will also be test for the free thinking democratic, non-autocratic world. How utterly short sighted of Putin … what did he expect would be the world wide reaction? Applause?

We tend to wonder why intelligent Russian citizens fall for the pro-Russian propeganda. We never pause to reflect on the possibility that we have fallen for the pro-Western propeganda. Individualistic and independent thought is a scarce and unpopular commodity. People prefer to stay in the comfort zone of the popular narrative, no matter how simplistic and naive it may be.

I think it would be rather hard for a single “pro-western”propaganda message to be infiltrated into all these very diverse media sources.

Oh! Intelligent Russian citizens are fleeing the country in their droves. https://www.bbc.com/news/world-europe-60697763

“Free speech and reporting may be another casualty of the Russian invasion of Ukraine, and President Putin signed a law making the airing of what the government calls false information about the armed forces illegal. Journalists could be jailed for up to 15 years. Russian officials assert it’s false to call their military operations in Ukraine a war or an invasion. Several Western news outlets say they’ve suspended reporting from Russia while they assess the law and the safety of their employees.” npr.org

I note that you have 4 Russian bot upticks.

Sensei lost all common sense, desperately trying to come across as having a very clever, alternative view, which is nothing more than an unfounded conspiracy theory.
Another delusional narcissist, imprisoned with ASB, Attention Seeking Behaviour.

Such a pity tragedy is so applauded.

I will not comment on this any longer, neither will I up-vote nor down-vote any of Sensei’s comments, it is beyond comprehension but so be it.

“The Minsk Agreement hasn’t been applied by both sides,” Stegner explained, “and it just doesn’t make any sense to think that forcing up the military possibilities would make it better. Rather, I think it’s the hour of diplomacy.”

“By contrast, most American politicians and corporate media have fallen in line with a one-sided narrative that paints Russia as the aggressor in Ukraine, and support sending more and more weapons to Ukrainian government forces. After decades of U.S. military disasters based on such one-sided narratives, Americans should know better by now. But what is it that our leaders and the corporate media are not telling us this time?

The most critical events that have been airbrushed out of the West’s political narrative are the violation of agreements Western leaders made at the end of the Cold War not to expand NATO into Eastern Europe, and the U.S.-backed coup in Ukraine in February 2014.

Western mainstream media accounts date the crisis in Ukraine back to Russia’s 2014 reintegration of Crimea, and the decision by ethnic Russians in Eastern Ukraine to secede from Ukraine as the Luhansk and Donetsk People’s Republics.

But these were not unprovoked actions. They were responses to the U.S.-backed coup, in which an armed mob led by the neo-Nazi Right Sector militia stormed the Ukrainian parliament, forcing the elected President Yanukovich and members of his party to flee for their lives. After the events of January 6, 2021, in Washington, that should now be easier for Americans to understand.” – https://www.indepthnews.net/index.php/opinion/5053-america-is-reaping-what-it-sowed-in-ukraine

Methinks thou dost protest too much ….

I have nothing to gain or to lose from this debate. I have zero vested interests. My puny little ego is immune to the opinions of people whose opinions are based on emotions and feelings. That is beyond boring. I like to share ideas and information. Please share your ideas and your information. I am not interested in your feelings my friend.

“Do you know that one of the great problems of our age is that we are governed by people who care more about feelings than they do about thoughts and ideas.” – Margaret Thatcher

Bottom line is in a referendum with 90% turnout 91% of Ukrainians voted for independence from Mother Russia.

The half million Russians in Ukraine are free to escape to Russia. There is a lot of extra space on retreating Russian military vehicles, those vehicles must just continue and not stop in the territories Putin has all along intended to keep. If they stop, the sanctions will not stop and neither will the Ukrainian defence of its territory.

I look forward to Russia being relegated back to its rightful place among nations. Long after sanctions go, Putin will be short of oil coal gas wheat buyers at market rates. China and India will buy, but the 30% discount of Urals oil to Brent is indicative.

Also please stop the narrative of the West versus Putin. It is pretty much the rest of the world excluding China India and North Korea that refuse to denounce Putin.

Ukrainian neo Nazis? Oh come on. Only Russian propaganda use this description. Yanukovich fled because he applied excessive force and killings against a peaceful protest. The events became known as the Revolution of Dignity. Russia then used that moment of weakness in Ukraine to annex Crimea and orchestrate a war in Donbas.

If Ukraine is run by Neo Nazis, then you can just as well say that the US is run by KKK…