Europe’s coal heartland is the hottest market for green power 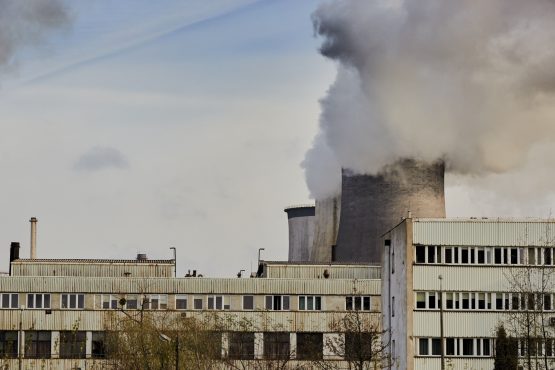 As Europe prepares a multi-billion-dollar blitz to cut greenhouse gas emissions, a race is on to cash in on the green transformation of the nation with the region’s most polluting power plant.

Poland, which currently relies on coal for more than 70% of its electricity generation, is stepping up efforts to replace the dirty fuel with renewable energy. As the country finalises its 2040 energy policy, some of the world’s biggest players in renewables are seeking to capture a share of the market.

“Poland is busier than any market I’ve seen since I’ve been working in renewables,” said Gary Bills, regional director for Europe, Middle East and Africa at energy consultants K2 Management. “There’s massive interest in on and offshore wind.”

It marks a drastic turnaround for Poland’s ruling Law & Justice party, which went from a blocker of wind farms to booster, amid the plummeting cost of renewables and a public backlash against some of the dirtiest air on the continent. The government’s shift also comes as the European Commission proposes linking its 750 billion-euro ($841 billion) economic stimulus programme to the bloc’s climate goals.

Poland will increase its renewable power capacity by 65% from 2019 to 2024, mostly from onshore wind farms, according to International Energy Agency estimates. The country’s first offshore wind turbines, in the Baltic Sea, are expected to start producing power by 2025. 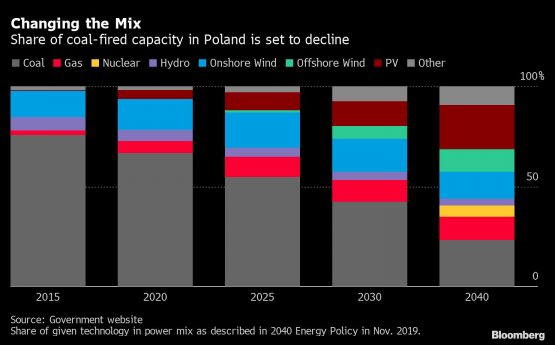 “We will never manage, as Poland, to meet the Paris commitment based on onshore renewables,” said Marek Roszak, DNV GL’s head of energy in Poland and Central Eastern Europe, referring to the 2015 global climate pact. “We will need to push more offshore.”

Poland’s Climate Ministry is treating offshore projects as a priority, it said by email.

The conditions in Poland’s Baltic Sea are ideal for the giant turbines increasingly common off the coasts of the UK, Germany and the Netherlands. There’s strong wind resources, shallow waters and the sites are near to shore, Roszak said. Poland’s government estimates its offshore wind potential will be about 10 gigawatts of capacity, or about a quarter of the nation’s current total available generation. Industry groups think it could be nearly three times higher.

That could unleash billions of dollars in investment over the coming years. PGE, the country’s biggest utility, estimates that it will cost about 12 billion zloty ($3 billion) to build every gigawatt of offshore wind capacity.

Developers have taken note. Orsted, Equinor ASA, RWE and Iberdrola have each sought partnerships with state-owned or local companies that already hold the few licenses to develop offshore wind.

Investors are now awaiting the passage of a key law that introduces state subsidies for building the first offshore farms. According to Polenergia SA, which partnered with Norway’s Equinor, well-designed draft regulations are something that drew investors.

“However, this means that any serious delay or disruption in the legislative process may lead to a decline in the interest and trust of those investors, making the development of the project impossible,” Polenergia chief executive officer Michal Michalski said by email.

Renewable industry companies also want the government to open up the sea for more investments under a sector-wide agreement, which is set to happen soon.

Poland may also be a key piece of a bigger puzzle. With the growing capacity of offshore wind farms in nearby Danish, German and Lithuanian waters, the country could be the linchpin to connect green power across the Baltic Sea.

It would be an interesting exercise to see how many politicians and activists promoting the environmental “climate change” challenge are financially vested in new “renewables” industry participants. I am not totally convinced about the carbon footprint theory and its effect on climate. No arguments about pollution and what that is doing to the air we breathe, to the world’s rivers, oceans and the animal life affected, but the carbon emissions “problem” I suspect is being wrongly conflated with pollution problem. That is a taxable side show and a conference industry with Governments and NGOs as beneficiaries i.m.o. But I’m no expert and I don’t know which “experts” to believe on this one. Following the money however will lead to the truth in the long run.