To do the same with its vessel stranded near the US capital.
By Augusta Saraiva and Cindy Wang, Bloomberg 18 Mar 2022  06:37 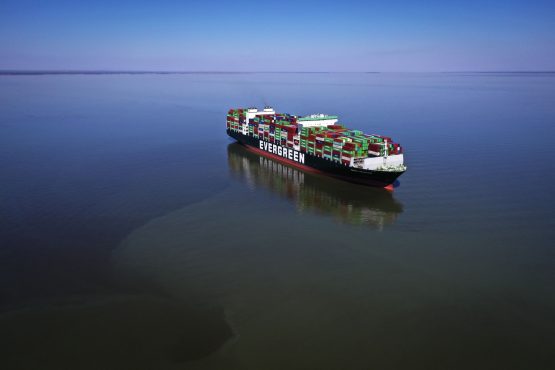 Evergreen Marine Corp. has hired the company that freed the giant container ship Ever Given last year when it ran aground for almost a week, disrupting global trade for months, to do the same with its vessel stranded near the US capital.

The Taiwanese carrier has enlisted Donjon-Smit LLC to free the Ever Forward, the vessel that’s been stranded in the Chesapeake Bay near Baltimore since Sunday night, Evergreen said in a emailed statement Friday. The salvor is a joint venture between Donjon Marine Co. and Smit Salvage Americas Inc., a subsidiary of the Netherlands-based company responsible for ending the six-day saga at the Suez Canal last March. The firm was also hired to help out with the vessel that caught fire carrying roughly 4 000 luxury cars in Europe last month.

The Donjon-Smit team is working alongside naval architects, divers and the US Coast Guard to free the ship, Maryland Port Administration Executive Director William P. Doyle said Thursday on Twitter. There’s been no fuel leakage, injuries or apparent damage to the vessel, and trade is moving into and out of Baltimore uninterrupted, Doyle added.

Experts at the scene are assessing the vessel’s grounding condition, the weight of the cargo on board and the tidal range at its location as part of their efforts to come up with a refloating plan, the Evergreen statement said.

The Hong Kong-flagged ship got stranded after departing the Port of Baltimore’s Seagirt Marine Terminal on Sunday night and hasn’t moved since, according to mapping data compiled by Bloomberg. The 334-meter (1 096-foot) vessel is now scheduled to call the Virginia International Gateway terminal on March 23.

Nathan Strang, director of ocean trade-lane management at logistics firm Flexport Inc., said the schedule is probably “optimistic,” because the Ever Forward is “stuck pretty good” compared to its sister ship, which only had its bow stuck.

However, the vessel is not currently blocking traffic and may cause “annoyance and frustration,” but is unlikely to disrupt global trade in the same way the Ever Given did a year ago, Strang said.

Evergreen shares declined as much as 3.1% in Taipei trading as of 11:10am Friday. The shares have declined more than 11% this week.

Donjon-Smit has not responded to multiple requests for comment.