Asian stocks were mixed Tuesday and Treasuries weakened as traders weighed a jump in crude oil prices following the collapse of a deal among OPEC+ leaders to boost output next month. A gauge of the dollar dipped.

Japanese stocks made modest gains while those in Hong Kong and China slipped. Lingering concerns about China’s cybersecurity crackdown are shadowing the nation’s stock market. One of the most high-profile probes is into ride-hailing giant Didi Global Inc., which only just listed in the US European and S&P 500 equity futures fluctuated and Nasdaq 100 contracts fell.

OPEC+ was plunged into crisis as a worsening fight between Saudi Arabia and the United Arab Emirates blocked an oil-supply increase. The breakdown of talks has sent crude climbing toward $80 a barrel. But it also raises the risk of a price war if the conflict escalates.

Australian bond yields rose as the central bank announced a slower pace of asset purchases, though the statement reiterated that interest rates are unlikely to rise before 2024. New Zealand’s currency outperformed major peers on speculation that an interest-rate hike could come this year. 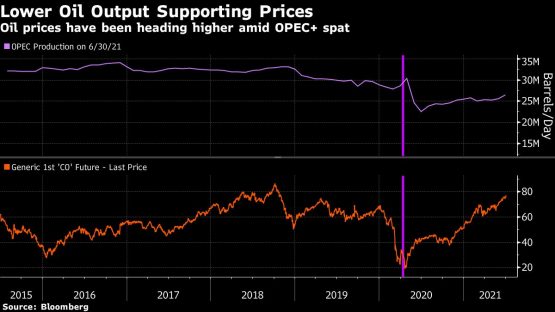 Higher energy costs could fan the inflationary pressures that are strengthening the case for the Federal Reserve to start withdrawing emergency stimulus in the months ahead. The latest US central bank minutes due Wednesday may provide further context on its hawkish pivot last month.

The risk of oil at $100 a barrel “is so correlated with short-run inflation that it will make the market very, very edgy, and we know that the Federal Reserve is both watching the economic data but also markets,” Alan Higgins, chief investment officer at Coutts & Co., said on Bloomberg Television.

Elsewhere, the pound extended an advance after the UK announced plans to end social distancing and capacity limits at venues in England from July 19, saying that people must learn to live with coronavirus.

Gold continued its positive July, edging toward a fifth daily gain. US stocks and Treasury markets were closed Monday for the Independence Day holiday.