SA's business leaders are more pessimistic than their global peers regarding their organisations’ prospects. Image: Shutterstock

Global CEOs are showing record levels of pessimism in the world economy, with 53% predicting a decline in the rate of economic growth in 2020.

This is according to the PricewaterhouseCoopers (PwC) 23rd Annual Global CEO Survey. Launched this week at the World Economic Forum in Davos, Switzerland, the 2020 survey questioned almost 1 600 CEOs from 83 countries.

From Africa to the Asia-Pacific region, Central and Eastern Europe, Latin America (including Mexico), the Middle East, North America and Western Europe, they share the sentiment that global economic growth will slow in 2020.

The survey also reveals that in the past two years, the percentage of global CEOs who believe that gross domestic product (GDP) growth will decline has risen, their negative outlook increasing tenfold from 5% to 53%. This is up from 29% in 2019 and just 5% in 2018 – making it the highest level of pessimism since PwC started the survey in 2012.

The biggest threat clouding the CEOs’ outlook for 2020 is caused mainly by over-regulation globally, but concerns are also rising over uncertain economic growth, as well as trade conflicts, climate change and cyber threats.

SA CEOs are not spared of this global uncertainty about where the road will lead them in 2020. In fact, they have taken a U-turn from their record optimism in 2017 to record pessimism in 2020.

They plan to drive corporate growth and profitability mainly through operational efficiencies, organic growth and by launching new products or services.

In comparison to their global counterparts, CEOs in SA are more pessimistic regarding their organisations’ growth prospects in 2020. Only 14% are ‘very confident’ about their 12-month revenue prospects compared to 18% in 2019.

Commenting on the survey results at the African Pride Hotel in Melrose Arch in Johannesburg on Wednesday, Dion Shango, CEO of PwC Africa, said that no matter where the CEOs look, or where they are looking from, the path is filled with anxiety.

Shango said the negative outlook is characterised by a lack of business confidence and a decline in business activity overall as well as the “the current state of the economy”, while “socio-political uncertainty is dampening business expectations”.

When the CEOs were asked how concerned they were about each potential economic, policy, social, environmental and business threats to their organisation’s growth prospects, they showed ‘extreme concern’. 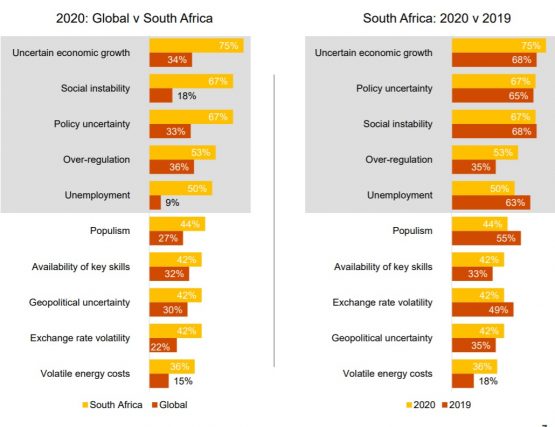 Shango is however optimistic that despite the current uncertainty, there are still opportunities for SA CEOs to pursue.

“Faced with uncertainty, business leaders need to act decisively and quickly. Instead of looking inward, they should broaden their field of vision and strive to create a broader range of options to pursue,” Shango says.

He says business leaders could look at upskilling, development and training of their employees.

“CEOs also need to look at how they can structure and further enhance their operational efficiencies,” he adds. “Making decisions in a way that is more resilient will enable organisations to thrive in the full spectrum of uncertain outcomes.”

The SAs CEOs’ concern over uncertain economic growth, social instability and policy, uncertainty is extremely high in comparison with those of global CEOs.