And investors mulled a vaguely-worded statement from the troubled developer about an interest payment.
By Bloomberg News 22 Sep 2021  09:09 Global markets were offered a reprieve from Evergrande contagion fears on Wednesday as China’s central bank boosted liquidity and investors mulled a vaguely-worded statement from the troubled developer about an interest payment.

The CSI 300 Index pared opening losses of as much as 1.9% after an Evergrande unit said a coupon payment had been resolved with bondholders in private negotiations. An injection of short-term cash by the People’s Bank of China lent support to fragile sentiment, helping steady risk assets beyond the world’s second-largest economy. 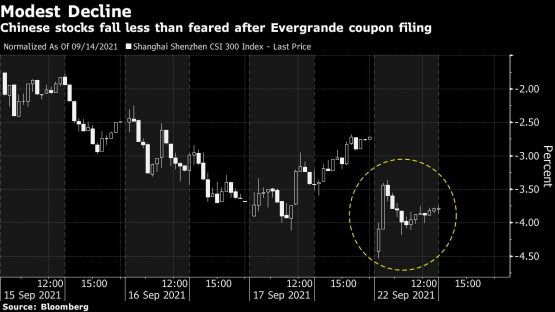 “I think we may be seeing a temporary reprieve with some repayments aiding to provide a better-than-expected situation than many would expect,” said Jun Rong Yeap, a market strategist at IG Asia Pte. “This also comes along with some injection of short-term funds by the PBOC, which suggests that they are monitoring the situation closely and are ready to step in if the economy comes under risks.”

US equity futures reversed early losses to edge higher in Asia trading, while the yen — a traditional haven for investors — retreated. Chinese government bonds rallied, with the yield on 10-year notes on track to hit the lowest in about two weeks.

Still, analysts were left grasping for details after the Evergrande unit didn’t specify how much interest it would pay or when. Some were speculating the company struck a deal with noteholders to postpone interest payments without having to label the move a default.

Global investors had been on tenterhooks this week awaiting the reaction of Chinese traders to concerns about Asia’s biggest junk bond issuer and a crackdown on the country’s real-estate sector. Some $6.7 billion was wiped off the value of Hong Kong’s four top property giants on Monday amid a worldwide risk asset selloff that ensnared even stocks with less tangible links to China.

Investors are also closely watching how Beijing plans to deal with the situation surrounding the world’s most-indebted developer. The China Business News, owned by the state-run Shanghai Media Group, urged authorities to manage the pace of tackling risks in the property sector and set up a “fire wall” between the industry and the financial system, in a Tuesday editorial.

Evergrande has about 2 trillion yuan ($309 billion) in assets — equivalent to 2% of China’s gross domestic product, according to Goldman Sachs Group Inc. calculations.

The company’s onshore property unit will make an interest payment for a yuan bond maturing in 2025 on Thursday, the exchange filing said. Meanwhile, China’s central bank injected 120 billion yuan into the banking system through reverse repurchase agreements, exceeding the 30 billion yuan of maturities on Wednesday.