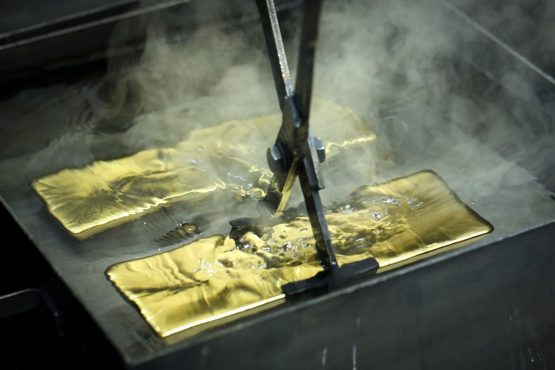 Gold slid below $1,800 an ounce to the lowest since July as positive vaccine news and a clearer political picture continued to undermine the haven.

Bullion fell steeply in a repeat of losses seen Monday, when news of AstraZeneca Plc’s effective vaccine and positive US economic data hit demand. The decline accelerated after gold moved below its 200-day moving average. Prices are heading for a third weekly drop as investors swap into risk assets looking to profit from the eventual economic recovery.

Applications for US state jobless benefits unexpectedly rose in the first back-to-back increase since July, a report Wednesday showed, while Astra’s shot looks like it is heading for an additional global trial as the drugmaker tries to clear up uncertainty surrounding the initial results.

President Donald Trump said he will relinquish power if the Electoral College affirms Democrat Joe Biden’s win, a sign the transfer to the new administration will be peaceful. Still he signaled he may never formally concede defeat, and may skip the Democrat’s inauguration. Money continued to exit gold exchange-traded funds, which are now headed for their first monthly outflow this year. The funds have been a crucial support pillar for bullion in 2020, so their current erosion has significant implications for the price.

“Gold has moved into the next ‘down-leg’ of its correction phase,” according to United Overseas Bank Ltd. market strategist Quek Ser Leang. A break of the support zone of between $1,760 and $1,780 would open up the way for further weakness toward the $1,600s, he said.

When Gold was trading @ $2000, I predicted that a Biden win would drop it to $1800 whilst a Trump win would see it go to $3000! Gold is the free worlds political and economic barometer… a safe haven in dangerous times. The fact that it has dropped is, in my opinion, a good thing! It means that calm, reasonable, decent times are ahead…at least for another 4 years !