Hopson Development Holdings Ltd.’s shares tumbled the most since 2009 after the builder — seen as one of the safer names among China’s property companies — said PricewaterhouseCoopers has resigned as its auditor.

The stock sank as much as 31% in Hong Kong, and its dollar bonds were poised for record declines. A Bloomberg Intelligence index of real-estate stocks fell a further 2%, setting the stage for its biggest weekly drop since early November. China’s high-yield dollar bonds slipped at least three cents on the dollar Friday morning as concerns about Hopson’s financial health weighed on developers’ notes and traders moved to pare risk exposure.

Meanwhile, the Financial Times reported that U.S. investment firm Oaktree Capital Group LLC has a secured loan to ‘Venice,’ a tourism resort on the Yellow Sea Coast developed by China Evergrande Group in mainland China. That came as authorities are considering a proposal to break up the embattled builder by selling the bulk of its assets, people familiar with the matter told Bloomberg. 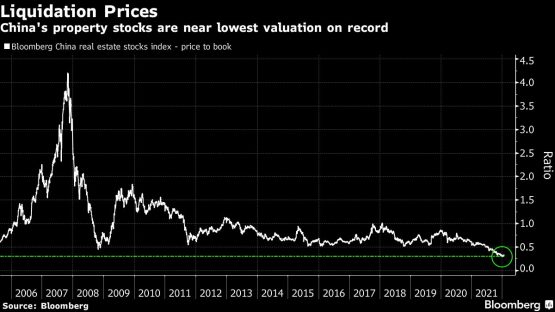 The company is interested in commercial-property assets in Tier 1 and 2 cities, Vice Chair Adriel Chan said in an interview with Bloomberg Television. Oaktree Capital has a secured loan to ‘Venice,’ a tourism resort on the Yellow Sea Coast developed by Evergrande in mainland China, the Financial Times reports, citing a letter to investors and an unidentified person close to the matter. Oaktree Capital’s loan allows it to take control of the land in case there’s a default of Evergrande, according to the report.

The asset management firm has also moved to seize a plot in Hong Kong after Evergrande defaulted on a loan against which Oaktree had security, the FT previously reported, citing people familiar with the matter.

Country Garden Holdings Co. has repaid the outstanding senior notes in full with accrued interest, the Chinese developer said in an exchange filing. The notes will be canceled and delisted from Singapore Exchange Securities Trading.

China’s corporate-bond default rate is set to increase this year due to nonpayments at privately owned developers, predicts Fitch Ratings.

It also forecasts that defaults on capital-market debt from the state sector, including LGFVs, are likely to remain at a similar or slightly higher level than last year.

The deal may be completed after the Chinese New Year holiday, according to the report, which didn’t give a timetable or name any buyers.

S&P Global Ratings indicated it may be ready to lower Logan Group Co.’s credit rating, citing “previously unreported debt guarantees” as it put its grades on watch for downgrade.

“If the previously unreported debt is confirmed, Logan’s credit profile and liquidity may be hit,” S&P said, adding more information is required to analyze the extent of such debt.