The S&P 500 Index on Wednesday posted its best first-day reaction to a presidential inauguration since at least 1937 with a 1.4% jump on prospects of an around $2 trillion in stimulus spending. Global stocks, meanwhile, hit fresh all-time highs.

Biden’s formal transition into the White House has cemented investors’ faith in companies allied to his policies, while those that don’t meet his priorities are losing out. Stocks tied to clean energy rose, continuing gains they have made since Biden won the election. Defense equipment makers and prison operators — sectors that did well under Donald Trump — dropped. 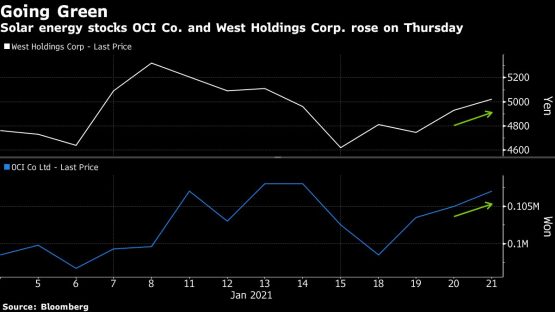 Some clean energy stocks in South Korea and Japan rose on Thursday as Biden signed sweeping actions to combat climate change just hours after taking office. He is moving to bring the US back into the Paris climate accord and has imposed a moratorium on oil leasing in some parts of the Arctic. Shares of US private prison operators, long a target of Democrats, tumbled. CoreCivic Inc. declined 7.8% and Geo Group Inc. fell 4.1%. Shares of both companies dropped the most since December 22. Asian defense stocks dropped on expectations that Biden’s less confrontational policies would dampen global geopolitical risks and the need to ramp up spending on the sector. Japanese rifle maker Howa Machinery Ltd. fell 7.8% while Australian defense shipbuilder Austal Ltd., which makes around 77% of its revenue from the US, declined 2.7%.