How Spotify’s competition in Africa won the hearts of listeners

Audiomack won the hearts of many Africans by allowing those without a premium subscription to download songs and listen offline.
By Tope Alake and Thomas Pfeiffer, Bloomberg 10 May 2021  07:45 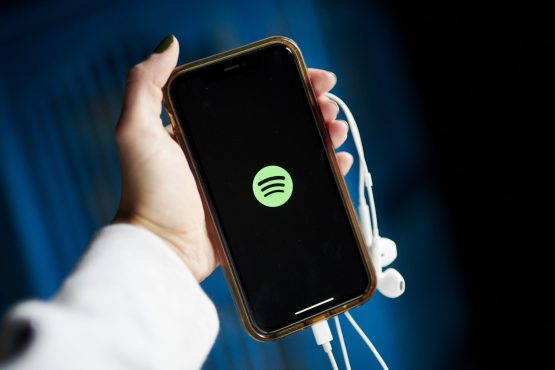 A company that’s barely known in the US and Europe is the most successful online music platform in Africa — making it target number one in Spotify’s campaign to dominate the continent’s streaming market.

Audiomack Inc. won the hearts of many Africans by allowing those without a premium subscription to download songs and listen offline. The feature lets customers use minimal wireless data, a big draw as mobile signals on the continent are often patchier, and costlier, than in Europe or the US.

It’s also done a lot to keep listeners engaged by cultivating breakthrough African musicians and helping users discover them. New artists get a path to visibility as they can upload songs even if they don’t have a deal with a music label or distributor. Audiomack managers pick out emerging artists four times a year across all genres and provides them with specialised marketing, editorial programs, social promotion and playlisting, and it showcases them at events.

Nigerian Stanley Omah Didia, who performs as Omah Lay, was the first African artist selected for Audiomack’s UpNow program to spotlight emerging talent in 2020. His debut EP, “Get Layd,” was the first body of work by an African musician to surpass 100 million streams on Audiomack. Lay signed with Warner Music later that year.

“Our goal is to bridge the gap between emerging artists and fans looking to discover them,” David Ponte, co-founder and chief marketing officer, said in an interview from Audiomack’s New York headquarters. The offer of downloads on the freemium service “is a huge advantage to a lot of people in Africa.”

Ponte says these three offers are “primary competitive advantages” for Audiomack, which was established in New York nine years ago and has more active users than rivals in Africa’s biggest music markets.

Stockholm-based Spotify Technology SA first launched in South Africa and a few north African countries in 2018, and has been trying to make up for lost time by expanding to a further 39 territories since February. After 15 years of existence, the company is still posting annual losses due to the costly royalties it pays to big music companies. It once had plans to let musicians bypass the big labels and self publish, but abandoned the idea.

Its free service, like Audiomack’s, is also supported by ads, but doesn’t allow downloads — that’s only available to its paying users. 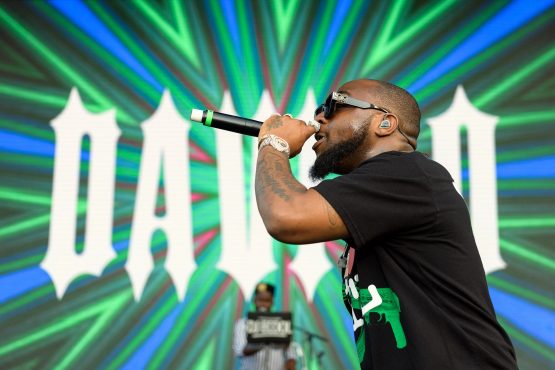 Spotify says its prices reflect African consumers’ purchasing power. Rather than just targeting the customers of rival platforms, the company sees its biggest growth opportunity in convincing the millions of Africans who download songs illegally to switch to legal streaming. It’s betting that plenty of local musicians will use the service to access its enormous listener base.

“We are ramping up quickly, evolving our content and adjusting our product as we learn about what makes the most sense on a hyper local level,” Spotify CEO Daniel Ek said last week on an earnings call. Spokespeople for the company declined to comment for this article.

The market is getting more competitive as local streaming services and international players build their presence, leading to an intense fight for subscribers. It’s an enormous opportunity — Africa has a population of over 1 billion and only 26% of those people had access to the internet at the end of 2019, according to the GSMA. 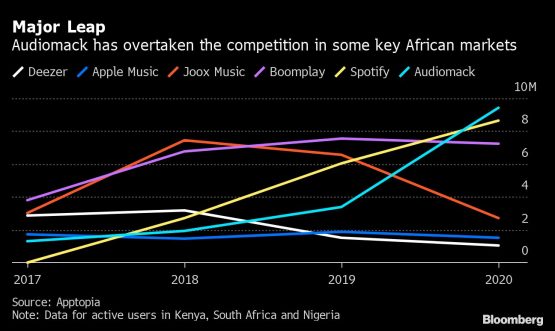 Audiomack’s rise has been fueled partly by a surging user base in Nigeria, the continent’s richest and most populous nation, according to data from the analytics website Apptopia. It charges 475 naira ($1.16) per month for a premium package.

But key to its success is the ad-funded “freemium” model with downloadable songs that’s popular in a country where more half the population earn less than $2 a day. To download on Spotify, a user in Nigeria would have to pay around 900 naira a month. Audiomack has also drawn users by offering live performances of artists such as David Adedeji Adeleke, known as Davido, one of the nation’s biggest acts.

Spotify launched in Nigeria in February, and by the end of April it had about 87 000 monthly active users, compared with Audiomack’s 1.2 million.

To stay ahead of rivals, Audiomack has partnered with telecommunications company MTN Nigeria to offer its users cheaper data to stream music in its app. Bizzle Osikoya, founder of Lagos-based music publisher and distributor The Plug Entertainment, said the deal could give Audiomack an edge.

“Here, a lot of people can’t afford to pay for the streaming services,” he said. “That is why people are shifting toward Audiomack, where you can download for free and artists make money through the ads on their app.” 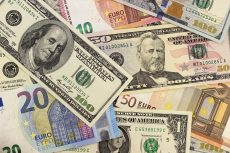