Investors are about to get a snapshot of any price pressures building across the developing world — the fallout of the unprecedented stimulus that’s been unleashed to revive the global economy.

Heavyweights including Brazil, China and India will report inflation data this week against a backdrop of quickening growth that’s being fueled by months of easy money and fiscal largess. Citigroup Inc.’s inflation-surprise index for emerging markets spiked last month to its highest since 2008, a sign that investors may be underestimating the scale of the resurgence. 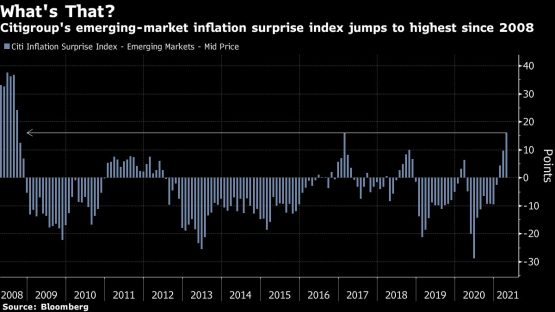 Long the scourge of debt holders and a threat to currency stability, accelerating inflation has already forced policy makers in Brazil and Russia to raise borrowing costs. The Czech central bank last week signaled it could follow suit in mid-year, while Turkey’s monetary authority has pledged to keep rates elevated until there is a significant slowdown in price gains.

“Inflation has reared its head as a key market narrative once again,” said Emily Weis, a Boston-based macro strategist at State Street Global Markets. “This is partly driven by concerns around extreme monetary accommodation, fiscal largess and their combined impact on the green shoots of recovery.”

The prospect of tighter monetary conditions in emerging markets still hasn’t changed the overall calculus for many investors, with behemoths including Pacific Investment Management Co. and BlackRock Inc. focusing on the growth story instead. Developing-nation inflation remains near a record low, with the economic rebound making assets look “increasingly interesting,” according to Dan Ivascyn, Pimco’s group chief investment officer in Newport Beach, California.

Yet there’s a growing sense that the forces behind the recovery will eventually feed through to higher prices if left unchecked. One harbinger could be the rally in commodities, with a key index of raw materials this month jumping to a five-year high.

“If the stimulus continues, at some point it will become inflationary,” said Sanjiv Bhatia, the chief investment officer at Pembroke Emerging Markets in London. “At some point, we believe it will become a problem.”

For now, assurances from the Federal Reserve that inflation in the US is unlikely to get out of control have supported the bulls. The Fed appears in no rush to raise interest rates, a move that would siphon capital out of emerging economies currently enjoying the windfall from US stimulus.

That major central banks currently view inflation as transitory should boost developing-nation currencies as a whole, according to Henrik Gullberg, a London-based macro strategist at Coex Partners Ltd.

MSCI Inc.’s emerging-market currency index has climbed to a record high, while the benchmark equity gauge just posted its biggest two-day rally in almost two weeks amid a rally in energy and technology shares. On Friday, risk assets got further support when US job growth data significantly undershot forecasts.

“On the one hand, the valuations of growth stocks look meaningfully less demanding after recent underperformance coupled with earnings upgrades,” said Kate Moore, the head of thematic strategy at BlackRock in New York. “On the other, rising inflationary pressures from the broad economic restart and low inventories should be supportive of cyclicals and commodity producers.”