Inside the week of Boris Johnson’s downfall Johnson’s personal rivalry with Michael Gove was forged at Oxford in the 1980s and played out as they rose through the ranks at Westminster. Now they were fighting over the fate of the government.

That morning Gove had urged Johnson to accept that a slew of resignations prompted by yet another scandal meant he had to step down. Expecting the prime minister was calling to concede defeat a few hours later, Gove asked if he was resigning. 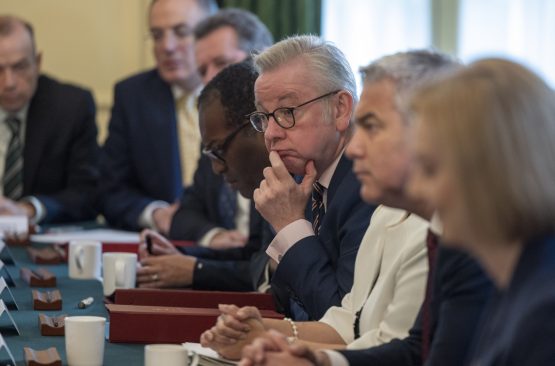 “No, Mikey mate, I’m afraid you are,” Johnson told him, according to people familiar with the exchange. “I’m going to have to ask you to leave the government.”

But even as he took his revenge on his nemesis, Johnson was starting to accept that he would have to leave No. 10.

The populist and chaotic leader was a hero for millions of Brexit voters but he ultimately succumbed to a deluge of scandals of his own creation as his most senior ministers turned on him.

Gove was often at the center of the drama during a breathless and at times surreal week. But the man that Johnson’s inner circle blame for his downfall is Rishi Sunak, the former chancellor, who triggered that final, frantic act that ultimately forced the prime minister to quit.

This account of how the Johnson administration unraveled is based on conversations with senior members of his inner circle, cabinet ministers, political advisers, civil servants and Tory MPs who were present at the key moments and spoke to Bloomberg News on condition of anonymity.

Johnson had spent last weekend largely ignoring the latest scandal raging around him.

There was another slew of allegations in the newspapers, this time related to what Johnson had known about the claims of sexual harassment against an MP who the prime minister had promoted to a senior party post.

But Johnson had grown accustomed to riding out controversy, from his efforts in November to extricate an ally who breached lobbying rules, to the lockdown parties, the investigation into whether he misled Parliament and the resignation of his own ethics adviser.

His judgment, and that of his No. 10 team, was that revelations relating to his former chief whip Chris Pincher, damaging and unseemly though they were, did not pose an existential threat. So on Sunday evening, Johnson headed next door to Sunak’s flat in No. 11 Downing Street for one of their regular weekend dinners.

Johnson’s team had been wary of a potential leadership challenge from Sunak for months and suspected that he would already have moved against the prime minister if he hadn’t been fined over lockdown parties himself.

That night was businesslike, focussed on plans for a new economic strategy and a joint speech. Sunak briefly mentioned his unease at the handling of the Pincher situation, but people close to both men said the meeting was good-natured and there was no hint of the coming storm.

Elsewhere in London though, Health Secretary Sajid Javid was discussing his own concerns about the Pincher case with his own advisers and starting to think he might decide to resign.

No. 10 remained bullish throughout Monday despite the growing furor as Javid watched and waited.

But there were ashen faces around the Cabinet table on Tuesday morning as ministers gathered to discuss Sunak’s plans for tackling rampant inflation. Johnson uber-loyalist Nadine Dorries told the room that the “dogs of hell” would be unleashed if Johnson was removed. One Cabinet minister who spoke to Bloomberg that day warned that Johnson might be in real trouble. He had had an unspoken contract with the Conservative Party since surviving a confidence vote among his own MPs in early June, the minister said: he could remain in place only if the scandals stopped.

That compact had lasted barely a month.

Around 5 p.m., at a meeting in the prime minister’s office in Parliament, Javid told Johnson he was resigning. Johnson felt the annnouncement an hour later could be weathered by appointing a strong replacement.

But nine minutes after Javid published his resignation, Sunak also quit. And this blow came without warning.

Suddenly, Johnson was facing a rout. As the prime minister rushed to replace two key ministers, a wave of more junior officials announced that they too were abandoning his government.

Nadhim Zahawi and Steve Barclay were recruited late on Tuesday to solve the most immediate problem and Johnson’s advisers believed that both men were determined to take their jobs seriously. They understood that they had buy-in from Zahawi, the chancellor, for a new tax-cutting agenda to be announced imminently, though a person close to Zahawi says he made no such commitment.

All the same, as Johnson and his advisers surveyed the damage on Wednesday morning, they could tell that the situation was critical.

As the old sparring partners tussled over the fate of the government, Johnson told an elaborate story about an uncle who’d barricaded himself into a town hall in East London and defied the efforts of police and fire brigade to get him out.

Only when his wife was raised to the window on a cherrypicker was the man persuaded to leave. The message was clear: Johnson thought he was going nowhere. Gove insisted he should quit. Johnson told him that in his typically polite way, the message he’d delivered was like a bullet.

But as Johnson fought his way through his regular weekly session of prime minister’s questions and then an appearance in front of a parliamentary committee, the number of officials quitting his government climbed past 50.

He returned to No. 10 after 6 p.m. for a series of meetings with his senior ministers. Chief Whip Chris Heaton Harris advised Johnson that he no longer had the numbers to prevent Tory MPs from removing him, but that he would remain loyal. Trade Secretary Anne-Marie Trevalyan and arch Brexiteer Jacob Rees-Mogg also made clear they would stay supportive. Deputy Prime Minister Dominic Raab told Johnson he would not resign, changing for a formal white-tie event and then leaving via a side entrance.

Other meetings were more difficult.

Home Secretary Priti Patel had an emotional and teary meeting with the premier where she told him he had to go. A spokesman for Patel wasn’t able to comment on the details of the conversation.

Transport Secretary Grant Shapps, who kept a spreadsheet of Johnson supporters, agreed that the numbers were against them. Policing minister Kit Malthouse delivered a long monologue about how it was over. An exasperated Johnson told Malthouse that if he was going to resign, he should just do it.

Welsh Secretary Simon Hart was the only one who threatened to quit, handing Johnson a resignation letter and telling him that if he was not gone by the morning it would be published.

The most difficult meeting was with Zahawi who looked visibly awkward, according to one witness, as he told the prime minister that he too thought he should quit. The meeting left Johnson’s aides suspecting that Zahawi had simply been preparing for his own tilt at the top job. Nadhim Zahawi at the Treasury after being appointed chancellor on July 6. Image: Dan Kitwood/Getty Images

Towards the end of the night, Johnson gathered his closest aides in his office to assess the damage.

No. 10 policy chief Andrew Griffith was the most determined to battle on, along with Nigel Adams, a minister and old friend of Johnson. Heaton Harris, the party enforcer, had accepted the situation but was staying in the bunker to the end.

Together they rehearsed arguments for and against resigning, as they briefed the media that he would not quit and appoint a new Cabinet. The reality was that no one was accepting jobs.

They enjoyed one bright moment when Gove was fired, and Johnson’s team briefed journalists that the former minister was a “snake.”

As PM sacks Michael Gove, a No 10 source says “you can’t have a snake who is not with you on any of the big arguments who then gleefully tells the press the leader has to go”https://t.co/lny3AJEPVo

But their laughter couldn’t change the political reality, and it was becoming clear that Johnson’s energy was spent.

Outside No. 10, commentators were comparing his determination to cling to power with former President Donald Trump who refused to accept an election defeat and saw his supporters storm the US Capitol. Johnson told his team that he didn’t want to spark a constitutional crisis by clinging to office.

As he went up the stairs to his Downing Street flat to see his wife, Carrie, the decision was becoming clear in his mind. Carrie did not advise him either way and insisted it had to be his own decision, according to a person with knowledge of the conversation.

Johnson woke early on Thursday and drafted a resignation speech to read out to his staff at their 7.30 a.m. meeting. “There will be many people who are relieved and perhaps quite a few who will also be disappointed,” he told the British people, as he announced his decision from the steps of No. 10 a few hours later. “And I want you to know how sad I am to be giving up the best job in the world.”

That night, some of those who might replace him attended a garden party hosted by the Spectator magazine.

Johnson’s communications chief Guto Harri got into a blazing and public row with Gove adviser Josh Grimstone, who accused Harri of briefing against his boss.

A Sunak aide spotted Harri and went over for a hug. According to people present, a smiling Sunak, standing next to her, asked Harri: “Don’t I get one?”

“You want a hug?” Harri said in disbelief, knowing that the former chancellor had made no contact with Johnson since his shock resignation. Harri had spent his week fighting to save the prime minister, Sunak was aiming to replace him, and in front of London’s political elite, the two men shared an awkward embrace.

Wotta laff …. toffs in a fizzle of egos bursting. Ya boo sucks to you Bojo.