Ukrainian President Volodymyr Zelenskiy visited troops near the front in the southern region of Zaporizhzhia, about 60% of which is occupied by the Russian army.
By Bloomberg News 6 Jun 2022  11:57 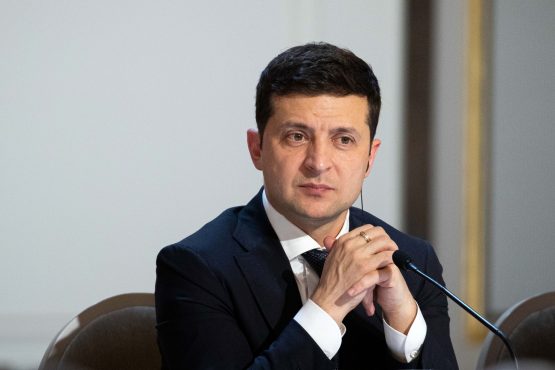 Turkey and Russia have reached a tentative deal to restart Ukrainian agricultural shipments from a key Black Sea port, but Kyiv remains skeptical of the proposed pact, according to people familiar with the discussions.

The UK plans to send rocket systems to Ukraine that will let it strike locations as far as 80 kilometers (50 miles) away less than a week after the US said it would provide similar weapons. Russian President Vladimir Putin threatened in an interview with state TV aired Sunday to strike new targets in Ukraine if longer-range missiles are delivered.

Ukrainian President Volodymyr Zelenskiy visited troops near the front in the southern region of Zaporizhzhia, about 60% of which is occupied by the Russian army.

Turkish President Recep Tayyip Erdogan’s government has offered military help to clear mines off the coast of Odesa and escort grain ships but Ukraine has yet to endorse the plan, worried that removing defenses could leave the vital port open to Russian attack, people familiar with the deal said, speaking on condition of anonymity to discuss matters that aren’t yet public.

Russian Foreign Minister Sergei Lavrov is expected to hold talks in Ankara on the plan on Wednesday. It remains unclear whether Ukraine will send a representative. “By commenting in advance on reaching the deal, Russia is seeking to shift responsibility to Ukraine” for disrupting supplies, Ukraine’s Deputy Economy Minister Taras Kachka said.

The Kremlin’s invasion has cut off shipments of grain and other farm products from Ukraine, threatening millions of people in its traditional markets with food shortages. Moscow has denied responsibility for the disruption but demanded relief from US and European sanctions limiting its exports of fertilizer and agricultural products.

The UK is to send multiple-launch rocket systems to Ukraine, Defence Secretary Ben Wallace announced. The move has been coordinated closely with the US decision to send the High Mobility Artillery Rocket System variant of MLRS to Ukraine, where forces have requested longer-range precision weapons.

“As Russia’s tactics change, so must our support to Ukraine,” Wallace said. “These highly capable multiple-launch rocket systems will enable our Ukrainian friends to better protect themselves against the brutal use of long-range artillery, which Putin’s forces have used indiscriminately to flatten cities.”

The M270 weapons system, manufactured by Lockheed Martin, can strike targets up to 80 kilometers (50 miles) away with high accuracy, according to a statement released by the Ministry of Defence. The UK will also supply M31A1 munitions “at scale.”

The US has told more than a dozen countries that Putin’s government is trying to sell plundered wheat from Ukraine to drought-stricken African nations, the New York Times reported citing a diplomatic cable.

The paper said that in mid-May, the US sent a notification to 14 countries, mostly in Africa, of Russian cargo vessels leaving ports near Ukraine laden with what the cable said was “stolen Ukrainian grain.”

Ukraine has accused Russia of looting grain in occupied areas and selling it abroad, and local traders have said Russian troops have confiscated grain, equipment and fertilizers in occupied areas in the country’s southeast.

Author has not been to Russia or Ukraine, you can tell.