Ukraine accused President Vladimir Putin of carrying out a full-scale invasion after the Russian president said he ordered a special military operation to ‘protect’ the Donbas region of eastern Ukraine.
By Bloomberg News 24 Feb 2022  06:46 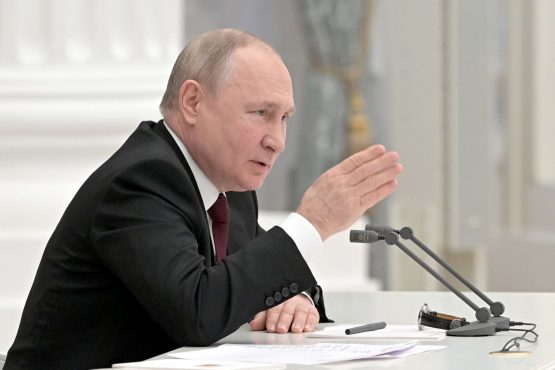 Ukraine accused President Vladimir Putin of carrying out a full-scale invasion after the Russian president said he ordered a special military operation to “protect” the Donbas region of eastern Ukraine.

Ukrainian Foreign Minister Dmytro Kuleba said on Twitter that cities in the country were being hit by airstrikes. The US and its allies have for weeks warned of the potential for an attack, including on the capital, Kyiv, estimating Putin had massed 150 000 troops on the border.

Putin said Russia doesn’t plan to occupy Ukraine, while urging soldiers there to put down their arms. He was condemned by US President Joe Biden, who called his actions an “unprovoked and unjustified attack by Russian military forces” on the people of Ukraine, and by NATO Secretary General Jens Stoltenberg, who said it was a “serious threat to Euro-Atlantic security.”

Foreign Minister Dmytro Kuleba said in a tweet that Putin has “launched a full-scale invasion of Ukraine” and cities are under airstrikes.

“This is a war of aggression. Ukraine will defend itself and will win,” he said. Kuleba said the world can and must stop Putin, adding “the time to act is now.”

Ukraine closed its airspace for passenger flights, according to a notice Thursday. Russia has also put in place flight restrictions over Ukrainian territory.

Putin accused the US of ignoring Russia’s demands for security guarantees and crossing its “red lines” with an expansion of NATO infrastructure east.

In his televised speech he said he aimed to demilitarise Ukraine. “Russia can’t exist with a constant threat from the territory of Ukraine,” he said.

Putin has long warned that Russia views expansion of the North Atlantic Treaty Organisation in eastern Europe as a threat and he couldn’t tolerate Ukraine joining the alliance. In December, he demanded the US and its allies provide legally binding security guarantees that the alliance not expand further and not put offensive weapons in Ukraine. Those demands were rejected.

NATO contends that it’s a defensive alliance and isn’t a threat to Russia.

I strongly condemn #Russia’s reckless attack on #Ukraine, which puts at risk countless civilian lives. This is a grave breach of international law & a serious threat to Euro-Atlantic security. #NATO Allies will meet to address Russia’s renewed aggression. https://t.co/FPpyuzmUXD

Biden said in a statement that “Putin has chosen a premeditated war that will bring a catastrophic loss of life and human suffering,” adding Russia alone would be responsible for “the death and destruction this attack will bring.”

Biden said he would speak with Group of Seven counterparts Thursday and then address the American people to announce further punishments for Moscow. “The world will hold Russia accountable,” Biden said.

US equity futures and stocks slid on the back of the Putin’s escalation. S&P 500 and Nasdaq 100 contracts tumbled more than 1%, European futures shed over 2% and an Asia-Pacific equity gauge fell to the lowest level this month.

Treasuries, the dollar and gold climbed, reflecting demand for havens. Brent oil surged to $100 a barrel for the first time since 2014 as Russia’s escalation sparked fears of a disruption to the region’s critical energy exports. Russia is a key supplier of energy to global customers, with Europe relying on the nation for about a quarter of its oil supplies and a third of its gas.

Ukraine President Volodymyr Zelenskiy said in an address to the nation that any Russian move to aid separatists in the eastern part of Ukraine could cause an escalation in tensions.

Ukraine poses no threat to Russia but will defend itself if attacked, Zelenskiy said in his speech. He said Putin didn’t respond to a request to talk by phone on Wednesday. Earlier, Ukraine’s foreign minister said he would seek another emergency session of the UN Security Council.

It wasn’t clear what specific aggression the leaders believed they needed assistance with. Ukrainian officials have repeatedly said they have no plans for a military offensive against the separatists.

Asked about the request, White House Press Secretary Jen Psaki called it an example of the type of “false flag” operation that the US has said was likely to occur.

After hours of debate, Ukraine’s parliament agreed to approve Zelenskiy’s decree to impose a national state of emergency over the rising tensions with Russia.

The decree takes effect beginning midnight February 24 for 30 days. The declaration gives authorities the power to issue decrees on issues including the movement of people inside specific regions, curfews, restrictions on mass gatherings and evacuations. Local authorities will decide which restrictions to implement.