Russian rockets hit an apartment building in Chasiv Yar, Donetsk, where at least 15 civilians were reported killed and many were trapped under rubble as the Kremlin’s forces were grinding their way through the region.
By Bloomberg News 11 Jul 2022  09:23 The risk of a euro-area recession is growing as the likelihood of natural gas shortages rises and inflation remains at record levels, according to economists polled by Bloomberg. Ukraine’s foreign ministry called on Canada to reverse its decision to return repaired Nord Stream 1 turbines to Germany.

Russian rockets hit an apartment building in Chasiv Yar, Donetsk, where at least 15 civilians were reported killed and many were trapped under rubble as the Kremlin’s forces were grinding their way through the region.

Kremlin forces have control of most of the Luhansk province and are grinding west into Donetsk. At least 15 people were killed and dozens trapped when a Russian missile struck an apartment building in Chasiv Yar. Russia is looking to hinder Ukraine’s attempts to push its forces away from Kharkiv, according to the Ukrainian general staff. Russian troops hit the city with an “Iskander” cruise missile. Russia is probing Ukrainian defenses further west near Slovyansk, according to the military. Ukrainian forces hit a base of Russian troops in the occupied city of Kherson, Interfax reported, citing an adviser to the regional governor Serhiy Khlan.

The probability of an economic contraction has increased to 45% from 30% in the previous survey of economists polled by Bloomberg and 20% before Russia invaded Ukraine. Germany, one of the most-vulnerable members of the currency bloc to cutbacks in Russian energy flows, is more likely than not to see economic output shrink.

The rising cost of living is taking an increasing toll on business and consumers who’re emerging from two years of the Covid-19 pandemic. Lower shipments of gas from Russia, meanwhile, pose a threat to winter energy deliveries. 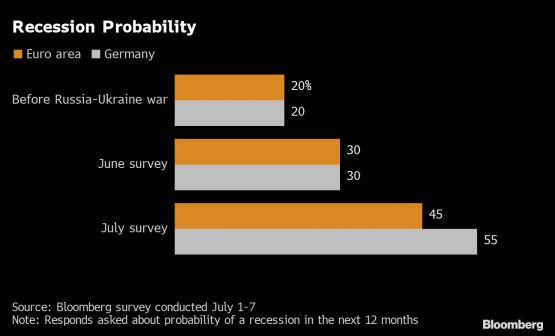 Zelenskiy has asked military chiefs to draw up plans for retaking Russian-occupied region in southern Ukraine that are vital to the country’s economy and can count on a force about 1 million strong, The Times quoted Defense Minister Oleksii Reznikov as saying in an interview.

Reznikov said he’s reaching out to counterparts in partner countries. Ukraine’s recent withdrawals from two cities in the Luhansk region, Severodonetsk and Lysychansk, were tactical losses necessary to save lives, rather than strategic defeats, he told the Times.

Over Kyiv’s objections, Canada announced late Saturday that it would “grant a time-limited and revocable permit for Siemens Canada to allow the return of repaired Nord Stream 1 turbines to Germany.”

German Economy Minister Robert Habeck had publicly pleaded for the release of the parts, saying they need to return before pipeline maintenance starts on Monday — eliminating an excuse for Moscow to keep the vital gas conduit closed. US Commerce Secretary Gina Raimondo said an international price cap on Russian oil is feasible. Asked on ABC’s “This Week” about skepticism that it would work, she said: “I think it can.”

Promoted by economists such as US Treasury Secretary Janet Yellen, the idea faces geopolitical and practical challenges. Raimondo added that US gasoline prices have increased by more than $1.50 per gallon since Russian President Vladimir Putin began his war against Ukraine: “And so, we need to do everything we can to end that war as quickly as possible.”

Ukraine’s defense minister said Kyiv has “passed the test” with the successful use of recently delivered US long-range artillery systems, and put in an urgent plea for more armored vehicles and drones.

The M142 High Mobility Artillery Rocket Systems (HIMARS) have been a “game changer,” Reznikov told the Wall Street Journal in an interview.

Still, the need for longer-range weapons continues to outpace the Ukrainians’ demand for shorter-range systems as the war, now mostly an artillery battle, grinds through its fifth month, he said.

At least 15 people were killed and 20 more are believed buried under tons of wreckage. A handful have been pulled out alive. An emergency services official told the BBC that another high-rise block was hit nearby.

Chasiv Yar is one of a string of towns under heavier bombardment as Russian troops press deeper into Donetsk after securing control of Luhansk.

President Volodymyr Zelenskiy will soon announce a cabinet reshuffle and consolidation of Ukraine’s ministries in a bid to weed out waste and corruption, according to people familiar with the plans.

The move comes after Ukraine in the past week set out a blueprint for post-war reconstruction that will rely on hundreds of billions of dollars from the world’s biggest economies.

French Finance Minister Bruno Le Maire said Europe must prepare for Russian gas deliveries to be shut off entirely in retaliation for the region’s sanctions on the Kremlin and support for Ukraine.

“Let’s prepare ourselves for a total cut-off of Russian gas,” Le Maire said at an economic conference in Aix-en-Provence, southern France, on Sunday. “That’s the most likely scenario today.”

Comments by Russian-backed occupation authorities that the Kharkiv region is an “inalienable part of Russian land” suggest Moscow intends to annex part or all of the area, which includes Ukraine’s second largest city, said analysts at the Institute for the Study of War.

The speed in establishing a civilian administration and introducing martial law in occupied areas of the region this month shows “the Kremlin is aggressively pursuing the legitimization and consolidation” of the occupation administration’s power “to support this broader territorial aim,” the US-based think tank said in a report Saturday.

Canada will “grant a time-limited and revocable permit” to support Europe’s ability to access reliable and affordable energy in the transition away from Russian oil and gas, a spokesman for the Ministry of Natural Resources said in a statement.

German Vice Chancellor Robert Habeck publicly pleaded with Canada for the release, saying the equipment needs to return before Nord Stream 1 maintenance begins on Monday — eliminating an excuse for Russia to keep the conduit closed.

President Volodymyr Zelenskiy dismissed his ambassador to Germany, Andriy Melnyk, along with ambassadors to Hungary, the Czech Republic, Norway and five Asian countries, including India, according to decrees on the presidential website.

In a nightly speech to the nation, Zelenskiy said the firings were “a normal part of diplomatic practice” and that new candidates were being prepared by the foreign ministry.

Melnyk has been viewed as controversial in Germany for strongly-worded comments and Twitter posts, including what he decried as hesitation by Chancellor Olaf Scholz’s government to expedite modern weapons to Ukraine. Israel’s embassy in Berlin recently criticized Melnyk, saying he had belittled the Holocaust in an interview, an accusation he called “absurd.”

The US will provide another $368 million in humanitarian aid to those affected by the Russian invasion of Ukraine, Secretary of State Antony Blinken said in a statement.

The new funds take US humanitarian assistance since the war started in February to over $1.28 billion, said Blinken, who’s in Bali for the G-20 foreign ministers meeting.

Zelenssky’s now the West useful idiot-in-chief and leader of the new free world.

If it wasn’t for putin’s invasion of a democratic country that voted 90% in 90% turnout referendum to not be part of mother russia, almost nobody would know Zelensky.

But sure, spread your recurring pro-putin propoganda.

It’s not propaganda, but more balanced narrative that includes the US’s role in this mess. your not tangoing as one. So, unless you allow a nation like Russia full integration into the West and the Western Economy you get what the US wanted, Russia as perpetual enemy.

Talking about useful idiots. Russia really loves them. You are playing your part…

Putin anyway does not want to be integrated in the west’s principles of freedom of the press, economic freedom, freedom of association, democracy. Free countries also frown on state assassinations, pillage of state companies for corrupt gains and invading democratic nations.

Yes absolutely : Russia is for the rest of my life a perpetual enemy. Me, they definitely don’t care. However, supplier selection in the rest of the world : russia is toast for three decades. Besides being shunned wherever possible as supplier for decades, they will not get supplied with computer chips or technology as basic as pump controllers until Ukraine is made whole. If they carry on, they are in early industrial age – think 1880

I’d love to see Trudeau on Canadian TV after a Russian missile comes whistling over the North Pole and destroys an apartment block in Ottawa. With his citizens screaming in panic in the streets.

Oh yes, it can happen.

You surely will turn a blind eye to someone being hurt in front you so that your a** doesn’t get kicked as well.
It makes no sense to expose oneself to danger right?