While the Truss campaign hasn’t set out specifics, economists and observers parsing her comments see a few options for her government.
By Reed Landberg and Celia Bergin, Bloomberg 3 Aug 2022  08:16 Liz Truss could sharpen the Bank of England’s focus on fighting inflation in a shakeup of the central bank’s mandate if she becomes the next UK prime minister.

The foreign secretary, who is leading in the race to replace Boris Johnson as leader of the ruling Conservative Party, has said she will revisit the remit that the government hands to the BOE.

While the Truss campaign hasn’t set out specifics, economists and observers parsing her comments see a few options for her government. With inflation at a 40-year high of 9.4% and set to climb higher, the focus for now is how to reduce the risk of a damaging wage-price spiral. “Its about reevaluating the role of the Bank of England and whether the remit is substantial enough for the economic situation,” said Gerard Lyons, a senior fellow at Policy Exchange and supporter of Truss’s plan for the UK.

For now, economists don’t anticipate a major shift away from the BOE’s current framework, which was set up in 1997 by Labour Prime Minister Tony Blair and his Chancellor of the Exchequer Gordon Brown.

Under the current system, the BOE’s Monetary Policy Committee is told to hold inflation to 2% at all times and to have regard for the Financial Policy Committee, which oversees risks in markets and the banking system. The FPC’s remit includes language about supporting the government’s other policies, notably the UK’s shift to net-zero fossil fuel emissions.

Truss has said she supports the BOE’s independence to make operational decisions and that her interest is in revisiting the guidance that has changed little since Brown set it out 25 years ago.

“If she’s saying we should review what BOE does and approaching this in a way that takes into account the latest thinking on monetary policy generally that would be a good idea,” said James Smith, research director at the Resolution Foundation. “But if it means imposing a particular type of target without a due review process, that risks eroding UK policy.”

Here’s a list of the things Truss could do:

The UK started targeting inflation to manage the economy in 1992 after the pound fell out of the European Union’s Exchange Rate Mechanism. After the BOE won independence to set interest rates in 1997, its goal was to keep inflation to 2.5% based on the Retail Price Index.

In 2003, the mandate changed to 2% based on the separate measure known as the Consumer Price Index, which is harmonized to EU standards. Britain’s Office for National Statistics has talked about phasing out the RPI measure, though that’s been difficult since it’s linked to annual increases for pensions rail fares as well as government bonds whose payouts climb with inflation. Truss could revisit those arrangements or even increase the target itself. But the issue at the moment is not the goal itself but fact that the BOE missed the goal.

“It may actually be to increase the importance the primary objective of the BOE to actually tackle inflation,” said Kallum Pickering, an economist at Berenberg.

Truss has mentioned the possibility of widening the goal to include a measure of money supply or gross domestic product.

The case for a target combining growth and inflation is that it is more responsive to economic shocks. Rather than targeting prices, the BOE would be tasked with controlling the total amount of spending in the economy. If nominal GDP was deemed to be growing too slowly, policy makers would seek to generate inflation by relaxing monetary policy, and vice versa. In effect, the BOE would try to keep the cash value of the economy growing. 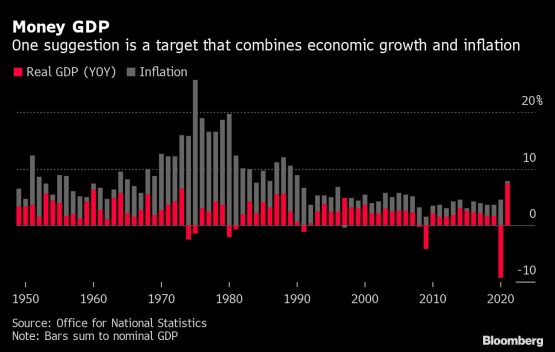 Critics say a money GDP target risks storing up future inflationary problems at times when growth is weak, given that monetary policy has a delayed impact on the economy. It is also less easily understood by the public at large than a simple inflation target. In the UK, a switch was reviewed and rejected a decade ago, although Policy Exchange made a renewed case for a growth in 2020.

Earlier in the race Truss indicated she might give the BOE a money supply target to ensure it is “tough on inflation” if she replaces Johnson, hinting at a partial revival of 1980s monetarism.

“We have inflation because of our monetary policy,” she said. “We have not been tough enough on monetary supply. That’s the way I would address that issue.” Another suggestion is for members of Parliament to have greater oversight of the BOE’s work. At the moment, the Treasury Committee, which draws in lawmakers from across the political spectrum, calls in BOE officials periodically to give testimony about the state of the economy and markets.

Those hearings could become more frequent, or MPs could be asked to make recommendations more often, putting political pressure on the central bank to act.

The Treasury Committee also reviews the people appointed to serve at the bank. While it has no formal power to reject them, its concerns in years past have prompted a nominee to withdraw. Those powers could be made more formal or tougher.

Since the global financial crisis more than a decade ago, the BOE created £895 billion of money to buy government bonds, with the explicit blessing of the Treasury. Quantitative easing was meant to keep a lid on borrowing costs in financial markets and stabilize the system against shocks.

That stimulus program was extended during the pandemic. Now, critics including Patrick Minford, who is advising Truss, say QE added to inflation. 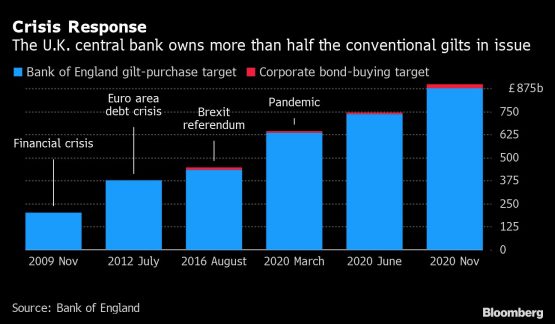 At the moment, the BOE is pivoting quickly away from QE, planning to set out details of asset sales that from the portfolio built up in a process known as quantitative tightening. Still, policy makers retain QE as a potential tool.

Truss could rule out further use of QE. The effect would be more political, essentially blaming Rishi Sunak, the former chancellor her competitor in the leadership race, for the soaring prices the UK is now experiencing.

Water down the green mandate

Another issue is the BOE’s green mandate. Johnson’s government set the UK on a path toward “net zero” greenhouse gas emissions by 2050, a goal that requires shifting away from polluting fuels like oil, natural gas and coal and toward nuclear and renewables.

That effort could destabilize the financial system if it’s implemented too quickly for companies and investors to adapt. The BOE’s mandate is to “have regard” to those goals “where practical and relevant,” mainly in its remit to detect risks to the economy.

Those words, most recently endorsed by Sunak when he was chancellor in April, have prompted the BOE to become a leading voice in the shift away from fossil fuels. Tweaking the language could lower the BOE’s profile in that debate.