The golden age of the City of London began with a big bang. It’s ending with a whimper.

Fears that the finance powerhouse that emerged from Margaret Thatcher’s 1986 deregulation — known as the Big Bang — will gradually be dismantled have deepened with a recent flurry of announcements about some business heading to the European Union as Britain enters the last month of the Brexit transition period without a financial-services deal in sight.

The latest shift comes Monday at 8 a.m., when London Stock Exchange Group Plc’s stock trading platform Turquoise Europe goes live in Amsterdam. It joins other trading venues like Cboe Europe and Aquis Exchange Plc setting up shop on the continent as part of their no-deal Brexit plans, a contrast with the late 1980s, which ushered in a period where London became the place to be for equities trading.

“The City of London has been thrown to the lions,” said Alasdair Haynes, chief executive officer at Aquis, adding that the UK could lose even more stock trading than it expects if giant US asset managers like BlackRock Inc. decide to trade in Paris and Amsterdam.

Last week, Goldman Sachs Group Inc., said it had applied to French regulators to open its SIGMA X Europe stock platform in Paris from Jan 4. Goldman partner Elizabeth Martin said that she expects most of the 8.6 billion euros ($10 billion) a day in London-based European share trading to shift to the bloc. 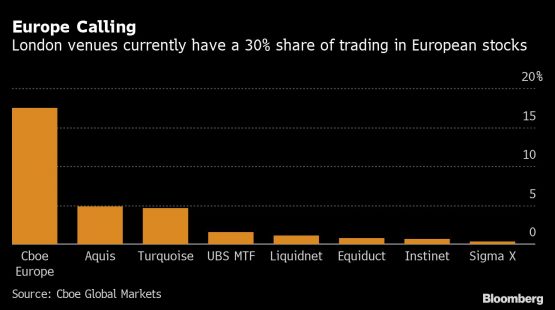 Aquis has already established a platform in the French capital. It went live with more than 1,700 European shares earlier this month. Other trading venues like Liquidnet have outposts in Dublin to ensure they can service clients.

“We are expecting a big bang on January 4,” said David Howson president of Cboe Europe, the largest of London’s stock trading platforms, which opened its own venue in the Dutch capital last year. “The industry has never had to move this much flow overnight.”

It’s not just stock dealing that’s shifting. Brussels disappointed London swap traders last week when its markets regulator said that derivatives need to change hands on EU-based platforms from January. That means trillions of dollars of transactions is at risk of being transacted outside of the UK.

The bloc has already made a land grab for London’s euro swaps clearing business, urging its banks to accelerate a shift to Europe. Deutsche Boerse AG’s Eurex Clearing has built up a 19% share of the business over recent years although it is dwarfed by London’s market share.

In recent weeks, Goldman and JPMorgan Chase & Co. have indicated that between them more than 300 staff will move to continental cities. Goldman is shifting as much as $60 billion in assets to Frankfurt, while JPMorgan is moving about $230 billion to the German city.

Consultancy EY said in a report last month that the 7,500 roles and 1.2 trillion pounds ($1.6 trillion) in assets that have moved already may just be the beginning. It expects further shifts in personnel and assets once the UK’s transition period officially ends.

That bodes ill for the UK, where finance employs more than one million people, makes up about 7% of the economy and accounts for more than a 10th of all tax revenue. Despite that, the industry has garnered little of the attention bestowed on fishing, which makes up just 0.1% of the UK economy, in the protracted Brexit negotiations.

To be sure, London’s long-standing advantages of the English language and legal system and a deep talent pool mean it won’t be overtaken anytime soon. And a last-minute agreement with the EU on financial services could still happen.

The LSE said it would call off its plan for Turquoise Europe if the European Union declared that Britain can host trading services for EU shares, part of a process known as equivalence. Such an agreement remains a possibility.

But time is running out. And without an agreement London’s status as Europe’s financial hub will no longer be in its hands.

“The kingmakers here will be the Americans,” Aquis CEO Haynes said. “There’s no guarantee they will still trade in London. They will follow the liquidity.” Or are there better investments I could make? 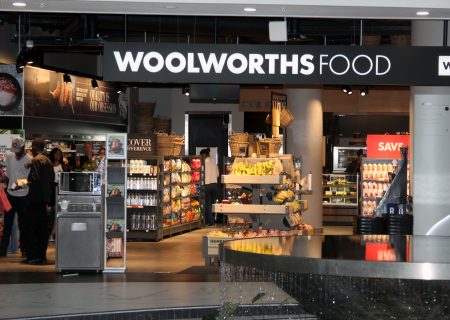