The open outcry pit at the London Metal Exchange in London. Image: Bloomberg

Almost every day for the past 144 years, traders engaged in shouting matches at the London Metal Exchange to set the global price of copper and other vital commodities. Now, just as the metals industry gears up for a global boom, one of its most iconic scenes may never return.

The trading floor known as “the Ring” fell silent last year, as Covid-19 spread through the city of London. At one of the last open-outcry trading venues in the world, the raised voices, shared telephones and physical jostling among LME floor dealers made for a social-distancing nightmare.

The exchange and its members insisted the closure was temporary — until now. On Tuesday, the LME laid out a proposal to close the Ring for good and shift permanently to an electronic trading system for establishing the world’s benchmark prices for industrial metals.

The plan, which the exchange says could increase transparency and boost volumes, sets it at odds with some of its longest-serving members, even if they seem to be facing the likely death of the Ring with reluctant acceptance.

“It’s the end of a very long era and a very sad day,” Nick Fellowes, managing director at Amalgamated Metal Trading, said by phone. “We still have serious concerns about how the exchange will continue to operate efficiently during periods of illiquidity and uncertainty.”

Traders have been dealing metals in London ever since a circle was first drawn in the sawdust in a coffeehouse off Cornhill in the early 19th Century. The LME was formally established in 1877, and the Ring survived as the pre-eminent venue for metal trading though world wars, scandals and ruinous defaults.

If the LME follows through on the plan, it’s likely to be a blow to the smaller brokers that specialise in metals trading. The Ring is central to some of their businesses — and the heart of a thriving community of metal trading that has made London its home since before the LME existed.

“I’m one of an ever-shrinking number who are still very much behind the continuation of the Ring,” said Michael Overlander, chairman of Ring dealer Sucden Financial Ltd. “Markets have always been dependent on their participants. To actually meet face-to-face and eyeball-to-eyeball with your competitor still brings a spark to a marketplace that no other exchange I know of can boast.”

LME chief executive officer Matthew Chamberlain said in an interview that he shares his members’ love for the Ring — famous for its red sofas and strict rules — but that the exchange needs to change with the times.

“It is tough in that sense, but we can’t let that get in the way of what we believe is best for the next 140 years,” he said.

Much of the trading on the LME already takes place electronically and a shrinking number of brokers have taken their seats in the Ring over the years. Yet in preserving the trading floor, the LME has partly resisted the headlong push into digitisation and automation seen in the wider financial markets.

Other leading commodity markets, like the New York Mercantile Exchange and the International Petroleum Exchange, where benchmark oil contracts are traded, closed their open-outcry trading floors years ago.

The relatively smooth functioning of the market since the pandemic struck has undermined the argument that the Ring was the only way that prices could be established for the LME’s complex system of contracts. And many participants in the metals markets — from investors to manufacturers — accept the LME’s argument in favor of pushing more trading onto its electronic platform.

“This can come as no surprise to market participants, given the floor has now been closed for the past 10 months,” said Simon Van Den Born, president of Marex Spectron, one of the largest Ring dealers. “Given our scale and market share in many metals products, we are in a good position to take advantage of this development.”

The Ring’s detractors have long argued it’s an anachronism that should be consigned to the history books. But the trading floor has deep roots in the physical markets, and its supporters argue that, while membership has diminished, it serves the global metals industry as well today as it did in Victorian times. 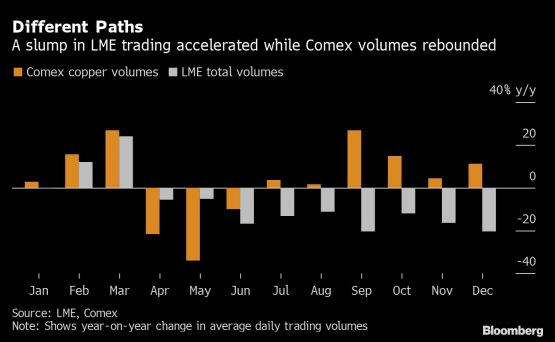 The move comes just as the City of London is fighting to retain its dominance, with institutions picking through the implications of the U.K.’s exit from the European Union.

The stakes are high for the LME too, as rival exchanges will likely see an opening to lure users of the Ring onto their own electronic platforms. The change comes just as metals and other commodity prices are surging.

Trading volumes on the LME fell to the lowest level in a decade last year as the pandemic ravaged major industrial economies. Some brokers say the closure of the floor also contributed meaningfully to the drop.

Alongside its proposal to close the Ring, the LME also suggested several other changes to encourage electronic trading and to lure more financial investors to the market. They include cutting some fees on trades that go through the LME’s electronic platform and raising them on trades that do not, as well as changing the system for calculating margin.

The proposals are being put up for discussion until March 19, and the LME plans to make a final decision before the end of the second quarter.

“We deeply respect the Ring, we love its traditions and it’s been fantastic for the LME,” Chamberlain said. “But we’ve always said that it’s appropriate to evolve the market as the overall industry moves on and as the needs of our participants move on.”

So the Ring might see its ring after all.

…a real case of ring sting?

Although a great tradition, the Ring mainly allowed a small group of traders to manipulate metal prices. They have been resisting this change for 10 years or more.

The vaccine revolution is coming inside tiny bubbles of fat

The vaccine revolution is coming inside tiny bubbles of fat